Demonstrators gather in Tel Aviv and in front Ugandan embassies in cities around the world to protest Israel’s plan to deport tens of thousands of Eritrean and Sudanese asylum seekers to Uganda. 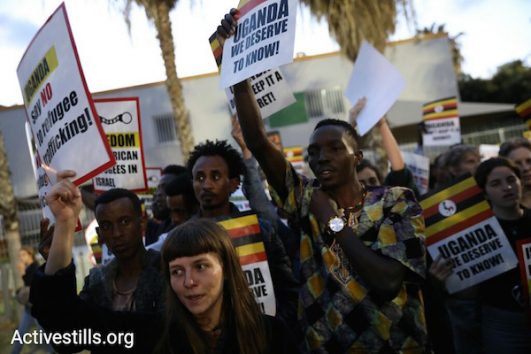 Asylum seekers and activists protested in Tel Aviv and outside Ugandan embassies around the world on Monday against Israel’s plan to deport tens of thousands of asylum seekers there. After international pressure led Rwanda to back out of a secret agreement to accept asylum seekers deported from Israel, Israel now claims it has an identical agreement with Uganda.

The demonstrations come just one week after the Israeli government announced it was abandoning its plan to deport the African asylum seekers, most of whom fled Eritrea and Sudan, to Rwanda after reaching an agreement with the UN Refugee Agency. Under the agreement, UNHCR was supposed to work to resettle 16,250 asylum seekers in Western countries; Israel would provide legal status to the asylum seekers who remained in Israel.

A day after announcing the agreement, however, Netanyahu cancelled it due to intense criticism from the Right. The Israeli government now claims that “a second third country” — widely believed to be Uganda — has agreed to take in refugees deported from Israel.

In a brief to the High Court of Justice earlier in April, Israel’s attorney general wrote that Israel in fact had secret agreements with two countries to take in asylum seekers forcibly deported by Israel. A “special envoy to third countries” departed Israel for the “second third-country” Wednesday morning, April 3, to ensure it would not back out of its allegedly secret agreement with Israel.

Uganda has denied the existence of any agreement. Ugandan Foreign Minister Henry Okello Oryem told AP that his country will turn back any deported asylum seekers sent there. “We do not have a contract, any understanding, formal or informal, with Israel for them to dump their refugees here.” 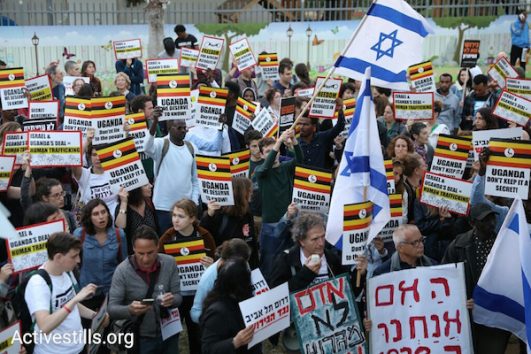 Asylum seeker and international activists are hoping to repeat the success of the earlier campaign that forced Rwanda to pull of out its secret agreement with Israel. The combination of anti-deportation rallies across Israel and around the world, activists and journalists (+972 Magazine included) working to expose how both Rwanda and Uganda refuse to actually absorb the refugees deported by Israel, public and international on the Rwandan government, and strategic lawsuits challenging the deportation plan itself all played a role in forcing Rwanda to cancel its secret agreement with Israel. 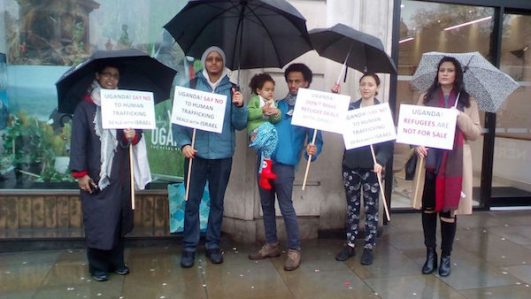 Activists brave the rain to protest outside the Ugandan embassy in London. April 9, 2018. (Courtesy of Uganda Say No, London)

Activists in Berlin protest outside the Ugandan embassy against Israel’s plan to deport tens of thousands of refugees. April 9, 2018. (Courtesy of Liat Bolzman, photo by Ron Rothschild) 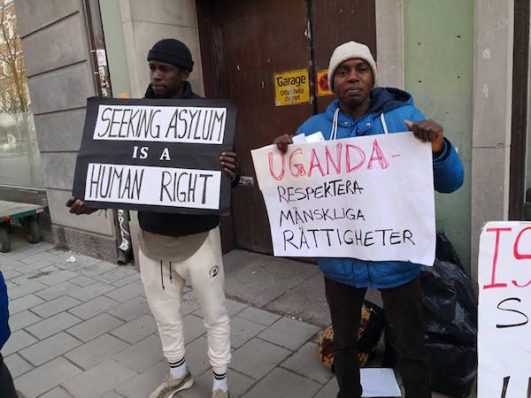 Activists in Stockholm protest outside the Ugandan embassy against Israel’s plan to deport Eritrean and Sudanese refugees there. April 9, 2018. (Courtesy of Netta Beer)

Activists in Paris protest against Israel’s plan to deport asylum seekers to Uganda. April 9, 2018. (Courtesy of Roni Geffen)
Get Our Weekly Newsletter
Before you go…
A lot of work goes into creating articles like the one you just read. +972 Magazine is nonprofit journalism, owned by many of our writers, editors, and journalists. In order to safeguard that independent voice, we are proud to count you, our readers, as our most important supporters. With your support, we can keep +972 Magazine a strong, independent, and sustainable force helping push the global discourse on Israel/Palestine.
DONATE
More About News