Dozens of European diplomats and senior figures from across the Palestinian political spectrum joined hundreds of activists in the opening of the 6th International Bil’in Conference on Popular Resistance. Palestinian Prime Minister Salam Fayyad, called for the international community to promote Palestinian self determination. 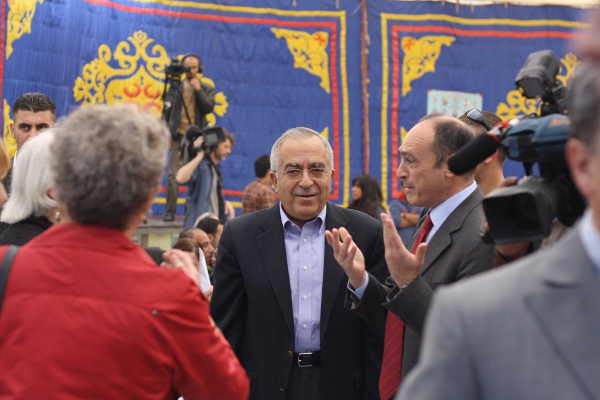 Cindy Corrie, the mother of the murdered International Solidarity Movement activist Rachel Corrie spoke of the tragedy which all mothers, both Israeli and Palestinian, have experienced in the course this conflict. She applied to the civil society on both sides to embrace nonviolent tactics.

More than 20 diplomats from around the world attended the opening, including Christian Berger, Representative of the European Commission and the Consul Generals of Britain, Spain, Italy, Belgium, Romania, Poland and Austria. The United States, France, Sweden, Germany, the Czeck Republic, Hungary and Ireland have also sent lower level diplomatic representation.

In a live video feed from the Gaza Port, Jaber Wishah of the Palestinian Center for Human Rights in Gaza, announced the launching of a naval peace team that will accompany Gazan fishermen and report on human rights violations as part of the Civil Peace Service Mission – Gaza. The project is supported by more than 50 international and local organizations, including the Popular Struggle Coordination Committee. The opening was followed by a panel on strategies and tactics of the popular struggle, including a greater role of women. The applicability of the Tunisian and Egyptian revolutions were discussed in detail.

See here for a complete schedule of the conference.