Some 500 high school students and teachers demonstrated at the entrance to the town of Kiryat Tivon Saturday night to show their support for Adam Verete, a local teacher who is facing possible sacking over proclaiming his left-wing political views in class. 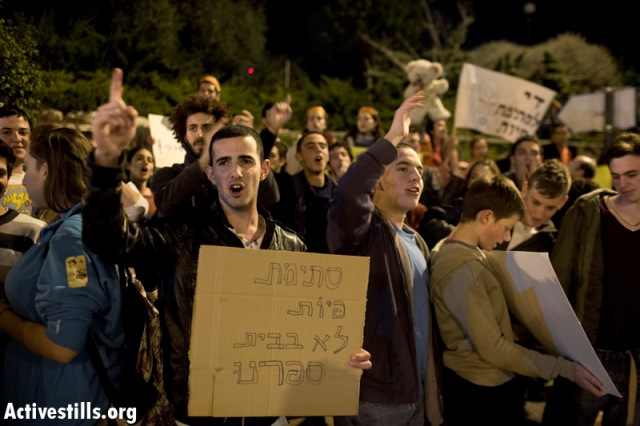 The usually tranquil town of Kiryat Tivon, just outside of Haifa, was rattled this past week over the local ORT high school’s attempts to fire philosophy teacher Adam Verete following a student’s accusations that he made derogatory remarks against the IDF and the State of Israel. The story was all over the national news with Verete’s students and colleagues leading a campaign of support for him. The Knesset Education Committee debated the case but it has been completely ignored by the Education Ministry. Verete will face a second hearing at the school later this week, which will determine whether or not he keeps his job.

At the Kiryat Tivon protest Saturday night high school teachers, students and their parents were adamant in their support of Verete, chanting “free speech is great – in the classroom and the street” and “We will not let sacking silence our teachers.” They demonstrated at the entrance to town carrying signs and candles, some with tape over their mouths, for a little over two hours. A small group of a dozen or so far-right wingers staged a counter-protest, calling to banish all leftists from the country and at some point throwing a few eggs at the main protest. No one was arrested.

Although Verete is being persecuted for his left-wing views, protestors tried to focus their calls on free speech and the need for critical thinking in schools. When Prof. Gaby Solomon, winner of the Israel Prize for Education, gave a speech saying that the right-wing regime has to be stopped, many called out against him saying that was not at all the case.

Another controversy between demonstrators centered on the extent of their protest’s demands. Some said they just wanted to support Verete and help him keep his job. Others demanded that both the school’s principal and the head of the ORT school network  be fired. A third and more far-reaching demand by some was that ORT be removed altogether from Kiryat Tivon and replaced with a locally run school – like the school was structured up until some 20 years ago. 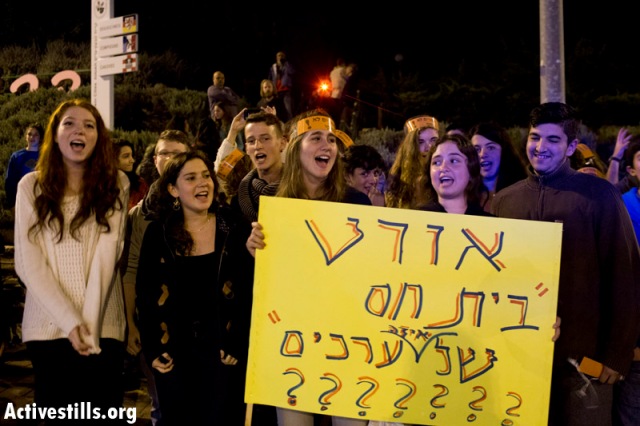 “When I first came to this school our work was all about encouraging critical thinking and debate,” said Aviva Sela, a teacher of literature at ORT Kiryat Tivon who came to support her colleague. “We used to organize trips as alternatives to those visiting concentration camps in Poland, trips within Israel, raising questions about our neighbors, our identity, morals, the army and enlistment.”

“We used to say that the true [matriculation] exams are not the ones taken in writing but the ones our students face in the outside world. This was not just the attitude of one teacher like Adam – it was what the whole school was about,” Sela added.

“In recent years everything started becoming about grades and filling out forms, and our options of making educational dreams come true has been greatly limited. The one good thing about this passing week is that once the teachers’ committee in the school stated that we all support Adam the atmosphere has changed. We feel empowered once again, and we feel it is a time for change.”