High Court extends an injunction against the planned mass deportation of African asylum seekers, but those already locked up for refusing deportation will spend the ‘festival of freedom’ in prison. 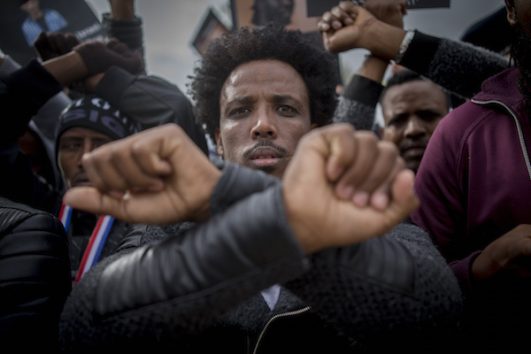 African asylum seekers protest outside the Kneeset and the Supreme Court against the new “Rwanda or Saharonim” policy of the Israeli government. January 2017. (Yonatan Sindel/Flash90)

Hundreds of African asylum seekers will remain in Israeli prisons this Passover, their fate on hold after the country’s High Court gave the government an extension — for the third time — to respond to a petition challenging the mass deportation of asylum seekers originally planned to start this Friday.

The court issued an injunction on March 15 against the deportations themselves, but Israeli authorities are still permitted to hand out deportation notices. The roughly 300 asylum seekers already imprisoned for refusing “voluntary deportation” to Rwanda or Uganda will remain behind bars until the justices make their final decision.

“It is inconceivable that the Jewish people will celebrate Passover while hundreds of asylum seekers wait in prison until the state is so kind as to submit its updated response to the court,” wrote Attorney Eitay Mack in response to the state’s request for yet another delay in the case.

Israel claims that Sudanese and Eritrean asylum seekers who agree to go to a “third country,” which Israel refuses to name but are known to be Rwanda and Uganda, will be able to live and work there legally. A +972 Magazine investigation earlier this year in Rwanda and Uganda, however, found not only that they are often denied legal status — they are often forced out of the country within days of their arrival. 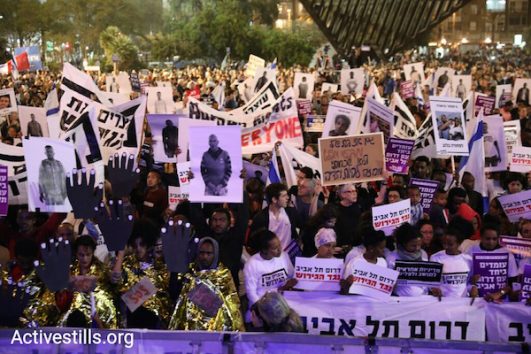 The most serious legal challenge to the deportation plan yet, the current case targets the secret agreement with Rwanda that Israel says allows for the forced, mass deportation of asylum seekers — but which Rwanda has repeatedly denied even exists. The High Court approved a previous agreement with Rwanda in secret, but the petitioners claim changes have been made to it, and, therefore, that the court must reconsider its position, including whether current Israeli law even gives the government authority to carry out the mass deportations.

During a hearing earlier in March, the High Court justices expressed concern about Rwanda’s denial of the agreement’s existence, particularly about what this means for deported asylums seekers’ access to legal recourse if they are denied the protections Israel claims they will receive in Rwanda.

An estimated 38,000 asylum seekers, most from Eritrea and Sudan, currently live in Israel. The Israeli government announced in January that the asylum seekers had three months to leave the country. If they refuse to leave, they face indefinite imprisonment.

Israel’s lack of a clear asylum policy and its failure to make information available to applicants has made it almost impossible for would-be refugees to submit successful asylum requests. Only 15,000 of the roughly 38,000 asylum seekers living in Israel have managed to submit requests for refugee status; Israel has reviewed just 7,000 of them.

To date, Israel has recognized only one Sudanese national and 11 Eritreans as refugees. In contrast, 94.1 percent of Eritrean asylum seekers are recognized as refugees in Europe. Israel’s low recognition rate is unparalleled in almost any other country with a functioning asylum regime.

Over the past month, several additional legal cases have taken aim at Israel’s mass deportation plan. Following a court ruling that desertion from the Eritrean army may serve as a basis for refugee status, Israel’s deputy attorney general instructed Israel’s Population and Immigration Authority on March 22 to reexamine the cases of Eritreans currently head in Saharonim Prison whose asylum applications were denied. Another recent ruling raised the prospect that a large number of Sudanese asylum seekers, who fled genocide in the Nuba region, could also have their claims reexamined.