By Yael Marom and Maayan Dak 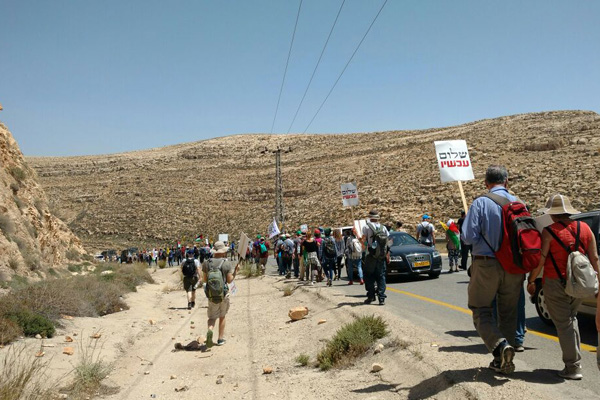 Israeli anti-occupation activists march toward a settlement in the Jordan Valley area of the West Bank to protest settler violence, April 28, 2017. (Orly Noy)

Around 200 anti-occupation activists on Friday marched on a West Bank outpost from which settlers attacked solidarity activists, Palestinians, and even Israeli soldiers in recent weeks. The protest was meant as a response to the ongoing settler violence in the area, primarily targeting Palestinian shepherds and residents form al-Auja village.

The activists had planned to conduct a protest march through the Kochav Hashachar settlement and then to its satellite outpost, Givat Habaladim. It was from Givat Habaladim that over 15 masked settlers descended and assaulted members of Jewish-Arab solidarity group Ta’ayush, who were accompanying Palestinian shepherds last week, with stones and clubs.

Police did not allow the buses transporting the marchers to approach the settlement, presenting a military order signed by the regional commander authorizing officers to decide who can and cannot pass through the area. The bus of anti-occupation activists was not allowed to continue driving; settler vehicles were allowed. 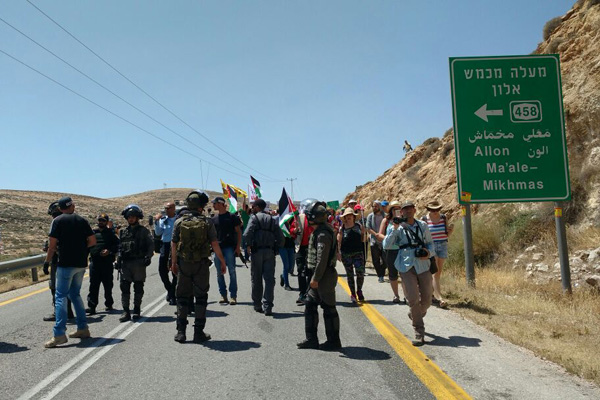 Israeli troops attempt to block anti-occupation activists from marching down a West Bank road toward a settlement in a protest against settler violence, April 28, 2017. (Orly Noy)

Following attempts by organizers and a number of Meretz members of Knesset who participated in the march to negotiate with the police and army to allow the buses to continue on, the activists started marching down the road by foot, chanting demands to dismantle the settlements and outposts.

Among the speakers at the protest march were: Abdullah Abu Rahme, an organizer of the nonviolent protests in Bil’in; Meretz chairwoman MK Zehava Galon; Rabbi Arik Ascherman; and a representative of the Palestinian residents of al-Auja village, who described the settler violence the village has been forced to live with.

“We have been living here 30 years with our flock, and we never had any problems all those years. But since 2008 we’ve had problems with the settlers from the outposts who try and stop us from grazing our flock,” the representative of al-Auja said through a translator. “Sometimes they attack us, sometimes they threaten us,” he continued, adding that police have turned a cold shoulder to their complaints that settlers also often steal their sheep.

Rabbi Ascherman described how he was attacked a week earlier by settlers in the same area: “Eighteen guys chased us for a kilometer-and-a-half out of hatred, because they have been blinded by the holiness of the land. They don’t understand that it is the Palestinian shepherd who was made in G-d’s image and not the land, however much the land is important to us.”

Hundreds of Israeli anti-occupation activists showing up in the Jordan Valley is not a common occurrence, Ascherman continued, calling on the activists to return and join groups like Ta’ayush to accompany Palestinian settlers to protect them from settler attack.

A number of settlers showed up toward the end of the march, waving Israeli flags and chanting “death to Arabs.” When the anti-occupation activists finally left, their buses were given police escorts. A smaller group of Ta’ayush activists stayed behind to accompany shepherds from al-Auja to their grazing land, but soldiers declared the area a closed military zone and prevented several of them from continuing on.