Dozens of Palestinian families in the Jordan Valley were displaced last week by huge military drills conducted by the Israeli army. The disruption, and damage left behind, are representative of the wider problems of dispossession and control experienced by Palestinians living in this part of the West Bank. 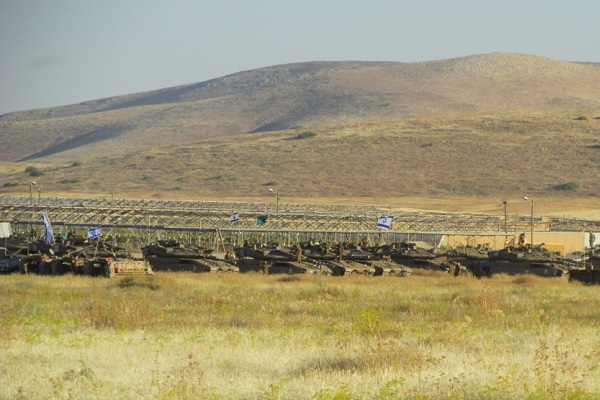 Israeli army tanks in the northern part of the Jordan Valley during extensive military drills in the area, May 4th, 2015. (Jordan Valley Solidarity)

Hundreds of Palestinians in the Jordan Valley were last week displaced by “unprecedented” training exercises conducted by the Israeli army. The drills, which according to witnesses involved over 100 military vehicles, including helicopters, officially started on May 3; however, communities in the northern Jordan Valley had noticed an increase in the military presence in the area throughout the previous week.

The exercises were conducted by the Artillery Corps Support Unit 282, according to the Jerusalem Post, as part of preparations for a possible war with Hezbollah.

Local groups, such as Jordan Valley Solidarity (JVS), have been actively monitoring and recording the impact of the training exercises. JVS, a grassroots coalition of Palestinian community groups, notes that 47 families from the Hamra area were approached by the Israeli army on April 30 and forced to sign orders compelling them to leave their homes between May 4-7, in order for military drills involving live fire to be conducted.

Military training exercises also began in the Aqraba area of the Jordan Valley on May 3. JVS reported that none of the affected families had received prior warning of the drills, but rather noticed a military camp being set up near their homes.

These drills followed an earlier set of exercises in the same area of the Jordan Valley, carried out on April 28. Those exercises resulted in the destruction of 3,000-4,000 dunams of crops and trees, after ammunition shot by the Israeli army started fires on the land that Palestinian firefighters were prevented from reaching.

The displacement, firing of live ammunition, explosions and road closures that continued throughout last week in the army’s ‘training zone’ have gone largely unreported by the Israeli and international press. A volunteer with JVS, Maisie, confirms that appeals to the EU and the UN that the group launched last week have gone unanswered. While the heaviest part of the drills now seems to have died down, as during previous episodes the Israeli army has left behind scorched ground. Additionally, Maisie explains, their tanks and Jeeps have destroyed many roads leading to Palestinian communities in the area. 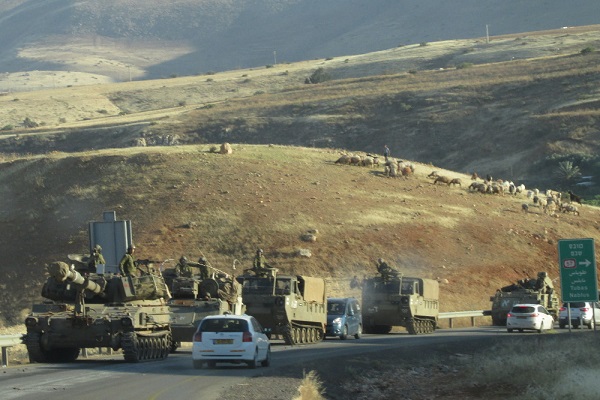 Israeli army tanks in the northern part of the Jordan Valley during extensive military drills in the area, May 4th, 2015. (Jordan Valley Solidarity)

The disruption and destruction of last week are representative of the challenges facing the Jordan Valley’s Palestinian residents. The majority of the Jordan Valley (which makes up 30 percent of the occupied territories) is designated Area C, which is under full Israeli military and administrative control and therefore technically off-limits to Palestinians. Ninety-five percent of this area is under the control of Israeli settlements and regional councils, in addition to various areas being either ‘state lands’, closed military zones (including firing areas) or nature reserves.

Prevention of access to farmlands has also had a significant impact on Palestinian agricultural trade in the Jordan Valley. In particular, an area of around 5,000 dunams – located in the same region where last week’s military exercises took place – has been off-limits to Palestinians since 1969, yet is being farmed by Israeli settlers. The matter is currently in front of the High Court, following a petition by Palestinian families affected by the restriction.

Given the Israeli government’s overarching plans to annex the Jordan Valley, none of these issues are expected to receive any kind of a just resolution in the foreseeable future. The Israeli army’s training exercises, with all their attendant ruin, will also persist, and are likely to intensify. In May 2014, Col. Einav Shalev of the Central Command – the section of the Israeli army responsible for units in the West Bank – confirmed to a Knesset committee that such live fire military drills in Area C are aimed at driving Palestinians out. Between government policy and military activity, the ethnic cleansing of the Jordan Valley is set to continue.