Over 800 people marched in the streets of Issawiya to call for an end to the mayor’s policies of road closures, petty fines and home demolitions.

In the midst of the heightened tension gripping much of Jerusalem over the past few weeks, over 800 people marched peacefully through the village of Issawiya Wednesday, calling for an end to collective punishment of East Jerusalem residents and protesting the occupation. The majority of marchers were Palestinians from the neighborhood, along with a sizable contingent of outside activists, both Palestinian and Israeli, coming from the nearby Hebrew University campus and elsewhere to show solidarity with the people of the Issawiya. The march, organized by an ad-hoc coalition of Palestinian and Israeli activists, was intended to highlight the ways in which residents of East Jerusalem, and Issawiya in particular, have faced severe collective punishment over the past few weeks.

The demonstration yesterday began at 4:00 p.m., and was guarded by dozens of Border Police officers dressed in riot gear and armed with tear gas, rubber bullets and other crowd dispersal measures. Some of the officers were mounted on horseback, and behind them a “skunk” vehicle loomed. 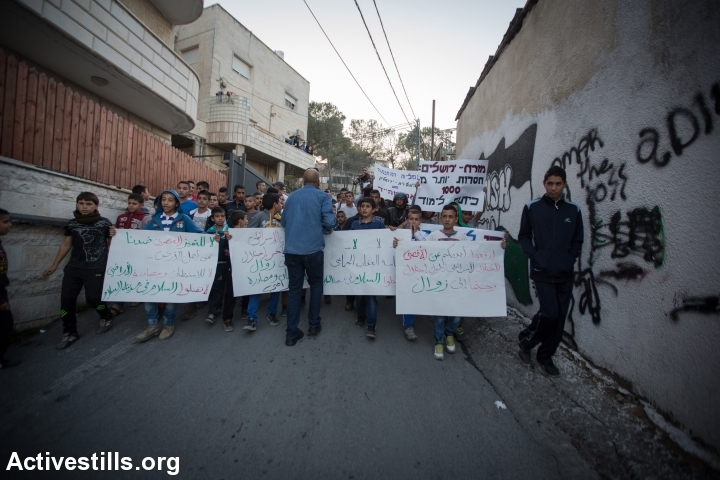 Palestinian protesters and Israeli activists demonstrate against new concrete blockades put in place by Israeli police restricting access to the East Jerusalem neighbourhood of Issawiya, November 12, 2014. Israeli police had blocked off three of the four entrances leading to Issawiya due to recent clashes between Palestinian youths and Israeli police. (Faiz Abu Rmeleh/Activestills.org)

Haithem Mahmoud, a resident of Issawiya who attended the march, explained to me that for the past two weeks, two of the three main access roads into Issawiya have been blocked off. I asked him what the explanation was for these blockades, and he said that police had informed them that the roads were blocked in order to “stop stone throwing by youth.”

“They’re treating the whole village like trash,” he continued, “It’s harder to get food, harder to get medicine. Students are late for school every day. If someone is sick, and wants to get to the doctor, it might take him an hour to get to get to Hadassah [a nearby Hosptial; Google maps reports the drive should take 6 minutes; apparently Google hasn’t updated its services to account for the conditions on the ground under Israeli occupation – MRZ].”

Haithem Mahmoud’s explanation aligns directly with an explicit statement made by Jerusalem Mayor Nir Barkat on October 29th, in which he ordered municipal department heads to punish East Jerusalem residents by closing off roads, handing out tickets for the smallest traffic violation, and demolishing homes. According to Barkat, the goal of this policy is to “compel the Palestinian public to act against Palestinian youth who have been clashing virtually daily with police in East Jerusalem neighborhoods.” As Rabbi Barry Leff put it in the Jerusalem Post: ‘’In other words, collective punishment.’’ 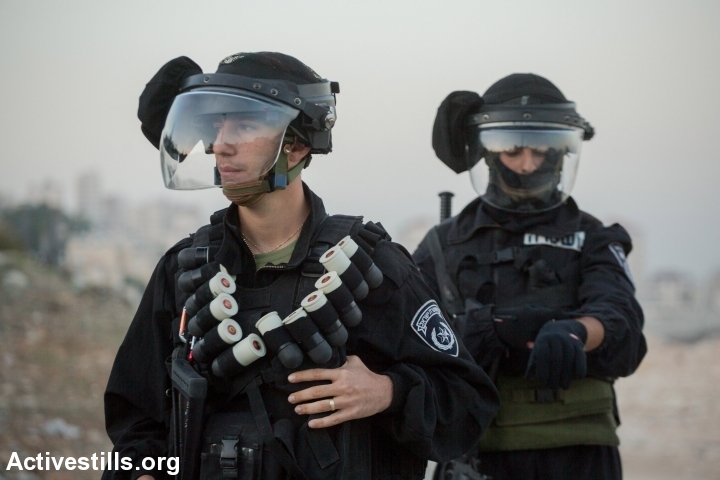 In addition to road closures, traffic fines and demolitions, residents of Issawiya reported that Israeli forces have been firing of tear-gas and nauseating “skunk” water directly into homes, injuring innocent civilians and creating a climate of general misery in the village. A letter sent by the Association for Civili Rights in Israel (ACRI) to the Israeli police included reports of stun grenades being “flung into residential buildings containing families with young children,” and police usage of a new type of “sponge bullet” that can cause “serious bodily damage.” The letter further asserts that these bullets may have been used in the incident in which 16 year-old Mohammad Sunuqrut was shot and killed during an East Jerusalem demonstration on September 9th.

It must be noted that there were no violent clashes during Wednesday’s protest, perhaps due to the presence of Israeli activists. As Border Police officer Yasmin Levy explained in Just Vision’s 2009 film, Budrus: “At times, left-wing Israelis joined the Palestinians. And because they were Jews, we couldn’t use force against them.’’ 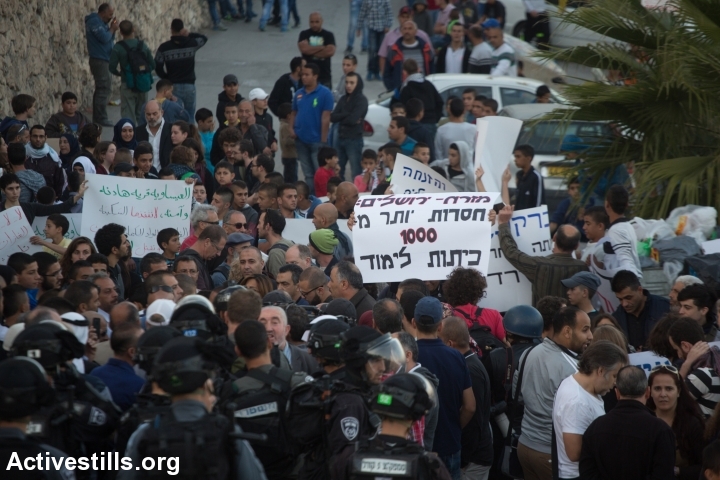 The crowds had dispersed by 6:00 p.m.. Meanwhile, the policy of collective punishment remains intact in East Jerusalem neighborhoods like Issawiya, and reports from the village this morning are that the situation in Issawiya is only getting worse.

Moriel Rothman-Zecher is a writer and activist, based in Tel Aviv. Follow him on Twitter for updates, pictures and more at @Moriel_RZ. He blogs independently at www.thelefternwall.com.

Related:
The hard fact is that Israeli repression works
What Palestinian media is saying about the Jerusalem violence
No one left for Bibi to blame – except, of course, Abbas