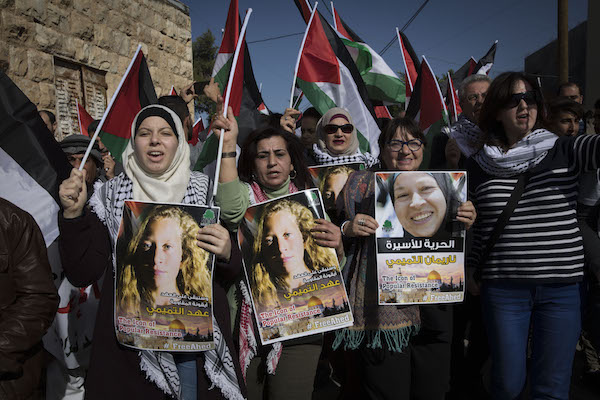 Roughly 300 people — Palestinians, Israelis, and internationals — marched in the West Bank village on Nabi Saleh on Saturday to demand that Israel free the Tamimi family women, 16-year-old Ahed and her mother, Nariman, as well as other members of the popular resistance committees who have been arrested over the past several weeks.

In addition to the residents of Nabi Saleh, the demonstrators included Joint List head MK Ayman Odeh; Palestinian Legislative Council member Mustafa Barghouti; Mohammad Barakeh, chairman of the High Follow-Up Committee for Arab Citizens of Israel; and Luisa Morgentini, a former member of the European Parliament. Activists from the popular resistance committees of Al-Masara, Bil’in, Ni’lin, Kadum, Hebron, and other cities and towns across the West Bank also joined the protest, as did members of Anarchists Against the Wall, Combatants for Peace, and Ta’ayush.

Israeli forces blocked the main entrance to village early in the morning, but activists managed to arrive in Nabi Saleh via other routes. The demonstrators gathered in the center of the village and began to march, at first led by a line of women to represent the strong female leadership of the popular struggle in the village.  They were joined by Naila Ayesh, a leader during the First Intifada, whose story is featured in the film “Naila and the Uprising,” recently released by Just Vision (and for which I had the honor of helping do research). Ayesh’s presence linked the previous generation of female Palestinian leadership with the new, young female leadership of the current popular struggle. As the march continued, however, a group of men eventually passed the front line of women—perhaps no less symbolic. On a hill overlooking the village’s spring, the demonstrators gathered to hear speeches from various prominent figures in attendance. The popular struggle in Nabi Saleh began when settlers from the adjacent settlement of Halamish seized the spring and prevented the village’s residents from reaching it.

As the speeches went on, a number of Palestinian youths engaged in small skirmishes with the soldiers guarding the spring. The soldiers fired tear gas at the youths, and at the rally, which was a considerable distance away. Following the barrage of tear gas, the demonstrators retreated into the village, where they regrouped. The demonstrators then marched toward the army blockade on the village’s main road. Soldiers met the demonstrators, again, with a massive barrage of tear gas grenades, as well as with the “skunk,” a putrid-smelling phosphorescent liquid the army uses to disperse crowds. Several Palestinian teenagers threw rocks and kicked tear gas canisters back in the direction of the army. After an hour or so of skirmishes in the area around the main road, the protest ended.

“I came to Nabi Saleh today to join the residents in their call for the release of Ahed and Nariman Tamimi, the heroines who have struggled against the cruel occupation with their bare hands,” MK Ayman Odeh said. “I was happy to see a large group of Jewish Israelis here, who recognize that a nation that oppresses another nation cannot be free, and that the struggle to end the occupation is the highest shared interest of both nations.” 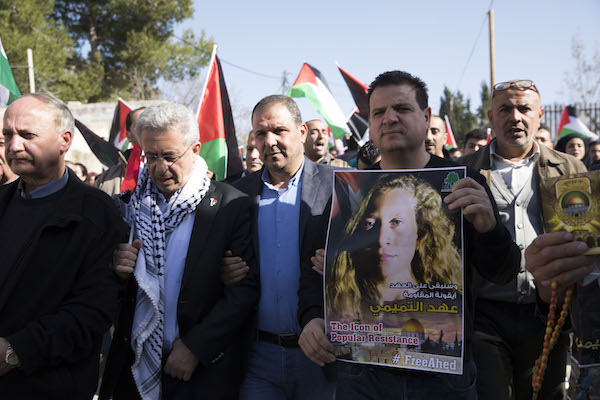 The residents of Nabi Saleh have long protested against the occupation, against the settlements, and against the seizure of their spring. The village held regular protests for several years, until early 2017. Following U.S. President Donald Trump’s Jerusalem declaration, the residents of Nabi Saleh resumed their protests. During one such protest last month, Israeli soldiers shot 15-year-old Mohammed Tamimi in the head with a rubber-coated bullet, badly injuring him.

Shortly after Mohammed was shot, his cousin, Ahed Tamimi, was filmed attempting to push soldiers off the porch of her family’s house. The video quickly went viral in Israel and around the world. Several days later, the army arrested Ahed. Ahed Tamimi has been in Israeli military prison for nearly a month, along with her mother, who was arrested one day later. Ahed faces 12 different charges, including assault of a soldier, disrupting the work of a soldier, and incitement. Her mother Nariman faces has been charged with incitement for live-streaming Ahed’s interaction with the two Israeli soldiers.

Since her arrest, Ahed has become an international symbol of the Palestinian struggle against the Israeli military regime, the settlements, and the detention of Palestinian children and members of the popular resistance committees.