The rally comes after three members of the group were arrested as suspects in the arson attack against a mixed Jewish-Arab school. Hundreds of people protested in West Jerusalem’s Zion Square Saturday night against racism and called to outlaw Lehava, a racist, anti-misegenation group . Three of its members were charged several days ago with an arson attack against a mixed Jewish-Arab school two weeks ago.

The protest was organized by a group of activists who identify as: “Jerusalem doesn’t stay silent in the face of racism.” Protesters held signs in Hebrew and Arabic that read “Stop the racism” and “Jews and Arabs refuse to be enemies.” They called out chants like “Lehava’s racism begins in the government” and “Jerusalem will not be silent; outlaw racism.” 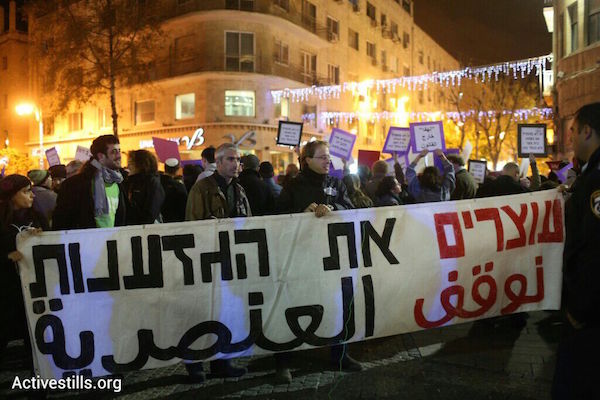 Among the speakers at the protest was Murad Mana, whose child attends the bilingual Arab-Jewish school in the city which was burned exactly two weeks ago. He said, “We will not allow any bully to burn down our coexistence.”

+972 blogger Orly Noy, whose children also attend the bilingual school, also spoke at the rally. “This type of violence does not take place in a vacuum,” Noy told the crowd and wrote in a post later Saturday night (Hebrew). “It sprouts from a bed of growing deligitimization of the Palestinian population in Jerusalem, both inside Israel and in the occupied territories.” 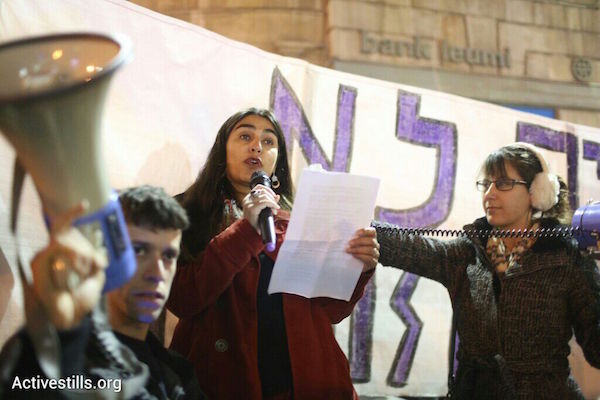 Three Israelis arrested for the arson attack on the mixed Arab-Jewish school in Jerusalem two weeks ago are active members of Lehava, Israel’s Channel 2 reported Thursday, after a Shin Bet gag order was lifted on the case.

One of the suspects is from Jerusalem and the other two are brothers from the West Bank settlement Beitar Illit. The three reportedly admitted in their interrogation by the Shin Bet that they carried out the attack because they object to Arab-Jewish coexistence and that they hoped their act of arson would “raise public awareness” against the phenomenon. In addition to the burning of a first grade classroom and its books, graffiti found on the school included: “death to Arabs,” “coexistence is a cancer,” “no to assimilation” and “Kahane was right.”

All these messages are explicitly identified with Lehava, whose leader, Benzi Gupstein, is a disciple of the late Meir Kahane. Kahane’s Kach party was disqualified from participating in Israeli elections in 1988 for inciting to racism, and was banned outright in 1994. Kach is considered a terrorist organization by the United States.

Since the summer, groups of Lehava activists have become a regular staple in downtown Jerusalem, where they go around making racist remarks against Palestinian pedestrians and taxi drivers, sometimes physically attacking them. And although the group claims to be strictly committed to advocating against Jewish assimilation and intermarriage in Israel, its activities are rife with incitement to violence and racism. Just last month they urged Israeli soldiers to shoot Palestinians in the head.

This is not the first time Lehava has been directly tied to acts of violence. In September, two Palestinians from East Jerusalem, Amir Shwiki and Samer Mahfouz, were beaten badly by a group of Jewish Israelis, several of them identified as activists with Lehava.