By freezing Muhammed Allan’s administrative detention, Israel proves that the only way for Palestinians to successfully challenge its unlawful detention policy is to starve themselves to brain damage. 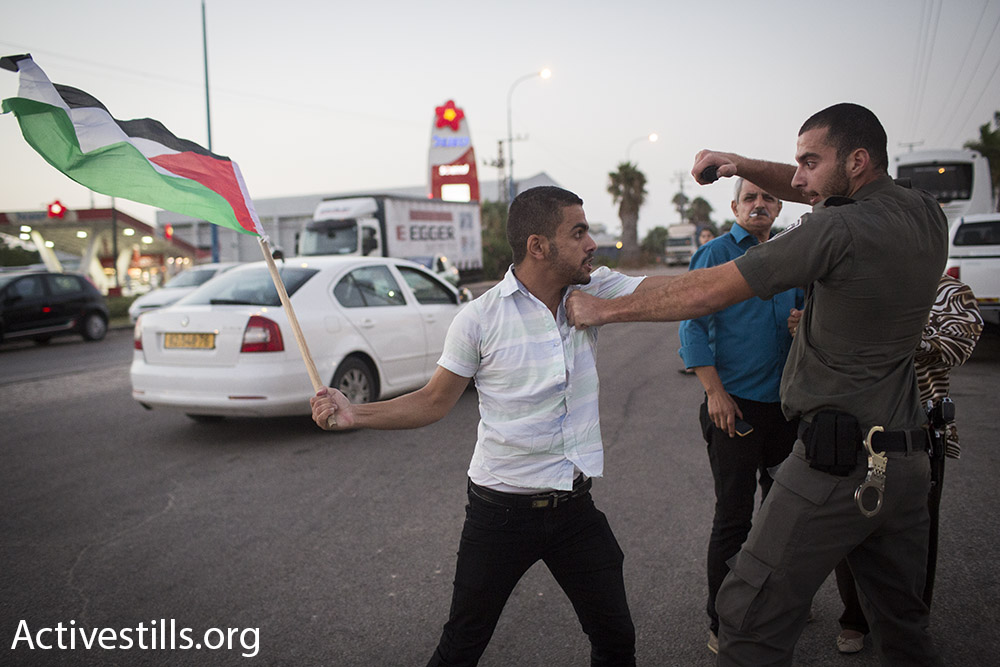 Israeli police bar a Palestinian protester at a demonstration for the release of hunger striker Mohammad Allan, outside of Barzilai hospital in Ashkelon, Israel, August 16, 2015. (Oren Ziv/Activestills.org)

To put it more bluntly, as long as you are essentially a vegetable, you’re free to go. However, if we see that your situation improves, you will remain incarcerated. In his judgment, Justice Rubinstein actually wrote: “[Allan] does not pose a danger because of his medical condition, so the administrative order is not active now.”

The decision is appalling from a humanitarian perspective, with the state watching on as Allan’s condition rapidly deteriorated since he fell into a coma last Friday; his body both figuratively and literally being employed as a bargaining chip in the debate over Israeli administrative detention.

The decision also demonstrates the power of hunger strike as a form of nonviolent resistance to imprisonment without charge. Israel is incapable of ignoring or circumventing this tool. By letting Allan get to this point, it has made clear that the only way to successfully challenge its draconian policy of administrative detention is to starve yourself into brain damage — essentially, to kill yourself.

The story of Muhammad Allan is so powerful because it embodies the  story of Palestinian resistance to Israeli occupation. Israel has historically made concessions as a response to Palestinian force; many point to the First and Second Intifadas as the reasons why Israel ultimately withdrew from parts of the territories it occupied.

The only way to challenge Israel’s monopoly on the legitimate use of physical force, of violence, is to upend it with one’s own body through a physical, forceful act. This is why a Palestinian prisoner on hunger strike is the ultimate symbol of resistance, and one of the most effective ways to expose and dispute Israeli mechanisms of control.