In order to avoid theocracy, apartheid and civil war, one Israeli believes it is time for her fellow Jewish citizens to start re-imagining their identity.

Fine, I am not yet a Palestinian Jew, but in 10 to 15 years – and certainly in my lifetime – this place will be called Palestine, and I will be a citizen of Jewish-Israeli heritage. By saying I am a Palestinian Jew I am being neither flippant nor provocative, as my critics would likely hasten to argue. Instead, I am analyzing the current reality and describing the future – utopian, or apocalyptic – depending on the viewer’s position.

The truth is that it is quite odd for me to describe myself as a Palestinian Jew, since I am an Ashkenazi Israeli, and thus have no Arab-Jewish lineage. On my father’s side, I am a sixth generation Jerusalemite, but my forefathers and foremothers spoke Yiddish and prayed in the Hungarian-Jewish tradition. They were citizens of the Ottoman Empire, and then citizens of the British Mandate of Palestine, but they did not consider themselves Palestinian. In fact, my great-grandfather was a staunch Zionist and a member of the first Knesset, despite his ultra-Orthodox background. My father was an atheist since childhood, my mother was raised secular, and I grew up as a secular, liberal Zionist Israeli. Being secular and Israeli are still the most prominent markers of my identity, despite my immigrating to Canada. 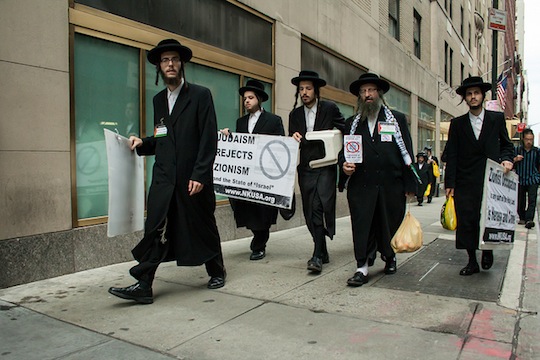 I try to say it out loud: I am a Palestinian Jew. But it doesn’t easily roll off my tongue. I am not ready to say it to anyone else – I don’t even know what it means. But in all likelihood, I will become one sooner or later, so I better practice.

I do not know whether partitioning the land into Israeli and Palestinian states would have worked in 1947, or even as a result of the Oslo Accords. What I do know is that Israel has long made that reality impossible. In the West Bank, Israel controls nearly three million Palestinians, dispersed among towns and villages, without an independent economic infrastructure or any possibility of contiguity or growth due to the settlements and other forms of direct or indirect control. In Gaza, Israel dismantled the settlements, yet it retains control over the lives of more than 1.5 million Palestinians through an aerial, land and naval blockade (coordinated with Egypt). Curiously, Israel still issues birth and death certificates in Gaza, leaving Palestinians with little autonomy as a political entity.

Inside Israel 1.5 million Palestinians live as second-class citizens. Take Beit Safafa for example: once a Palestinian village, and now a Jerusalem neighborhood with a population of thousands. Beit Safafa has no urban development plan, contains hardly any street names, sidewalks or buses, and is mostly absent from Israeli maps (as opposed to Jerusalem’s other neighborhoods). Currently, the Israeli government is working to divide Beit Safafa into four isolated sections, by building Route 4 to allow settlers to easily travel to Jerusalem.

Read: The two state vs. one state debate is a waste of time

Segregation based on religion, ethnicity, or nationality were done away with through Israel’s Declaration of Independence, issued in 1948. But the same document declared Israel the homeland of the Jews, and as such, set the stage for an ethnocentric country. In practice, the promise of equal citizenship remained on paper, while state institutions and their satellites – such as the Jewish National Fund, or the Jewish Agency – worked diligently to Judaize the country. Altogether, close to six million Palestinians live under Israeli control (including citizens, residents and occupied Palestinians).

Israel’s Jewish population is slightly over six million, meaning that in just a short few years, a newborn Palestinian will have the honor of tipping the balance in favor of a Palestinian majority. As Israeli Jews, we will have to choose whether we want to be part of a democracy or of a Jewish state. If we choose a democracy, a bi-national state for all its citizens will be established peacefully. If we opt to be a Jewish, non-democratic state, the term “apartheid” will apply in its broadest definition. Israel will be shunned economically and culturally, and eventually yield to international (and perhaps also internal) pressure in order to end apartheid. If democracy is established in this post-apartheid state, it will have a Palestinian majority and will likely be called Palestine. In this future Palestine, I will be part of a national minority.

What would the transition from being an Israeli to a Palestinian citizen entail for me and for other Israeli Jews? Around the world, being Jewish encompasses both ethnicity and religion, but the situation in Israel is different. In Israel, Jewish ethnicity functions only internally – that is, as a marker between Ashkenazi, Mizrahi and Russian Jews, for example. Secular Israelis experience their Jewishness primarily through their connection to a tradition grounded in a specific geographical space. For instance, celebrating the Jewish holiday Tu Bishvat (Israel’s ecological awareness day) in Canada during the winter makes no sense to my daughter. In Israel, however where the almond trees bloom, it is simply natural to mark the rejuvenation of nature. The life cycle and daily rhythms of secular Israelis are governed by Jewish traditions, but do not include the observing of all, or any, of the religious laws. Orthodox Jews, by contrast, practice their religion as a daily manifestation of their Jewishness. Assuming that future Palestine does not become a theocracy, there is every reason to believe that both secular and Orthodox Jews will be able practice their Judaism in much the same way we do today.

The contemporary national identity of Israelis (especially those born in Israel) has developed as a result of the modernization of the Hebrew language and original (and hybrid) cultural forms, as well as a healthy mix of high and pop culture; world influences; homegrown forms; and a very active intellectual community. Hebrew and Arabic are currently both the official languages of Israel. I believe it is likely that we will establish a cultural confederation – one in which citizens can choose their education and religious services – just as we do today, and it will be uni-national, religious or integrated. 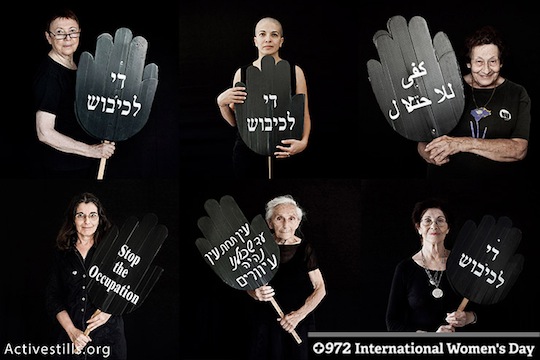 Women in Black. (photo by Activestills.org)

The achilles heel for most of us will be the place of Zionism in our identity. Zionism, as a national movement geared toward creating a homeland for the Jewish people, is by definition ethnocentric, and thus exclusionary of non-Jews. In the political climate of Europe in the late 19th century, the logic and necessity of focusing on establishing a state where Ashkenazi Jews could live freely was abundantly clear. Indeed, if it weren’t for Zionism, I wouldn’t be alive at all, as my maternal family would likely have perished in the Holocaust. But as soon as Israel was established and stabilized itself, Zionism achieved its goal and should have been dismantled in favor of a “state of all its citizens.” Instead, Zionism was entrenched in the Israeli education system, as well as in state institutions. An ethnocentric education system in a multi-ethnic state could only lead to racism toward other ethnic, national and religious minorities. Perhaps it wasn’t the original goal, but today, as long as we keep Zionism as a core value of the Israeli system, we are actively practicing racism.

But since Zionism achieved its goals, perhaps it is time to let it go and experience it as part of our collective history, rather than part of our contemporary life. I am not sure much, if anything, will be lost of Israeli identity. But I do know what will be gained: we will live in a humanist, egalitarian and truly democratic society. If the new state is based on a just economic system, personal security will naturally follow for everyone.

Something to look forward to

I draw hope – perhaps naively – from the bloody history of Canada, where the French and the British fought each other for several hundred years, until Canada’s indigenous people convinced both parties that neither one can defeat the other. The compromise between the two sides relegates national sentiments to the cultural and education sphere, while citizenship is construed based on civic rights, rather than ethnic, national, or religious belonging. I do not know who could mediate between Israelis and Palestinians (and it is important to note that Canada’s indigenous populations is still systematically disenfranchised), but I look forward to the opportunity of living equally in a country full of diversity.

Zionism has shaped me throughout my childhood and adolescence. But in my academic, creative, and activism, I have come up, time and again, against its severe blindness and ethical flaws. In the past few years, I stopped describing myself as a Zionist, and found that my Israeli identity had only been strengthened. I teach at a Canadian university, but my research and work is all based in Jerusalem.

While on sabbatical, I live in the Katamon neighborhood in Jerusalem, where I am excavating the buried histories of the area. As I walk in “flower garden of Jerusalem” (the neighborhood’s Arabic nickname), I imagine the Iraqi, Lebanese and Egyptian embassies populated once again. I imagine myself walking down from Duar Abdin, today Reha Friar Square, to the Philosopher’s Square, without losing my identity. I think it is possible. I hope it is. The other options are theocracy, apartheid and civil war. So in the meantime I am practicing: I am a Jewish-Israeli and a Palestinian citizen. One day it won’t sound weird at all.

Related:
Why it’s time to discuss the one-state solution
One or two states? The status quo is Israel’s rational choice