A Lebanese band’s concert in Jordan offered  this Arab Jew from Haifa a new take on her identity and one of the of the key premises of the Arab-Jewish conflict. 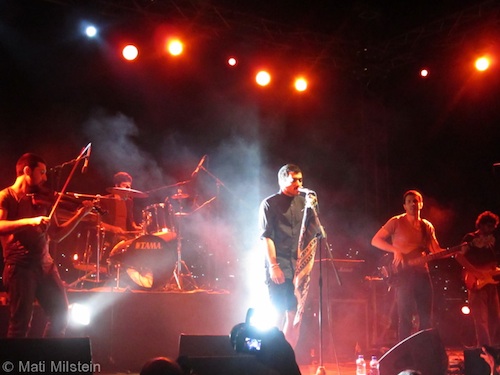 Last Tuesday, I returned from Amman. I went to see a concert given by the Lebanese band Mashrou3 Leila in the only Middle Eastern Arab country still open for Israeli Jews to freely visit. The best way to get from Israel to Amman is by bus from Nazareth. The passengers were mostly elderly Arabs going to travel in Jordan and the rest were a bunch of fellow concertgoers.

My journey to Amman and back was critical to the evolving process I am currently undergoing relating to my personal, ethnic and political identity. The identity of the Arab Jew, while rendered a near impossibility in today’s Israeli socio-political reality, is nevertheless essential to who I am and how I see my world.

Symbolically (or not), my book for the road was Tel Aviv University sociologist Yehouda Shenhav’s: “The Arab Jews: A Postcolonial Reading of Nationalism, Religion, and Ethnicity.”

I first heard the term “Arab Jews” in my freshman year of university. A friend of mine told me a certain professor used it to describe Mizrahi Jews (Israelis whose origins are in Arab and Muslim countries), and I remember I was deeply offended. I remember thinking that the use of the term “Arab Jews” was racist and exclusive. I felt that the word “Arab” was used as a collective insult against Jews of “Oriental origin” such as myself.

A long time has since passed, during the course of which I have dedicated much effort to dealing with my own racism towards Arabs. This was also a period of time during which I realized that the word “Arab” is not an insult and does not symbolize, as I had learned from Israeli societal norms, a barbaric and culture-less mass.

During that time, with the help of initiatives like Ruch Jedida, and bands like Mashrou3 Leila, I realized that the language that was spoken in the homes of my grandparents (who are of both Moroccan and Iraqi origin) was Arabic. The music they played was Arab music, and the food I ate as a child in their homes was Arab food. (Obviously, there are many types of Arab Jewish foods, and there are excellent articles discussing the great culinary variations within Mizrahi culture. But for the purposes of this post, I maintain that there is greater similarity between various Arab Jewish dishes than there is between Mizrahi cuisine and traditional Ashkenazi cuisine.)

My discovery of  Arab culture was, in fact, a movement in two directions. With every new box I opened in my studies, an old box that rested inside of me was revealed. Unveiling the “other” – the Arab – allowed me to discover the parts of my identity from which I had up until then been alienated. Later, this process allowed me to embrace the Arab Jew with a renewed pride.

Though I have previously traveled in Morocco, this trip to Amman represented an apex in my process of personal evolution: this was the first time I visited an Arab country with a conscious awareness – even if still in its initial stages – of the “Arabness” in me.

On the bus to Amman, the other passengers spoke to me in Arabic – a language that I do not understand. Shenhav says that the only way for Arab Jews to earn their “ticket” into Israeli society is via denying all that is Arab inside them.

Trapped inside the false dichotomy of Jewish-versus-Arab that was created artificially by  Israel, the Mizrahi Jews had to suppress their Arab characteristics and stress their Jewish characteristics. (Which makes it hardly surprising that major parts of the Mizrahi community in Israel are today both religious and politically right wing).

Getting too close to Arab culture or too far from Judaism symbolizes for the Arab Jews the blurring of the boundaries between “us” and “them” – “them” being the Arab “enemy” – which is the dominant narrative authored and imposed by the Zionist movement.

Back to the bus. An elderly Arab woman told jokes in Arabic that I did not understand to the other Arab women around her. At some point she took out some sefihe – an Arab bread topped with meat – and offered it to us. When we first politely refused she said in Hebrew, “You can eat it. It’s kosher. I’m religious.” She was a Syrian Jew that came to Israel years ago. Unlike me, however, she had not turned her back on her Arab origins, but rather preserved them in a way that made it difficult for me, and for others in the bus, to fit her into any preconceived category or stereotype.

And it was in this unsettling moment of confusion that I suddenly understood myself clearer than ever. One of the major assumptions in the heart of the primary existing paradigm of the Arab-Israeli conflict is that there are two different populations in conflict – “us” and “them” – and that each has distinctive, opposing interests. I believe that the re-connection of Mizrahi Jews to our Arab origins has a huge potential to alter the paradigm of the conflict.

One of the key and best-founded arguments against the two-state solution – the most accepted mainstream liberal interpretation of that separation – is that it neglects to consider the ’48 Palestinians (those who remained in what is now the State of Israel following the 1948 Middle East war), and leaves them in a Jewish state with no representation of their heritage, history, language and culture. What I understand today is that the division of land into two separate Palestinian Arab and Jewish, non-Arab countries also ignores my interests, heritage and culture as an Arab Jew, and would impose on me once again this artificial dichotomy of Arab vs. Jew.

“Free Palestine!” called the lead singer of Mashrou3 Leila from the stage in the middle of the concert, and all of us – Palestinians from Ramallah, Palestinian-Israelis from Jaffa, I, an Arab Jew from Haifa and Ashkenazi Jews from Tel Aviv, cheered. I felt that there was no “us’ and ‘them’ at that moment, partly because there were too many possible ‘us’s and ‘them’s into which we could be divided.

For me, just then, a new entity was created, one that does not perceive Arabs and Arabness in contrast or opposition to anything, but that rather sees “Arab” as an integral, essential and totally natural component of our own identity.

Lihi Yona is an Israeli feminist activist and blogger. Her Hebrew blog is Reuma.