In these frenzied days, I look for routine and find it in the task of translating names. Not that anyone reads all of them, but here’s another child, and another, and a last name that gets repeated again and again. And then I realize that a whole family has been wiped out.

For several days now I’ve been translating the names of those killed in Gaza to Hebrew. It was not my idea, and I’m not an expert in literary Arabic, but I volunteered my meager translation skills to help John Brown, because it seemed the right thing for me to do, for some odd reason. Every day my capabilities seem to grow, and I freely scan though Palestinian news sites and the website of the Ministry of Health in Gaza, plucking out more and more names of the dead.

But I’m oblivious to it. Like a robot, I sit and translate more and more names of the deceased and I do not comprehend at all what this list really is. Every so often it hits me, when suddenly in the middle of the list, I encounter a series of names that are too similar, with too big an age range and from the same locality, and it dawns on me that these are the names of members of a family that was wiped out in a single moment. I press on with the list, which expands by the minute, unmindful of its various meanings. But then comes a familiar last name, and I realize I may know people in the Negev/Naqab from this family, and I come back to reality. The names that share first names with close friends of mine also make me sad, because I remember that ultimately these are human beings. 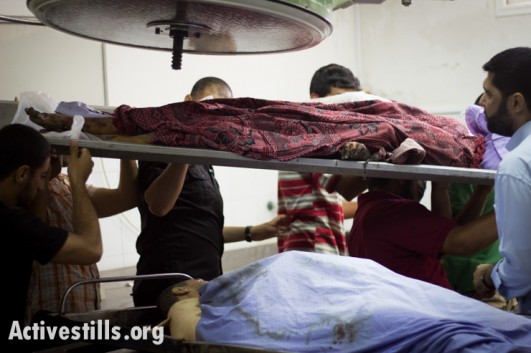 There’s something very anodyne about this list: name, place of residence, age. Some people have their details missing, some are updated in the days following. I’m not sufficiently versed in these matters to know who was a senior Hamas commander, who fired rockets and who is just trying to live their life – a life that was taken in a minute. All the names are listed one after the other, without notes about the deceased’s degree of involvement in the situation. When I start to think about it, some things become clearer. Dozens of children, aged one-and-a-half, three and 11, and even 16, along with older women aged 73 and 80, are all victims of this intolerable situation.

In my quest for routine these days, I seem to find it in updating this list. I don’t think anyone really sits down and reads the list name after name, thinking who s/he was and what s/he did just before it was all over. But out of desperation I want to believe that there are people for whom this awful list of names will have some impact, turn their stomachs, make them want to stop everything and choose a different path.

The list is updated every few hours, and for every person involved in the fighting there are several other names of victims who have no connection to the fighting. Dozens of names are added every day. Regardless of your stance on Gaza, open the list and try to read out loud one name after another. You can choose to read just the kids’ names. Then please try tell me that this killing must not stop.

Related:
Nobody should be a number: Names of those killed in Gaza
‘We stay together or we leave this world together’
What Israel’s ‘precision bombing’ of Gaza looks like