The kidnapping of three Israeli teens started a chain of events that has affected people of all stripes, Jewish and Palestinian, and in different places. A reflective diary of the kidnappings, as they touch others. 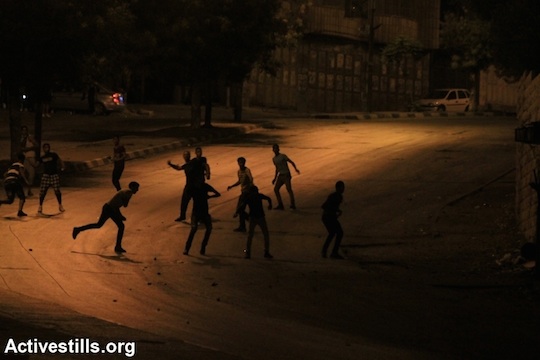 “I’m parked in front of the market.”

I have no idea what Manal is talking about.

“No, I live in Kufr Aqab. I am parked in front of the market.”

Alright then. Manal is waiting for me in front of some market somewhere. I hazard a guess that it is indeed on the way to Kufr Aqab, and start walking in the direction of Ramallah from Qalandia checkpoint. We stay on the phone as I describe my surroundings.

“Now I’m passing a café. There are only men inside. There is a gas station on the other side of the road. It looks closed. Wait, no, it’s open.”

Soon enough, I run into a parked car with a woman on her cell phone, smiling in my direction.

“Ahlan! So sorry I was confused!”

“Not to worry, not to worry. Today, you are my guest.”

I shake Manal’s hand and hop into her car, chuckling a bit to myself. I thought I was coming for work. Now I am certain that I will be invited to dinner. What did I expect?

Manal was a young woman, about my age, at the time of the Second Intifada. As she speaks, I am shocked to hear her memory of the ordeal. It feels so familiar.

“When the jets would fly over Ramallah, the sound was awful. And then we would know, when the jet stopped in the sky, that it was going to release a bomb. We would all run and take cover, stay away from the windows.”

“Did you have shelters?”

“You know, in Hebrew it’s called a miklat, a protected safe-room, usually under ground. It protects you from bombs.”

“No, no. Actually, my uncle had something like that built into his home. But no, we have no shelters here.”

I was silent for a moment, reflecting on how the Second Intifada had shaped the psyche of my generation. Israelis my age still speak of instinctive fear when they step onto a bus. I see the collective jolt every time someone screams or cries from a seat in the back. I see the constant vigilance over lost shopping bags and abandoned pieces of garbage: suspicious objects.

“If there is a third intifada, I will take my children away. Maybe to Dubai, or Canada. But I do not want them to see what I have seen. I will protect my children. I am still afraid of the sound of airplanes.”

An endless array of fashion sketches are spread out before me. Penciled super models wearing spiky high heels and backless dresses, some with horn-rimmed glasses, some with leather handbags. Farah peppers me with commentary about her drawings, explaining how different fabrics are handled in the textile factory and what it takes to be a fashion designer. Her own clothes are all handmade, including a pair of wild patterned flowing pants that definitely belong on a runway.

I muse aloud that I seriously have no sense of fashion. Farah shuffles through her drawings, seizing on one woman dressed simply in jeans and a t-shirt with a scarf.

“This one looks like you. She dresses simply, but sometimes less is more.”

I look at Farah and want to cry a little bit. I remember my first trip to Israel as a thirteen year old girl. That was the summer I met my Israeli cousins for the first time. It was shocking to see my family living in a parallel universe over here, divided by the Atlantic into two totally different realities. But still, our smiles bore some genetic resemblance, some mystical connection difficult to articulate. When I met my cousin Neta for the first time, she ran up to her bedroom to collect a sketchbook of fashion designs. My mother and I had flipped through the pages, marveling at lifelike portrayals of fashion models in skinny zebra patterned jeans and colorful pink scarves.

“I want to go to fashion school when I grow up!” she had insisted. At the time she was 12 years old.

In fact, when Neta was serving in the Israeli Defense Forces, she got time off once a year to design specialty Purim costumes at a fancy boutique in Tel-Aviv. Now that she has finished her military service, she will begin a program in Gender Studies & Fashion Design at Tel-Aviv University. Her sketches are every bit as daring as they were ten years ago.

Farah snatched up the designs as her mother brought out food for dinner.

“I will go to study fashion at the Hebrew University. I do not speak Hebrew, but I will learn it.”

I looked at her skeptically.

“I might have to cross the checkpoint to go study there, but it is worth it. It is the best fashion design school in the world…Sometimes, they use the racism at the checkpoint. But I will design clothing like my uncle.”

Farah’s uncle is serving a life sentence in an Israeli prison.

Manal wishes me luck as we had back in the direction of Qalandia in her car.

“There is a lot of traffic right now, around rush hour.”

I’m a bit stressed. I hadn’t planned on staying for dinner, although I was truly grateful for the hospitality and warmth. I just had a bunch of work to get done, and it was getting late.

I notice that traffic is moving fairly smoothly, for 5:00pm.

Eyal Yifrah (19), Gilad Shaar (16) and Naftali Fraenkel (16) are kidnapped in the West Bank. They were apparently hitchhiking home from their yeshiva in Gush Etzion. A burnt out car is found at the suspected site of the kidnapping.

My boyfriend, Sam, is visiting from the States. I bring him to the Old City to meet Anwar, one of my best friends in Jerusalem. She is a Palestinian resident of East Jerusalem, and we met years ago in class at Hebrew University. We try to get together once a week for coffee.

“So, did you hear about the kidnapping?” I ask.

“You mean the three boys in the West Bank?”

“Yes, yes. I was in Bethlehem yesterday for my sister’s friend’s graduation ceremony. There were Palestinian police everywhere. Weirdly, I thought it was to direct traffic because of the graduation ceremony. But then I heard about the kidnapping. I guess that’s why they were there.”

Anwar takes us to her favorite kebab place in the Muslim Quarter. It looks like nothing special from the outside, but local Palestinian residents are crowding around waiting for a table.

“This isn’t Abu Shukri, tourists don’t know about this place. But it’s the best kebab in the Old City.”

We sit down and eat our hearts out. It really is the best kebab in the Old City. My stomach hurts until the next day.

I am sitting in Gan Sacher in the cool evening breeze. Sam is running around the track, blowing me a kiss every time he passes by. I am typing away at my laptop, trying to think out some life decisions. As I struggle to keep calm, a Palestinian family nearby gazes in my direction.

“Hey, do you want some orange soda?” says the father in Arabic-accented Hebrew.

He mutters to his younger son, “Go, give her this cup of orange soda.”

Despite my protestations, I am presented with a bubbling plastic cup of orange soda.

“We also have some hot coffee if you like!”

I sip at my orange soda until Sam is done running. Time to shower, change, and head off to Shabbat dinner with my cousins.

“Shabbat Shalom,” I call back, giggling. What’s the proper response to people who don’t observe Shabbat?

Later, after Shabbat dinner, we crowd in front of the TV and watch news coverage of the kidnapping.

I wonder how Manal and Farah are doing in Kufr Aqab.

I sit at Nachla, one of my favorite neighborhood cafes, sipping a crushed mint lemonade. The night breeze is cool and the streets are alive with World Cup fans. There is nothing amiss in the air.

Except that Eyal, Gilad, and Naftali are still not back.

Except that I have been too afraid to enter the West Bank lately.

Dozens of Palestinians have been wounded.

Almost 400 Palestinians have been arrested, many associated with Hamas. None have been charged.

At least 2,000 IDF troops have been deployed in Hebron. Approximately 600,000 Palestinians living in Hebron are under lockdown. Their homes are being raided systematically as part of the search for the teens. Their kitchens look like this: Kitchen after an Israeli army raid (Photo by Samer Nazzal)

Over 1,500 Palestinian institutions have been raided, many associated with Hamas. Notably for me, the offices of “This Week in Palestine” were also raided. That’s a fun guidebook for concerts, restaurants, and cheap hostels in the West Bank & East Jerusalem… The center of Ramallah following an IDF raid into the city. (Azzam Talahmi/CC)

A prominent defense official has stated:

The West Bank civilian population is ‘beginning to realize’ the price they’ll pay for the kidnapping…Three hundred thousand people are under curfew, and after eight years of relative prosperity they are beginning to realize [the implications]. Thousands, each of whom support six or seven family members, possess permits to work in Israel. Because of the curfew, they can’t work, and this has a visible impact on the population. With two weeks left before Ramadan, the population’s preparations for the holiday have taken a hit.

As if the civilian population committed the kidnapping.

I wonder if Farah was able to make it to school this week, with Qalandia closed multiple times. I make a mental note to Whatsapp her mom.

I wonder about Benjamin Netanyahu’s final thoughts before he drifts off to sleep tonight. The kidnapping of these innocent Israeli teenagers has been the greatest political boon to his administration all year. It seems that this kidnapping, this act of terrorism, has handily served to justify a massive incursion into the West Bank, further entrench the occupation, and arouse mass public support around racist propaganda. Does that bother him? Does he feel guilty, somewhere deep down, that this kidnapping has served him well? Nothing is “a-political” in this place.

I wonder why Palestinian lives are cheaper than Jewish Israeli lives.

I wonder about Eyal, Gilad, and Naftali. Are they breathing?

The names in this story, which was first published on Leanne Gale’s blog, have been changed. The author is an NIF fellow working with Ir Amim in Jerusalem.