I went down to the Negev to participate in this year’s Nakba Day events. The fact that it’s the 68th year and little has changed depressed me; the sense of unity and the bubbly optimism of some of the activists encouraged me. 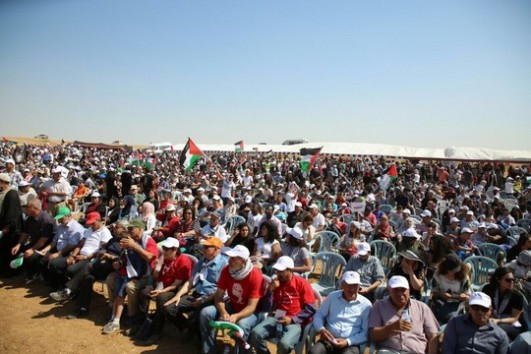 “I will not come with you to the march!” my adolescent son exclaimed. “I’ll sit at home and watch it. Wasn’t our home taken away from us during the Nakba? So here. You go, and take your little boy who doesn’t understand anything, and leave me alone.”

“Don’t you support the right of return?” I ran after him to his room. “I want to know the truth. Answer me!” The Jewish mother in me got the better of me.

By the time I got to his room, he was tucked in his bed. “I support it, of course I do. I just don’t think that spending the whole day travelling just to stand in the sun waving a broomstick and a plastic flag will give you back your village, that’s all. And enough with all the emotional blackmail, please.”

My parental authority died that minute, and left me speechless and mournful. I dragged myself out of his room, completely resigned, as if I had just been expelled from my village. He may have a point, that adolescent brat. Another march and another protest – for 68 years, and what for? Why is it important? And in the current climate in Israel, is there hope at all?

Adam, my younger son, got out of the shower and tried his luck at rebelling, albeit to no avail. I told him he could take whatever he wanted from the sweets cabinet as well as a ball, so that he could be social and play with the other kids while important men delivered their speeches.

I took the biggest Palestinian flag I could find – it came in a special delivery from Bil’in – loaded my car with Palestinian lace and dressed in red and white complete with a checkered scarf. Only a hat was missing to be a walking Palestinian flag.

In solidarity with the Palestinians of the Negev, the Association for the Protection of the Rights of Refugees organized this year’s march in the south, to link the protest of both past and present house demolition and land expropriation. The organizers were genuinely concerned that the northerners will let down the despaired Bedouin and not turn up. A great deal of effort was put into booking buses from virtually every town and village to ensure that the turnout would not resemble the previous protests in Umm al Hiran, Al-Araqib and the Negev villages. Every activity south of the Sharon region is always accompanied by an existential concern: Will the northerners make it or not?

The turnout was surprisingly good: Some say more than 10,000 people came. A wave of Palestinian flags washed the desert. It was hot, dusty, without a single tree to hide under, but there were trimmed wheat fields a few yards away. They probably belonged to Kibbutz Shoval.

I was looking for the remains of the Palestinian village Wadi Zubale (Dumpster Valley) – a rather unattractive name. That’s what it was called in the app iNakba where I was searching for more info.

“I couldn’t find anything,” I said to a Balad activist, laughing. “Sixty-eight years ago there were real Bedouin here. They probably lived in tents rather than brick and mortar, that’s why it was so easy to do away with them. Not that the Zionists care where we lived before.” I pretended it to be an expert, which went down well with my interlocutor.

Where north and south meet

Then the march started. Unlike previous years, it was neither long nor difficult, and even started on time. Thousands arrived at the compound in an orderly manner to the sound of loudspeakers playing folk and protest songs, as well as tunes – modern and traditional alike – about the unforgettable Palestine and about the refugees. My heart skipped a few beats when they started naming the representatives of all the parties, associations, monitoring committees, municipalities, and so on. If each of them got to speak we’d spend the next 24 hours here!

To my amazement, this long line of dignitaries stood up, and were asked to mix their soil with that of the Negev, to symbolize the struggle, old and new, for the land. Except the gender uniformity of the spectacle, nothing really bothered me.

The first speaker was former Hadash leader Mohammed Barakeh, who conveyed his mother’s testimony from her village, Saffuriyya, where she had to keep her baby son quiet in a hideout, without enough milk to nurse him. Sadly, the story turned out badly – further proof that the Palestinians didn’t choose to flee.

The best speech in my opinion was Prof. Gadi Algazi’s. He was straightforward and optimistic. “The Nakba continues in the Negev,” he said, “and the residents of the Negev taught us how to fight together. A just popular struggle is possible.”

Another scholar spoke interestingly about the people becoming refugees. Although the Syrians’ plight may seem a lot more dramatic at present, he said, the Palestinian refugee question has lasted the longest.

It was also an opportunity to socialize with my virtual friends and feel a real sense of unity.

As we headed home, my Facebook feed was flooded with inexplicable pictures of happiness and Palestinian pride. And I, for my part, was looking for my flag from Bil’in, to no avail. It was gone with the crowd, and its effort to return continue to this day.