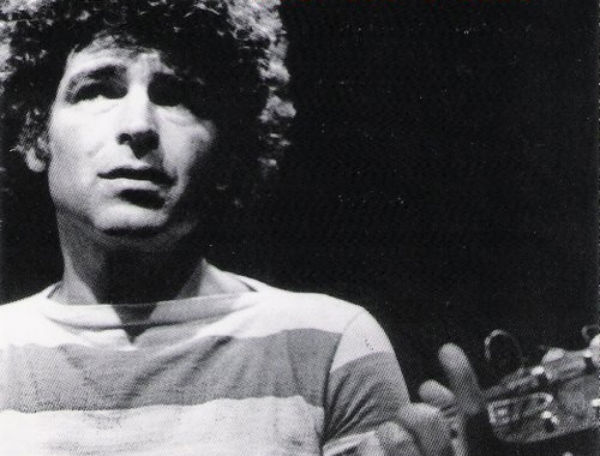 Since the 1960s, it appears as though every culture on earth has grown its own “Bob Dylan”, a singer songwriter, armed with six strings, who draws strongly on the American folk tradition. Our own man was Meir Ariel, but he was much more than that.

Never entirely a protest singer, Ariel chose instead to map the Israeli experience with playful, wise lyrics and simple acoustic guitar. His achievement was enormous and his impact on Israel’s culture lasting. Here’s proof: 12 years after his passing from typhus at the age of 57, a random blogger decides to put away everything, from West Bank tensions to the Lybian crisis, and translate two of his songs.

How did Ariel map the Israeli experience? for one, by composing the monologue of a freed mental patient, urged by the doctors to visit the airport monthly in order to seek calm. On one such visit, he witnesses a terrorist attack. A calmer study is that of a soldier serving in the Sinai desert. While there, he is is reading Ernest Hemingway’s “Islands in the stream” and most of the song is devoted to a scene in the book, one that occupies the soldier’s mind and offers him a sense of escape.

The lyrics in each case are only barely translatable, due to Ariel’s whimsical use of language. Never recognized as a poet by Israel’s cultural Elite, he is certainly a poet in the Dylenesque sense. Following his death, fellow musical legend Ehud Banai composed a Eulogy to him, mourning that: “No one here uses words anymore as you did.”

Ariel’s exploration of politics in song was mild enough to keep him out of trouble, but he got himself into trouble otherwise. in a 1998 interview he made several harsh homophobic statements, He later apologized profusely in a guest article published in “The Pink Times”, a gay magazine. Ariel explained that he is a “complete ignorant” on the subject. Many of his gay fans forgave him. They had no choice. For many Israeli music lover, be they gay or straight, life without Meir Ariel is unthinkable.

Another bit of trouble did spring from the lyrics to a song. In a tune entitled “Public Junkie” Ariel attacks populist politicians for their addiction to the public’s attention. He begins by claiming that all humans harbor an addiction. “I personally am addicted to a piece of hash” sang Ariel, and had the police shortly in his back yard, pulling out cannabis plants.

These are hardly be the most exciting music legend anecdotes ever told, but they do shed light on the identity of this Israeli legend, He was a kibutznik, relaxed and a tad aloof, a curly-headed Sabra, with the thorns to match. He was also a veteran of the 1967 war who began his career being known as “the singing paratrooper”.

Meir Ariel grew out of conservative Israel of the kibbutz and the army, mixed those attitudes with American musical influence, with a critical eye, with a piece of hash and with an inimitable linguistic playfulness. The resulting songbook is both ambivalent, gutsy and fascinating

The following video is of the song Terminal Lominelt, the one dedicated to the former mental patient’s visit to Ben Gurion airport.. it is taken from the tour documentary “Meir Ariel’s election campaign” produced in 1987. The song is a fantasy critique on Israel’s fertilization of Europe and America, our sense of volnurability and general insanity. Following it is a literal, un-rhymed translation in which just about everything, alas, is lost.

If I am not mistaken, Lominelt is an old psychiatric drug.

When I was released, the doctors suggested
that I pay the airport a monthly visit.
I really do like to watch a big plane
take off through a transparent teardrop.
Afterwards the pressure on the washed eye is lighter.

I pick a positive afternoon, go to the port
on the way I tell myself: Here’s another thing of which we’ll have to be rehabilitated.
Myself tells me as we arrive:
so lets start training every day.

The doors guess me and open of their own,
I walk in slowly with plenty of ceremony in my butt
And all of the intercontinentality tickles me here and here
and here.

Taking myself to the bathroom to calm down
stealing a look at the mirror, I see a crazy man.
There are plenty of broads like Terminal.

There she is, standing arched,
two hand grenades, a huge earring, shortening hair
Like some suspicious object next to the Swissair counter.
The security guard gives her a penetrating stare.

I run to the departures board to find me a outbound flight
There one to Zurich via Rome in one hour
Polite loudspeakers give me an urging notice
Here in my side I suddenly feel like a disturbance
A resolution is being squeezed out of me –
I love you Terminal Bella Mia!

I run back Swissair-bound not to miss Terminal
Babes like her – just flip through any magazine
But she’s no longer there,
same with the security officer.
Polite loudspeaker – their tone’s now a bit more firm,
I have to go up and observe.

Here in my side it gets worse all the time
Nearly breathless I bump into the railing
a huge sunset’s light blinds me
A Swissair Boeing glides down, halts and waits.

Here in my side the pressure is relieved
Suddenly the evening sky is lit by an explosion
Down in the field – commotion begins.

When I was released, the doctors suggested
that I pay the airport a monthly visit.
I really do like to watch a big plane
take off through a transparent teardrop.
Afterwards the pressure on the washed eye is lighter.

Indeed, myself says to me
We have found a remedy.
.

No high quality clip could be found for the next song, but the sound quality is good and this is definitely an essential. In 1978 not many Israeli songs dealt with Jewish Israelis’ relationship with the state’s Palestinian citizens. Ariel did, in what many read as a political allegory. Here is a song about a jealous Jewish lover, and an Arab who looks him directly in the eye.

She found her a young educated Arab man,
One I happened to know,
I even saw how it began
One night I got drunk
I felt how it’s crawling
Under my feet
And how it eats me up
To the tips of my nails

Alright, so I can’t surround a woman
365 degrees
There will always be some crack through which
she can suddenly be revealed
to a passerby who’d come and take
whatever she feels like giving
She just grabs for herself
another moment of sudder.

A young educated Arab,
educated to the tips of his nails
A young Arab who looks you
straight in the eye.
A teacher in some village at the Meshulash
who takes part in a mixed amateur theatre group
Of our mashed up regional council

She and I are dating for quite a while
it just so happens
What does she care about politics?
she still gives blow jobs.
She’s simply crazy about acting,
she’s not one of those
but if there’s a course in the area
She wouldn’t mind going even with “them”.

She would go to the meeting
once a week
and come back with happy airs
pretty regularly
with a certain trace of panting
some blush in her cheek
Her living eyes would sting
tears out of me.

After the party he invited me and her
up to his balcony
We drank coffee, drank brandy
his mother popped in every once in a while
He talked about theatre
as a potential bridge
“We can reach understanding”
she shifted over to him, moved.

I looked here, I looked there
I looked in all directions.
Wherever my eyes crawled
they met up with his.
Don’t know what he really
wished to express.
I just kept drowning myself
in the brandy.

Somewhere in the distance
Dogs were barking at the moon
“Let’s move” I said, “It’s late”.
“Hold on, what’s the rush?
Why don’t you stay here tonight”
he abruptly suggested
“You are so drunk after all.”
I told him: “we will make it.”

“Where will you make it to?” he asked
looking in my eyes
I paid him back a look,
I threw: “Jerusalem”.
It took him a little while to produce a smile
without moving a pupil
and then he talked to me
directly into the wine.

“In every sentence you say in Hebrew
There sits an Arab with a Nargila,
Even if it starts in Siberia
or in Hollywood with Hava Nagilla”
I told him in Yiddish:
“She is playing referee with us.”
Inside the bubble of her silence
Our eyes met again.