Amro, a Palestinian activist known for opposing settlements in the West Bank city of Hebron, was arrested by the Palestinian Authority for criticizing its recent arrests of journalists. Upon his release, Amro called on Mahmoud Abbas to revoke or revise a new law that’s been used to target journalists and activists. 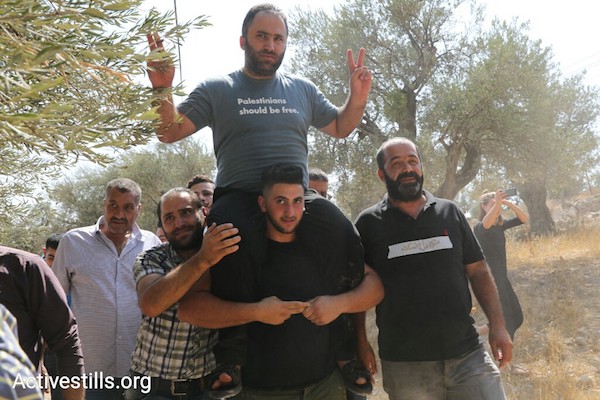 Palestinian anti-occupation activists Issa Amro is carried on the shoulders of a fellow activist upon his release from Palestinian Authority custody in Hebron, September 10, 2017. (Oren Ziv/Activestills.org)

A Palestinian Authority court on Sunday released prominent activist Issa Amro on bail following his arrest last week for criticizing the PA’s detention and intimidation of journalists. A host of international organizations and lawmakers had condemned the Palestinian Authority for arresting Amro and called for his release over the past week.

Amro was received Sunday afternoon by around 50 fellow activists and supporters outside the Hebron court and later at the headquarters of Youth Against Settlements, a local anti-occupation group he co-founded and runs.

Palestinian Authority President Mahmoud Abbas recently signed an “Electronic Crimes” decree, effectively curtailing what little free speech existed for Palestinians under Palestinian law, and which was believed to target online dissent against the PA, particularly on social media. The new law was roundly criticized by rights groups in Palestine and around the world. Israel also regularly arrests Palestinians for posts on social media.

Amro called directly on Abbas to revise the new law so that it “respects freedom of speech and freedom of expression for all journalists and all Palestinians.”

Asked for which particular social media post he had been arrested, Amro said: “I was arrested for [publishing] a post on my Facebook account asking to stop intimidating Palestinian journalists and Palestinian human rights defenders.”

Amnesty International put out a statement last Monday calling for Amro’s immediate release, saying it was “outrageous that a prominent human rights defender has been arrested simply for voicing his opinion online.” 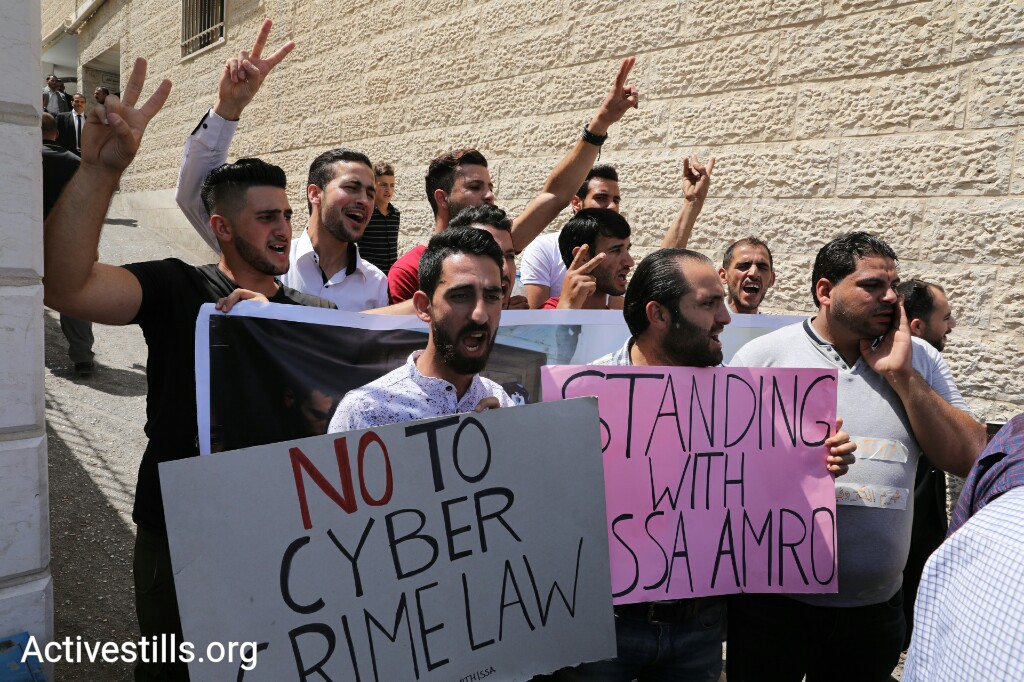 Supporters of Issa Amro outside the Hebron Public Prosecution building in Hebron, awaiting the well-known activist’s release after nearly a week in custody for criticizing the PA. Amro has been charged under a new ‘Cyber Crime Law,’ which has been roundly criticized for limiting free speech. September 10, 2017. (Oren Ziv/Activestills.org)

Thirty-two U.S. congresspeople sent a letter to Secretary of State Rex Tillerson last month urging him to intervene on Amro’s behalf with regards to the Israeli army’s charges against him.

Michael Schaeffer Omer-Man and Yael Marom contributed to this report.

emailemailemail
Before you go…
A lot of work goes into creating articles like the one you just read. +972 Magazine is nonprofit journalism, owned by many of our writers, editors, and journalists. In order to safeguard that independent voice, we are proud to count you, our readers, as our most important supporters. With your support, we can keep +972 Magazine a strong, independent, and sustainable force helping push the global discourse on Israel/Palestine.
DONATE
More About Hebron