Every time I hear about another Druze who refuses to go to the army, I think about how he won’t have to suffer. He will avoid the trauma of becoming the human property of the IDF. 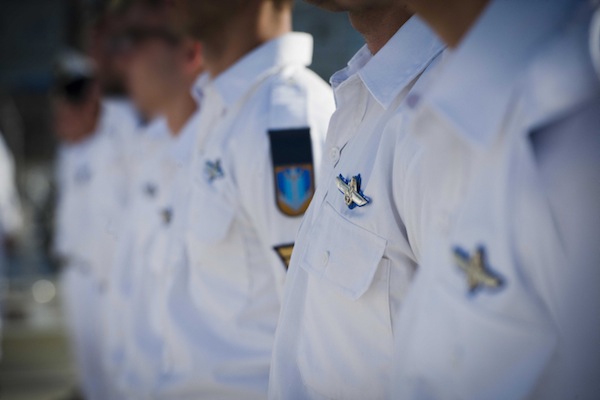 It was 2 a.m., I was lying on the ground, my backpack under me. The commander yelled: “Soldier, straighten up!” and I, an exhausted soldier, didn’t understand. All I wanted was a place to escape to, a framework that would take me in. Today I understand that I was the IDF’s property, like every Druze, like everyone who serves in this army. It was a long and tiring day, the day I finished my enlistment process that unfortunately most Israeli children will have to undergo.

My army experience began with great excitement. Between the hallways of the IDF induction base in never-ending lines. We were children, full of wonderment. I remember exchanging words with others. I made small talk on the bus after waving goodbye to the parents of my friends. My parents did not come because I never told them I was enlisting. As we drove off, I looked back at my friends’ parents and all I could think was, “I am going to protect you, to protect you from an enemy that sees you only as an enemy and wants to cause you harm.”

I waited three years for another vaccine or x-ray of my teeth. Today I understand that our time was meaningless. We each received dog tags and military IDs with our personal number — that’s it. That’s all I was during my service. A number. In the eyes of the army, that was the moment I ceased being Fayez Abu Hayeh; rather I was turned into an entity defined by six digits. I was so excited back then. A day before my enlistment, I finished my final matriculation exam in math. My induction symbolized the end of my childhood and the beginning of a real, adult life. How naive I was.

Then came Operation Pillar of Defense, in which Israel decided to attack “terror” targets in Gaza. It had been nearly two years since I enlisted, I was 20 years old and serving in the navy. I worked as a mechanic on missile boats. We were assigned to one of the career soldiers, alongside whom we worked on and fixed engines.

I remember it like it was yesterday. The time was 4 p.m., and I had just returned from firefighting training, so that I could be part of the emergency force in case there was a fire on base. I came back to my platoon only to realize everyone was gone. I called a friend who told me that we received an order — to check the engines on long-range boats. We weren’t allowed to ask about the details. We did our job and went back to our routine, going out to eat falafel without a care in the world. 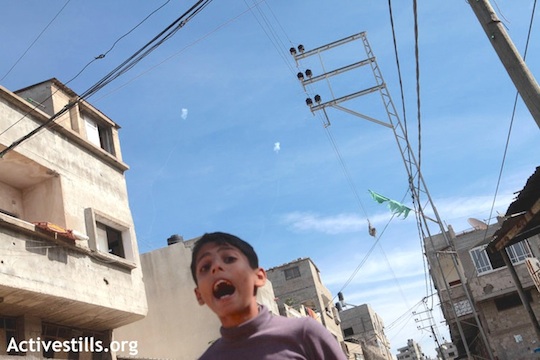 A Palestinian child in Gaza on the third day of Operation Pillar of Defense in 2012. (Activestills.org)

Two days later I discovered that two of those missile boats attacked targets in Gaza; one of them opened fire on a warehouse that Hamas had turned into a bunker for weapons. The second target was a mosque. Both the “bunkers” blew up. One contained weapons, the other people. You know, the place people go to take cover in the shadow of God, in his “bunker.”

It was at that moment that I realized I was the property of the IDF. Then, only then, did I understand that I was part of a dangerous system that only brings about destruction. No more guns, I told myself. That slap to the face continues to ring in my head, especially every time I hear about another Druze who refuses to go to the army. It must be so nice, I think. He won’t have to go through the trauma. He will avoid the trauma of being the human property of the IDF.

Channel 2 news wouldn’t leave us alone. Another update on another attack on a “terror target.” I remember the fear that gripped me and my friends, people who were like brothers to me after four years of studying together in an officer’s school in Acre. I remember how I learned to love the traditions of the people with whom I ate during Friday night dinners and on Passover. Inside, however, I loved dancing dabke most of all.

After I came to understand my trauma from military service, a friend who served with me asked: “Fayez, how can you still defend them when they hide weapons under homes?” and until today I still do not know how to answer. I do not think I have ever been able to articulate my feelings about being too small a cog in a machine of death, that I am not interested in who is right and who is wrong, and which side counts more bodies. The eight difficult days I spent there after realizing that the boat I worked on destroyed a mosque helped me understand that all I ever wanted was to cease being the property of people who are sending us to kill and be killed. 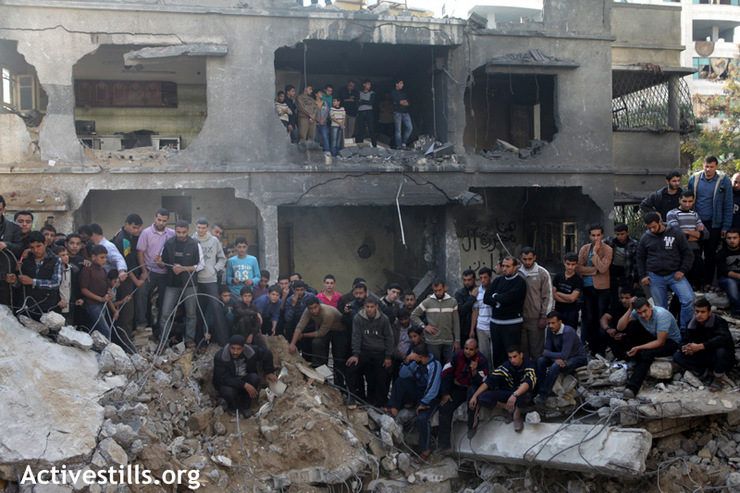 Two members of the Al Dalu family, Mohammad and Raneen Al Dalu were found under the rubble four days after the Israeli military airstrike which killed 9 members of the same family, Gaza, November 22, 2012. (Photo by: Anne Paq/Activestills.org)

I’m from Beit Jan, a village with the highest ratio of slain soldiers to number of residents in the country. And yes, I believe that I still live in a country of laws. I am a law abiding citizen. But what is the law in this country? What is the point of a law that turns innocent children violent? What is the meaning of the same law that makes it okay to kill? And why, for God’s sake, is there no law in this country that prevents harming innocent children in Gaza or the West Bank, yet there is a law that determines who is and who isn’t IDF property?

Today I am 25 and a theater student in northern Israel. I went back to my parents’ home due to financial issues. It is too expensive for me to sit at a cafe once or twice a week, not to mention pay rent. As property, we were never educated about financial responsibility. As property, we were abandoned by the army with our testimonies. With our traumas.

I’m traumatized, because I was IDF property for three years.

Fayez Abu Hayeh is a former staff sergeant in the IDF, a theater student, and a production coordinator. This article was first published in Hebrew on Local Call. Read it here.