I grew up believing the Arabs wanted to throw us into the sea. Then I met a Palestinian from Gaza, and started to question everything I was ever taught. 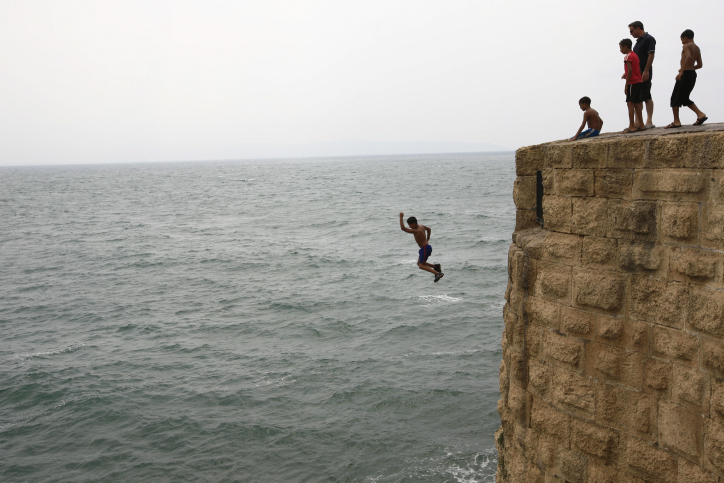 A young boy jumps off a wall into the Mediterranean Sea in Akko. (Nati Shohat/Flash90)

As a young girl I believed that Arabs were evil. My belief wasn’t based on personal experience — it was just common knowledge. As befits a coastal country, Israelis would often talk about “throwing people into the sea” — either the evil Arabs throwing us into the sea, or us throwing them in first as a preventive measure.

I spent first grade studying in a bomb shelter because of the first Gulf War. In elementary school, I spent the breaks walking amid the debris and rubble left behind by suicide bombings in Tel Aviv. My high school years were darkened by the shadow of the Second Intifada. This all came together to reinforce a fervent, indiscriminate hatred of the faceless Other who was out to harm us.

Today I work with Israelis and Palestinians at B’Tselem, a human rights NGO that strives to uncover the injustices inherent to the occupation.

This change in my worldview did not happen overnight, and it wasn’t a change that my family and friends could easily accept. It began with a chance meeting with a young Palestinian during a family trip to the United States. He was a friend of friends, he was my age, and we had shared interests. He was from Gaza. He told me what Israel was doing in Gaza, and I told him that that wasn’t possible. It must just be propaganda. After all, it’s common knowledge that Arabs are bad and that Israel’s army is “the most moral in the world.” We became friends and would chat online. He would send me links with information on Gaza. I took it all with much more than a grain of salt.

As the years passed, I read more, studied, met other Palestinians and got to know peace activists. The realization that my country doesn’t always do the right thing, and that not all Arabs are bad, shook me up — it went against everything I was ever taught. The realization that injustice was being committed in my name was hard to swallow. My parents had fought so hard to immigrate to Israel. They escaped the tyranny and anti-Semitism of the Soviet Union in order to reach their promised democracy, where there may be enemies all around but none from within. How could I look them in the eye and tell them that a democracy cannot rule another people, let alone subject them to a Kafkaesque hell.

There was no shortage of semantic discussions over words like “Palestinians” or “occupation.” I was always ready to leap in head first — that is, until I realized that semantics aren’t the point. The heart of the matter stays the same whether you use the word Palestinians, Arabs, or just people; whether you use the word occupation, tyranny, or legitimate settlement. The reality stays the same, only the stories that we tell ourselves change. It’s not easy to change your views. It doesn’t happen overnight. There were four years between first meeting the boy from Gaza and the start of my political activism. Four years filled with introspection, personal and inter-personal struggles, with heated family arguments and slammed doors whose harsh echoes still resonate within me. 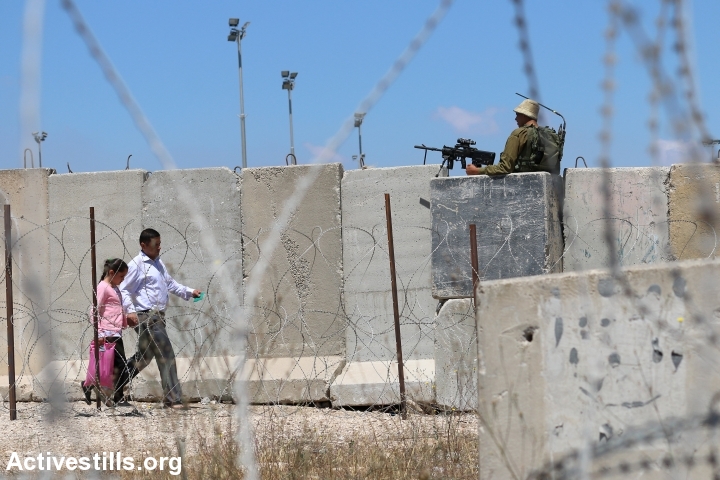 Palestinians are turned away from Qalandiya checkpoint after being forbidden from crossing over to Jerusalem to attend the final Friday prayers of Ramadan, June 23, 2017. Israeli authorities allowed women of all ages, men over 40 and children under 12 to enter Jerusalem without military permits on Fridays during the month of Ramadan. (Haidi Motola/Activestills.org)

I began reflecting on all this because this month marks 50 years since the start of the occupation. That’s more years than I have been around. In fact, it’s a lifetime. My parents immigrated into this reality. Will this also be our children’s reality? I wonder how many future generations will be molded into the worldview that Israel is moral and Arabs should be thrown into the sea. How many children will grow up in a reality in which phrases like, “flatten Gaza and make it a parking lot,” are tossed about without anyone so much as raising an eyebrow?

When I speak to groups about my work at B’Tselem, I am sometimes asked if I have hope. I now answer that hope is not relevant in this case. It is a luxury that cannot be a prerequisite for our work. We must continue to fight injustice, with or without hope, because otherwise we become party to it. We must continue to engage in dialogue with people who disagree with us, or see us as enemies from within. As I learned from my own experience, only by meeting other people, only through discourse and understanding — and, of course, by exposure to information — can the world begin to change.

This month marks 50 years of occupation. As a 19-year-old Israeli, I would have said that we are simply doing what is necessary to survive. As a 32-year-old Israeli, I know that we are simply continuing to do what we have been doing for the past 50 years, because there isn’t a good enough reason to stop the swing of this wrecking ball’s pendulum. This month marks 50 years of occupation. What are you going to do so we don’t see 50 more?