The IDF long ago banned the use of .22 caliber bullets for crowd control, but appears to have been used to shoot at a 13-year-old Palestinian boy earlier this week. The doctor treating him claims it was a dum-dum bullet, an expanding bullet illegal under international law.

Mohammad al-Kurdi, a 13-year-old Palestinian boy from the Aida refugee camp just outside Bethlehem, is lying in the intensive care unit of a Beit Jala hospital due to internal injuries he suffered from IDF fire on Monday. 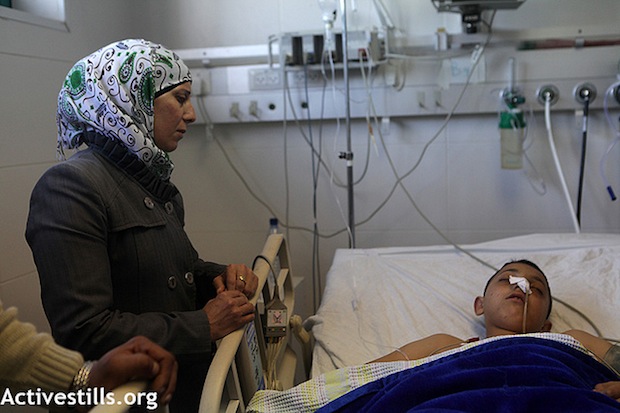 The IDF Spokesperson’s Unit would not confirm the exact incident in which Mohammad was shot, but did state that soldiers used “crowd dispersal methods” in response to Molotov cocktails and stones being thrown from the Aida camp, which is adjacent to Rachel’s Tomb. The IDF spokesperson told me that they proceeded to shoot what they define as live ammunition (as distinct from accepted crowd dispersal methods, which include sometimes lethal rubber-coated bullets) at the Palestinian “main inciters” only after “makeshift grenades” were hurled at them; standard IDF rules of engagement.

According to an eyewitness on the ground I spoke to, Mohammad and other children who were in the line of fire did not throw any “makeshift grenades” of any kind, but were rather playing with fireworks. “I absolutely saw at least two fireworks that exploded well short of entering the Rachel’s Tomb compound,” he said, adding that he did see Molotov cocktails burning on the outside of the wall of Rachel’s Tomb.

The exact circumstances of the incident require further investigation, but the doctor who performed surgery on Mohammad says that he believes he was wounded from shrapnel that entered his body, emanating from what he claimed were “dum-dum bullets,” or expanding bullets, that were shot at the ground right next to him. Activestills photographer Anne Paq, who was at the hospital and spoke to the doctor on Tuesday, took photographs of the X-rays. Here is one of his torso: 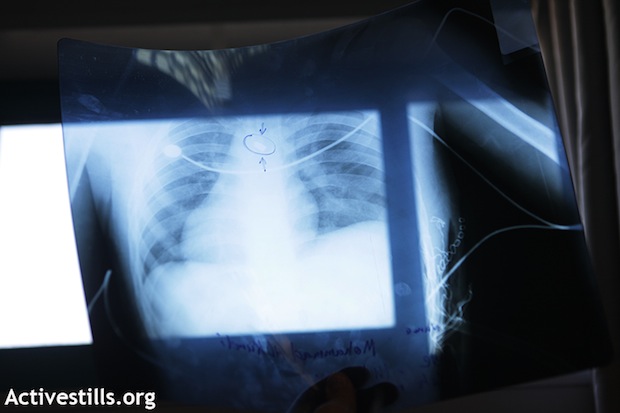 This is a serious allegation, as dum-dum bullets are considered a war crime and the IDF is not known to use them. However, the a specific type of bullet, the small .22 caliber bullets shot by a Ruger 10/22 rifle, were banned by the Israel military advocate general in 2001 as a means for crowd dispersal, because even though they are small, they can be lethal. Despite being banned as crowd dispersal methods, this bullet is still being used on various occasions during protests, and it kills. In 2009 it killed a teenager in Hebron and a protestor in Nil’in in June. It was used again in Nabi Saleh in 2011, injuring a Palestinian in the lower part of his body.

The doctor who performed surgery on Mohammad said there were spots in his body where the shrapnel hit too close to internal organs to risk surgery to remove them, so they will remain in his body. The doctor, who also examined a 16-year old Palestinian named Odai – wounded in the head in the same area on Monday and then taken to Hadassah hospital – claims he too was wounded by a dum-dum bullet.

While the IDF is busy defending its own classifications of legitimate crowd dispersal methods, Palestinian children are being wounded, permanently scarred and at times killed. The fact that rubber bullets – which is just a steel ball encased in hard plastic – and tear gas canisters are fair game doesn’t really matter since they all kill. It only matters as far as the IDF trying to justify the wounding and killing of its enemy.

According to a B’Tselem report on IDF crowd dispersal methods, security forces have killed at least 46 Palestinians in the West Bank when firing live ammunition at stone-throwers.

I realize there is a reality of war and clashes between Israelis and Palestinians, though it is totally asymmetrical. But the only thing I can say here is: Does it really matter which weapon is used or how the IDF classifies and justifies it to the media and itself?  At the end of the day, it doesn’t matter how you wound or kill kids, just that you are wounding and killing kids! Such a cycle of violence won’t stop just because you’ve decided it is legitimate according to your own military standards of justice.