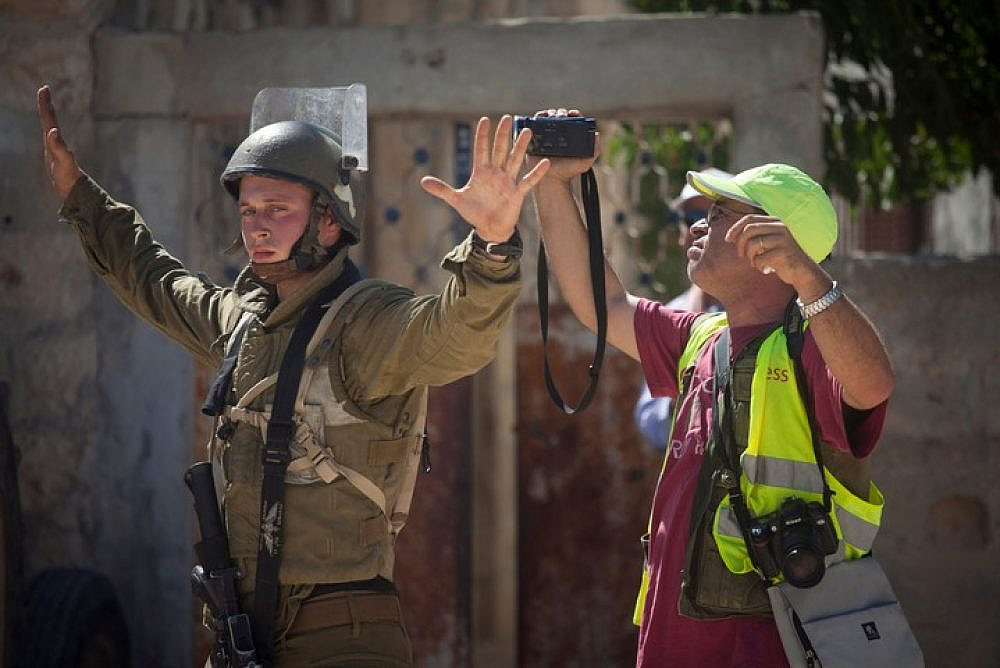 An illustrative photo of an Israeli soldier blocks a journalist from filming in the West Bank village of Nabi Saleh. (Flash90)

2019 was a year of relative calm for the IDF Censor. According to official figures provided to +972 Magazine, Local Call, and the Movement for Freedom of Information last month following a freedom of information act request, the censor barred the full publication of 202 stories in media outlets, and partially redacted another 1,973 stories.

Compared with figures that we have been gathering dating back to 2011, last year saw the least direct censorship of news outlets over the past decade.

All media outlets in Israel are required to submit articles relating to security and foreign relations to the IDF Censor for review prior to publication. The censor draws its authority from “emergency regulations” enacted following Israel’s founding, and which remain in place to this today.

These regulations allow the censor to fully or partially redact an article, while barring media outlets from indicating in any way whether a story has been altered. However, while legal criteria defining the IDF Censor’s mandate are both strict and quite broad, the decision of which stories to submit for review remains in the hands of editors at media outlets.

The drop in intervention by the military censor in 2019 is even more apparent when compared to 2018, a peak year for censorship. That year saw 363 stories barred from publication (nearly one a day), while 2,712 more stories were partially redacted.

The shrinking of the scope of censorship was also accompanied by a drop in the number of materials filed by media outlets to the censor. In 2019, publications filed 8,127 stories for the censor’s review — around 25 percent fewer than the year before — which was itself a relatively low number.

Yet even in a “weak” year, this means that there are over 200 stories that journalists found newsworthy but could not make public, and more than 2,000 stories that faced some sort of external interference.

This is still a huge number, considering that no other country in the world that defines itself as a democracy imposes such an obligation on journalists to receive a government official’s approval prior to publication. Since 2011, 2,863 stories have been scrapped by the censor and 21,683 stories have been redacted.

The military censor, of course, does not share information about the nature of the stories it conceals from the public, nor does it offer a monthly report of these activities. This makes it even more difficult to understand why there was such a drop in censorship last year.

In our report about 2018, we surmised that the spike in censorship may have been connected to Israeli air strikes in Syria and Lebanon. In 2019, however, Israeli politicians — especially around the time of the elections in April and September — openly bragged about taking such military actions. That public aspect could offer some form of explanation.

“These figures which we are seeing year after year indicate a complex and problematic phenomenon,” says Or Sadan, a lawyer with the Movement for Freedom of Information, who also heads the Clinic for Freedom of Information at The College of Management in Israel. “The military censor literally prevents the public from being exposed to many pieces of information which media outlets have deemed worthy of reporting. The free press is the tool for the public to educate itself on developments in the country, including security-related matters.”

“In spite of security sensitivities,” Sadan continued, “the relevant bodies must keep the number of cases where information is withheld by the censor to a bare minimum, and only in extreme cases where there is an actual fear for national security. We will keep tracking these figures to learn about developments over the years.”

Another aspect of the censor’s work is its operations in the Israeli national archives. Since the archives went fully online, and no longer have a physical library open to the public, the military censor has been reviewing all declassified materials, which has sometimes led it to hide files that had already been made public.

When the archives’ digitization began in 2016, the archival authorities submitted some 7,800 files for the censor’s review. In 2019, the number went down to 3,200. Unlike news pieces, the censor declined to inform us of how much archival material had been redacted, responding only that “the vast majority of documents were approved for publication without alterations.”

The military censor’s growing lack of transparency is itself a cause for concern. The censor is fully exempt from Israel’s Freedom of Information Act, and though it has essentially volunteered to answer +972’s questions in recent years, its answers are getting shorter by the year.

In the first responses to our appeals in 2016, the censor released the number of archival documents that were redacted, and the number of cases in which the censor demanded that a media outlet remove information published without prior approval (an average of 250 cases a year). Despite repeated attempts, these figures have not been given to us in recent years. (You can read more about +972’s policy vis-à-vis the censor here).

In the censor’s latest response, dated February 2020, we also did not receive any information about the number of books redacted by the censor — a number that previously stood at several dozen a year.

The Chief Military Censor, Brigadier General Ariella Ben-Avraham, is stepping down from her position in the coming weeks, earlier than planned. According to several media reports, she will be joining the Israeli “NSO Group” – a cyber company which produces spyware and has been associated with several dictatorships’ efforts to spy on journalists and human rights defenders.

During her first year on the job as chief censor, Ben-Avraham expanded her jurisdiction from mainstream media outlets to social media and independent outlets, including +972 Magazine, demanding they file stories with the censor for approval. Ben-Avraham also decided to stop answering our questions on the number of times the censor actively removed stories that had already been published.