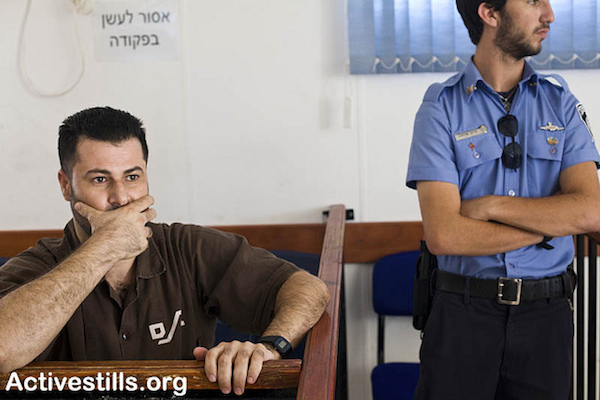 Abdullah Abu Rahmah at his trial in the Ofer Military Court, September 15, 2010. (Photo by Oren Ziv/Activestills.org)

Abdullah Abu Rahmah, one of the central organizers of the popular resistance protests against the separation barrier in the West Bank village of Bil’in, was convicted of obstructing the work of a soldier by an Israeli military court this week. He will likely be sentenced to four months in prison.

Abu Rahmah, who was recognized by the European Union as a “human rights defender” dedicated to non-violence, previously served over a year in prison for organizing “illegal marches” as well as for “incitement.” All political demonstrations are illegal for Palestinians under Israeli military law.

Among other things, Abu Rahmah was arrested in the past for possession of spent tear gas grenades the Israeli army shot at protesters in Bil’in. The indictment, in which he was not convicted, referred to the used grenades as “weaponry.” 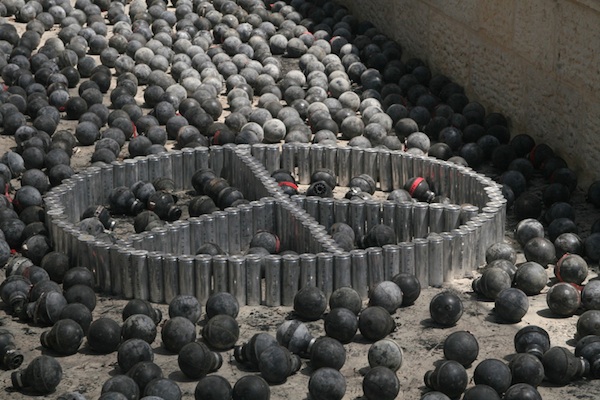 A display of spent tear gas canisters for which Abu Rahmah was indicted but not convicted, Bil’in, January 3, 2010. (Photo by Oren Ziv/Activestills.org)

This week Abu Rahmah was convicted by a military court of obstructing the work of a soldier. The incident occurred in 2012 when he attempted to stop a bulldozer from clearing the route for the construction of a fence in the Beitunia area of the West Bank. According to AFP, Abu Rahmah’s conviction will include a four-month suspended sentence for an arrest in 2009, in addition to another that the court will decide on in the beginning of December.

Abu Rahmah’s attorney, Gaby Lasky, told AFP that the conviction is part of the army’s continual harassment of non-violent activists. The indictment is politically rather than criminally motivated, she added.

Regarding Abu Rahmah’s previous arrest, it is important to clarify that any and all Palestinian protests in the West Bank are illegal under Israeli military law. Therefore, any march is also deemed illegal. In addition, the crime of “incitement” does not necessarily refer to incitement to violence, but rather to any form of demonstration or protest.