Jawaher Abu Rahmah, 36, died the morning after inhaling massive amounts of tear gas at a protest in Bil’in last year. The exact cause of her death, however, is still unclear. Why has the army refused to open an investigation into the matter and where does the case stand? A report from one of the family’s legal representatives. 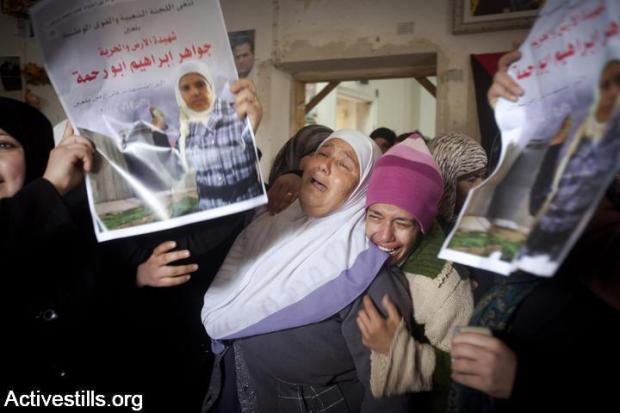 We may never know what caused Jawaher Abu Rahmah’s death on January 1, 2011. Following the incident the IDF Spokesperson’s Office launched a disinformation campaign asserting first that she was not at the Bil’in demonstration that preceded her death, then claiming she was at the demonstration but died from her own health problems, and finally that she died as a result of negligent medical treatment in the Ramallah hospital, and in any case no investigation was necessary. In response to our outrage, the IDF’s legal wing, the Military Advocate General Corps (MAGC), demanded that we, her family’s lawyers, bring evidence to convince them an investigation was warranted.

Over a year and a half of correspondence and a petition to the Israeli High Court of Justice brought us to the court-offered deal on Wednesday, July 18, under which the Abu Rahmah family, with the help of Yesh Din, will gather all evidence it can access by September 1, and the MAGC will have two months to decide whether or not it will finally open a criminal investigation into Jawaher’s death, nearly two years after the incident.

“Where is the so-called ‘deal,’” you ask? After all, our position from the moment Jawaher died has been that investigations yield evidence on which a case can be constructed – not the reverse – and that the victims, their families and their lawyers are not to be saddled with the burden of bringing evidence to the investigators to persuade them that the incident raises criminal suspicion. At least, that’s what our law school professors taught us on opposite sides of the world, so we assume it’s a fairly universal principle.

Moreover, just three months after Jawaher died, the MAGC announced a change in policy determining that an independent criminal investigation will be opened automatically into every unnatural death in the Occupied Palestinian Territories during the course of a military operation (other than armed hostilities). We argued that so long as on the day of the policy change the decision was pending in Jawaher’s case, this policy applies to her death. The MAGC insisted it was not a retroactive policy; she died too early.

Last Wednesday we were backed into a corner faced with the choice between no investigation at all, and reverting back to where we started a year and a half ago – except that now the witnesses’ memories of the details so essential to an investigation are faded, and the family’s and supporters’ hearts have hardened from the injustice surrounding the loss.

But Subhiya Abu Rahmah hugs and kisses and thanks me, with a smile from ear to ear. A year and a half ago she lost Jawaher, her daughter, after a demonstration on their land; almost two years before that, her son Bassem was shot and killed at a demonstration in Bil’in; four years ago her son, Ashraf, was shot in the foot while handcuffed and blindfolded at a neighboring Ni’lin demonstration. And yet she listens patiently to what meager morsels of justice the foreign authority that has dictated so much of her life already is dangling before her. She tells us she agrees to the court’s offer.

While we convey her consent to the court, I viscerally detest the circumstances that set the stage for this dark theater in which she is thanking me for an outcome so twisted and wrong. I suppose she is thanking me for being a voice for her. It may not be the exact voice she would raise given the opportunity, and it may mean participating in a system she would rather not exist at all. But it is better than remaining silent.

I excuse myself to the scorching sun of the courtyard in an attempt to burn off my confusion and, desperately seeking any kind of order, watch ants transporting supplies from one bunker to the next. My understanding of my own privileges has led to my desire to wield them to raise silenced voices before the privileged and make them listen. But here I am, again, explaining the oppression of the occupied to the occupier, and assenting to only slightly less oppressive results.

I was at the demonstration and inhaled some of the same gas that led Jawaher to her death. On a human level, whether or not on a legal level, I can state with confidence that way too much gas was shot into the large crowd of civilians that day.

And still, I don’t know how Jawaher died; you don’t know how Jawaher died; and most importantly, her family and her community don’t know how, why, who, or if to blame. It could be that a criminal act took place – that unlawful amounts and concentrations of tear gas were fired at the atypically large, and ironically named, “last day of the wall” demonstration that day, or that the tear gas was fired illegally into the residential area of the village where Jawaher was standing, rather than at the heart of the demonstration as a method of dispersal. Alternatively, it could be that the tear gas Jawaher inhaled triggered other health problems that otherwise may never have affected her, or that negligent medical care is responsible for her death, or some combination of all of the above, rendering the crime of a philosophical nature rather than a legal nature – the fact that the IDF is in Bil’in at all, that it is illegal for Palestinians to gather and protest the occupation, and that the wall is there to expand Israeli settlements.

Either way, the IDF is now responsible for over a year and a half of dismissing Jawaher’s death as if its cause is of no consequence. The State of Israel is responsible for sending the clear message to her family and friends that it would rather invest taxpayers’ money in extensive correspondence and legal proceedings than conduct a professional and independent investigation, which could have been concluded by now, and might have confirmed that there was no criminal act involved in this tragedy.

I cannot swallow Subhiya’s thanks. But eventually I can smile again when I kiss her goodbye at the end of the day, because I realize that I already have thanked her for allowing me to take part in her struggle, and I will continue to demonstrate my gratitude.

Emily Schaeffer is an American-Israeli human rights attorney and activist based in Tel Aviv. The views expressed above are hers alone.