The Israeli army arrested 10 Palestinians and five Israelis in the South Hebron Hills today (Saturday) while they were trying to reach Palestinian-owned land next to the illegal outpost called Mitzpeh Yair, in the southern West Bank. 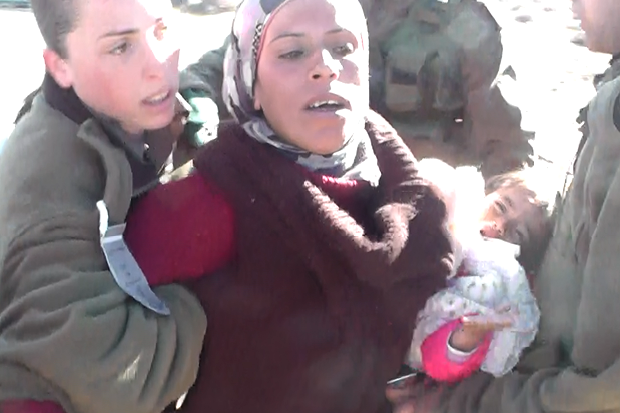 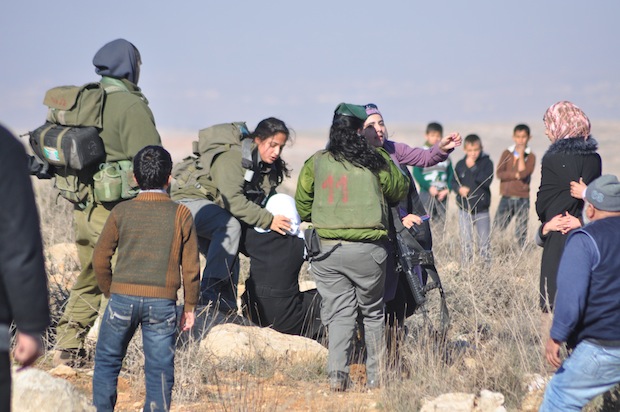 According to Guy, an Israeli Ta’ayush activist who filmed the video below, the Awwad family from Umm al Ara’is was accompanied by Palestinians from Susya and Israeli activists to try and reach their land, since in recent months the army has been increasingly preventing them from doing so.

As soon as they got there, the IDF soldiers declared it a “closed military zone” for reasons that are unclear and require no explanation. Before giving the dozens of people there even five minutes to evacuate, they simply began making arrests. A Palestinian woman carrying her child who approached her husband while he was getting arrested was immediately arrested as well:

According to reports from Israeli activists, most of the 15 arrested were released a few hours later without being questioned or charged with anything. The mother, (whose child is already back with the released father) and an Israeli activist, are both still in custody and apparently being held on accusations they resisted arrest and/or assaulted an officer.

The settlers who live in this illegal outpost often harass Palestinians in this area while they try to cultivate their crops and graze their sheep. It has been going on for years. However, it is not just the settlers but the army, who not only doesn’t usually stop them, but closes off the whole area on a regular basis – in direct contradiction of High Court rulings that the army must both act to allow Palestinians access to their land and protect them from settler violence.

The IDF’s Civil Administration seems to have targeted this area as a “disputed territory,” systematically issuing “closed military zone” orders, which force all the Palestinians to evacuate the area or face arrest. This, despite the fact that the Civil Administration itself recognizes the area (In Area C of West Bank) as Palestinian-owned land and even though no settlers have provided any evidence otherwise. Without being able to work their land, these Palestinian communities cannot maintain their basic livelihoods, let alone enjoy freedom of movement and their basic human rights.

Oh and when Israeli elections take place on Tuesday, remember that these Palestinians can’t vote to try and get better representation in the next four years and improve their lives – since they have no such right to do that either.