As violence continues to sweep across Israel-Palestine on Friday, protests in Gaza along the border fence turn lethal when IDF units open fire on demonstrators in the besieged territory. At least 14 Palestinians and four Israelis have been killed since the wave of violence began. 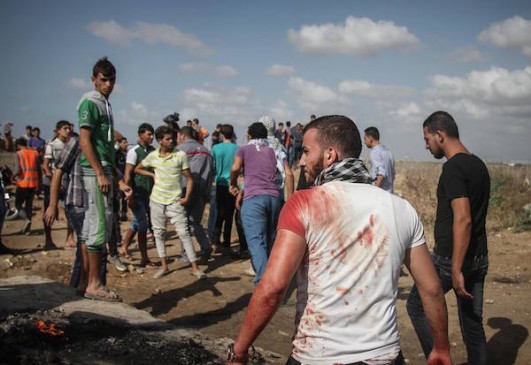 At least six Palestinians were killed and more than 130 wounded during protests along the border of the Gaza Strip on Friday, as violence and unrest continued to sweep Israel-Palestine.

Hundreds of Gazans gathered near the eastern border with Israel, close to the Shujai’ya neighborhood of Gaza City. The Israeli army began firing at Palestinians with live rounds as the demonstration approached the Israeli-imposed no-go buffer zone along the border fence. According to an Israeli army spokesperson, the fire was in response to Palestinians throwing stones and rolling burning tires towards army positions along the border.

At the same time, a separate demonstration was also taking place near the border fence at Khan Younis, in the southern Gaza Strip. It was also reported that hundreds of Gazans attempted to get through Erez Crossing in the northern Gaza Strip, but were prevented from reaching the checkpoint by the army. 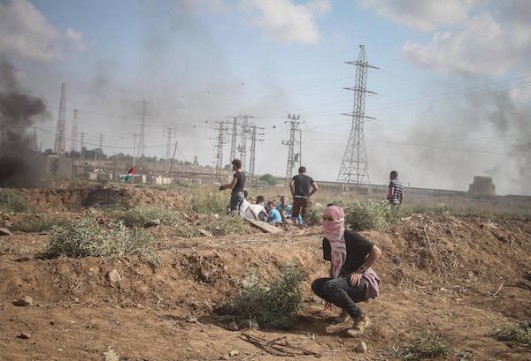 A Palestinian protester crouches during a demonstration in the Gaza Strip that left six Palestinians dead and over 130 wounded when IDF opened fire over the border, 9 October, 2015. (Ezz Za’noun)

The heavy death toll has prompted fears among the Israeli military that militant groups in Gaza may respond with rocket fire into Israel. Late Friday evening, two rockets were shot towards Israel from inside the Strip but failed to cross into Israeli territory.

Over 400 Palestinians and two Israelis were wounded on Friday in various attacks across Israel-Palestine. In addition to the Gaza protests clashes broke out across East Jerusalem and the West Bank, which were dispersed forcefully by Israel security forces. On Thursday night, Israelis attempted to lynch several Palestinians in Netanya and later Friday morning four Palestinians were stabbed by an Israeli teenager in Dimona. 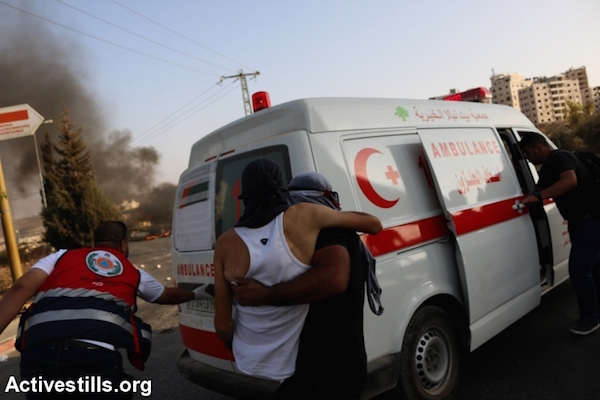 A Palestinian youth is carried to an ambulance during clashes at the DCO checkpoint in the West Bank, October 5, 2015 (Muhannad Saleem/Activestills)

There has been a dramatic spike in violence in Israel-Palestine over the last few weeks, with confrontations over the Al-Aqsa compound leading to a spate of “lone-wolf” attacks by Palestinians and heavy-handed, frequently lethal responses from Israeli security forces. Since the wave of violence began, 14 Palestinians and four Israelis have been killed.