Abdullah Abu Rahmah has a sentencing hearing in military court after being convicted of standing in front of an IDF bulldozer. The nonviolent protest organizer from Bil’in who already served more than a year in prison has been declared a ‘human rights defender’ by the European Union. 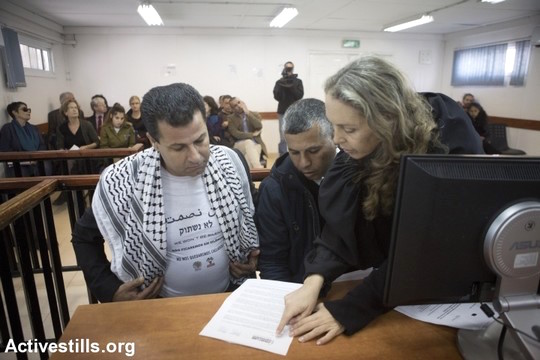 Diplomats from the European Union, Sweden, France, the UK, Finland and Spain were present at a sentencing hearing for Palestinian non-violent Palestinian protest leader Abdullah Abu Rahmah at Ofer Military Prison in the West Bank on Sunday, along with dozens of Palestinian, international and Israeli activists. Abu Rahmah is a central figure in the popular struggle protests in the West Bank village Bil’in, as well as in the rest of the West Bank, and has been recognized by the European Union as a “human rights defender” dedicated to nonviolence.

In 2010 +972 Magazine chose Abu Rahmah as its Person of the Year for his role in raising the international profile of the grassroots Palestinian nonviolent protest movement, and the harm of the separation barrier.

In October 2014, a military court convicted Abu Rahmah of obstructing the work of a soldier for trying to stop a bulldozer that was constructing the separation barrier in the Beitunia area near Ramallah in May 2012. Abu Rahmah was taken in for interrogation at the time, but was later released on bail. The fact that the police did not see fit to extend his interrogation, keep him in jail or impose restrictive conditions on his release, did not prevent the army from indicting and convicting Abu Rahmah.

At Abu Rahmah’s sentencing hearing took place on Sunday the military prosecutor demanded a harsh punishment consisting of a long prison sentence and a large fine. She further claimed that Abu Rahmah is somebody who commits ideological crimes, thus his chance for rehabilitation is low and he must be given a punishment that will deter him from doing similar things in the future.

In a statement released after the hearing, Abu Rahmah said his trial is proof that the army is punishing him for his nonviolent resistance. He stated that there are many young Palestinians who are jailed for the exact same reasons, constituting a blatant violation of their human rights. “I will be sentenced on February 23,” said Abu Rahmah. “All this is happening because I want freedom and justice, for the security and peace of the Palestinians. All we want is to liberate our land.” 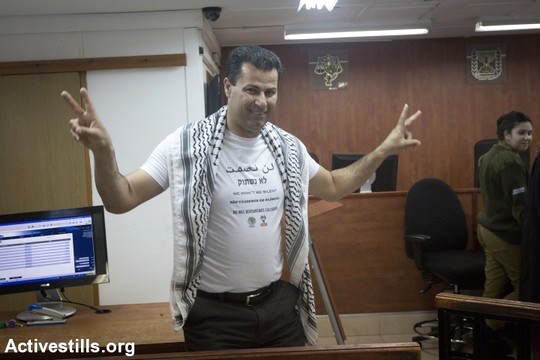 Abu Rahmah is no stranger to Israeli prisons — he was previously jailed for over a year for organizing “illegal demonstrations” and incitement. He has been arrested many times. One of those arrests took place after it was discovered that Abu Rahmah had collected empty tear gas canisters fired by the army at demonstrators in Bil’in. The army referred to the empty canisters as “weapons.”

Demonstrations in the occupied territories are entirely forbidden under Israeli military law, which means that any protest or procession is deemed illegal. Furthermore, even being accused of “incitement” doesn’t necessarily mean incitement to violence, but refers to any form of uprising or protest.

Throughout the hearing, Attorney Gaby Lasky, who represents Abu Rahmah, claimed that his actions never harmed anyone, that he never used violence, and that he was taking part in a nonviolent protest that falls under the legitimate boundaries of freedom of speech. However, the judge countered that the indictment does not refer to a protest, and thus there is no room to discuss freedom of speech in the case.

The military prosecutor also spoke about how the army does not want to harm freedom of speech, but rather channel it into legal avenues. But what are those legal avenues in the West Bank? If protesting, marching and standing in front of a tractor are considered illegal, what exactly is allowed?