Beit Ommar, West Bank—The Islamic holy month of Ramadan is meant to be a time for reflection and spirituality.  But for the 16,000 residents of this rural, agricultural village near Hebron in the occupied West Bank, it has been an unusually tense one. 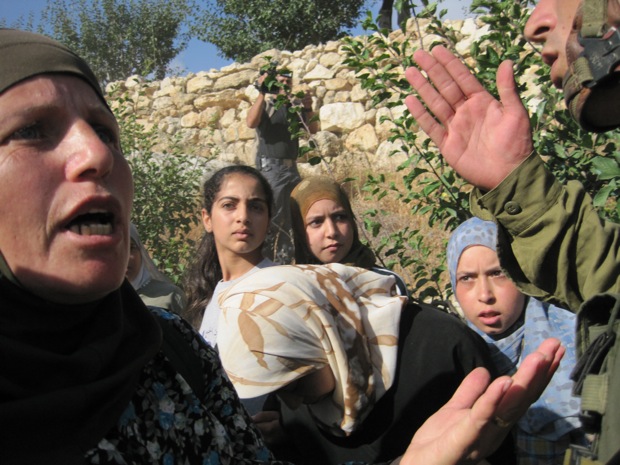 A spate of Israeli army raids at night and arrests of young Palestinians have occurred since the beginning of August, shattering any hope for calm during Ramadan.  While Israeli military incursions into Beit Ommar are common, residents and activists say that the number of raids and arrests that have occurred in August is particularly high.  There have been five occasions this month in which the Israel Defense Forces (IDF) have invaded the village, three of them that have occurred this past week—and the month is not even half over.

Witnesses to the raids and local activists say that the Israeli army has been shooting tear gas, sound bombs and flares into residential areas—in some cases causing injuries—and have arrested fifteen young Palestinians under the age of eighteen this month.  A landmark B’Tselem report recently released highlighted how common the arrest of minors is in the occupied territories.

“It just looked like a training exercise.  It just looked like they were practicing coming into town tear gassing people back and practicing flares,” said one international activist with the Palestine Solidarity Project (PSP), a Beit Ommar-based Palestinian-led direct action group, when asked to describe an August 11 raid he was witness to.

One incursion, which took place on August 6, saw the IDF invade the village and disrupt a party held in a local park meant to celebrate the release of a prisoner from Beit Ommar. Five Palestinians were arrested, and some Beit Ommar residents, including women and children, were hospitalized due to tear gas inhalation, according to the PSP.  A 16-year-old Beit Ommar resident described the scene at the park similarly.

Mousa Abu Marya, a popular committee coordinator in Beit Ommar, said he thinks the high number of raids is meant to intimidate people ahead of September, when the world’s eyes will turn to Palestine as the Palestinian Authority makes a statehood bid at the United Nations.

The August 11 raid affected the Abu Marya house, with tear gas canisters hitting the residence, leaving visible marks on their driveway.  The tear-gas caused the bottom half of their house to become inhabitable for the night.

“Maybe they’re scared of September,” Abu Marya told me as we were sitting in an office at the Beit Ommar-based Center for Freedom and Justice.  “I think they want to make the soldiers ready for anything in September.”

A joint coalition of popular committees, including Beit Ommar’s, who held a popular resistance conference in mid-July drafted a statement that called September an “immense popular battle.”

September is “not the end of the road,” said Younes Arar, the executive manager of the Center for Freedom and Justice.  “But it is an important station in the Palestinian political situation.”

Meanwhile, a senior minister in the Israeli government has said that Israel may call up its reserve forces for September.  The IDF has also purchased $22 million worth of new military equipment in preparation for large-scale September protests.

The Israeli army’s repression in the village has not been limited to night raids, though. For the first time during the month of Ramadan, Beit Ommar residents and Israeli and international activists held a demonstration August 13, protesting land confiscation and the nearby settlement of Karmei Tzur.  At the demonstration, IDF soldiers repeatedly pushed back Palestinian residents of Beit Ommar attempting to access their land near the settlement, which was declared a closed military zone.  Beit Ommar is surrounded by six settlements, of which Karmei Tzur is one.

When the demonstration was over, one Palestinian, a forty-two year old man named Sakhar Abu Marya, was arrested and taken into a military jeep.  Recounting the events later, he said that a hood was placed over his head, and that he was beaten by the soldiers. While he was interrogated, soldiers said that, while they would release him now, they would come to his house later and arrest him.  Soldiers also brought out food and soda to mock Abu Marya, who is fasting for Ramadan.  He was then dropped off at the gate of the Karmei Tzur settlement, without being charged with anything.

Alex Kane, a freelance journalist currently based in Amman, Jordan and a frequent contributor to the blog Mondoweiss, writes on Israel/Palestine at alexbkane.wordpress.com.  Follow him on Twitter @alexbkane.