Dozens of Palestinians active in joint peace groups will no longer be able to cross into Israel to give workshops on reconciliation and dialogue. 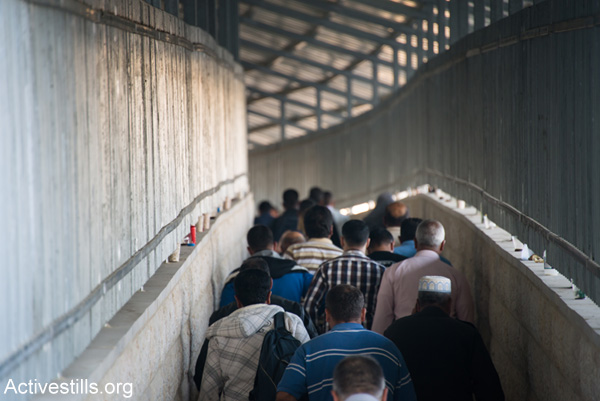 The Israeli army’s Civil Administration, formerly known as the military government, recently informed dozens of joint Israeli-Palestinian peace organizations that it would retroactively revoke entry permits for Palestinian peace activists from the West Bank into Israel.

The change will affect veteran Palestinian activists, many of whom work or even manage peace organizations alongside their Israeli counterparts, and who have led workshops on peace, reconciliation, and dialogue in Israel for many years.

In early January, Lt.-Col. Eyal Ze’evi of the Civil Administration updated the Peace NGOs Forum, which includes dozens of Israeli peace organizations, on the change in policy. Up until that point, Palestinian activists belonging to these groups would use three-month entry permits, which they would renew four times a year.

The Civil Administration — which despite its name is the military arm that manages many aspects of the day-to-day life of Palestinians living in the occupied territories — is charged with issuing entry permits. As part of the change in policy, entry to Palestinians will be limited to 180 days per year, they will not be able to enter the country during the first week following the month in which they entered, and will not be able to appeal a permit request that was rejected for security-related reasons.

The peace groups were surprised not only by the change in policy, but by the decision to retroactively implement the 180-day restriction, which effectively prevents Palestinian activists from receiving new entry permits in one fell swoop. The decision has led these groups to cancel dozens of workshops, speaking events, and dialogue groups scheduled for January and February.

Staff meetings, which generally take place in either Israel or the West Bank, can now only take place in the latter. It is worth mentioning that Israelis can enter Palestinian cities, and that peace and dialogue workshops for people of all ages are continuing on the Palestinian side.

“The whole point of these meetings, in pre-military academy programs and schools, for instance, is that they are joint meetings, which is precisely why this decision makes our activities difficult,” says Uri Ben Assa, from Combatants for Peace. “Our meetings include an Israeli and a Palestinian who tell their personal stories. The Palestinian describes how he used to be part of the cycle of violence — some of our Palestinian activists have been in prison — and how he came to the conclusion that violence is not the way, and that he wants to achieve his rights nonviolently. Young Israelis ask tough questions, which is good, and they receive direct and honest answers while getting another perspective of the situation.”

“If we generally have 10 Palestinians who speak Hebrew and were able to obtain entry permits, now all the work falls on one or two people from Jerusalem. We are forced to cancel our events.”

Pressing on despite the violence

The first signs of a change in policy by the Civil Administration appeared last November. Following a stabbing attack by a Palestinian resident of Hebron who entered Israel with a work permit, the administration froze all entry permits for Palestinians from the Hebron area, including the peace activists among them. Peace organizations see the move as part of the general political atmosphere, which includes stabbing, shooting, and vehicular attacks against Israelis, as well as attacks on left-wing NGOs by the government and right-wing groups.

Activists in the Parents Circle-Families Forum, a grassroots organization of Palestinian and Israeli families who have lost family members to the conflict, believe that there are those who are afraid of the organization’s unique voice.

“Our goal is for people to hear Palestinians talk about their pain and bereavement, who explain how they do not wish to act out of revenge, but rather to promote nonviolence and reconciliation,” explains Doubi Schwartz, the Israeli general manager of the organization. “Today there are moles and different ways of hurting us through bureaucracy.” 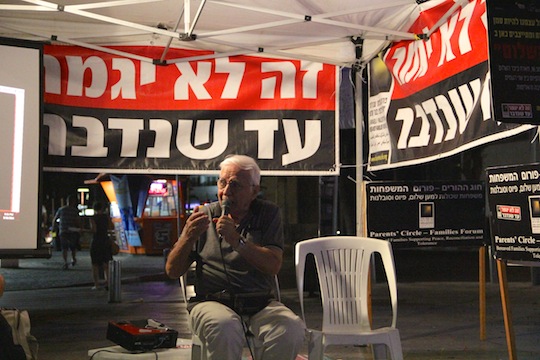 An activist with the Parents Circle-Families Forum speaks at a dialogue tent in Tel Aviv. (photo: Henriette Chacar)

Over the past few weeks, the Parents Circle-Families Forum has been forced to cancel dozens of meetings with 20-30 Palestinian activists. Another group of Palestinians that did not receiver permits will not be able to attend a tour of Yad Vashem, Israel’s Holocaust museum, which was meant to provide the Palestinians with an understanding of the Jewish trauma from the Holocaust.

The organizations have been trying to fight the decision by contacting various people in the Civil Administration as well as members of Knesset. According to a response Schwartz received from the military body last week, the issue is being reevaluated, and the Civil Administration understands that “a comprehensive update often includes mishaps, each of which is assessed and from which we learn what needs to be implemented or changed.” The Civil Administration further clarified that “we have no intention of harming the forum’s activities or the meetings held by different organizations, and therefore we are working tirelessly to reach conclusions.”

The Civil Administration and Coordinator of Government Activities in the Territories (COGAT), the unit charged with coordinating activities in the occupied territories, issued the following response:

The procedures for obtaining entry permits for different purposes that do not require an extended stay have recently been adjusted, and thus are issued for limited periods. In light of the many requests, the issue is being examined.

Let’s be clear: despite what the official response says, the procedures have not been adjusted. They have been changed completely. 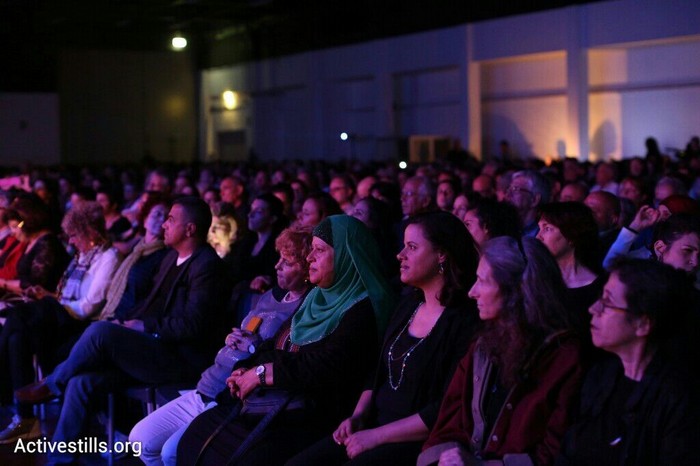 “I am not really sure why this is happening, maybe in light of the security situation, or perhaps it stems from the fear of giving peace organizations entry permits, because who knows what may happen,” jokes Mazen Faraj, the Palestinian general manager of the Parents Circle-Families Forum, who has been entering Israel for the past 10 years and lives in Dheishe refugee camp near Bethlehem. “In my opinion it needs to be the exact opposite: the work of these organizations only helps bring about the end of the conflict, getting to know one another and reconciliation, rather than ignoring reality.”

In addition to the ongoing crisis, these organizations are beginning to prepare for the yearly alternative Israeli-Palestinian Memorial Day, which has taken place in Tel Aviv for the past 11 years. Activists fear that the new policy may end up harming the event. Last year, the Samaria Settler Council tried to cancel the event and called on Defense Minister Ya’alon to rescind entry permits from all Palestinians who were scheduled to take part. “Every year we have trouble bringing people in, and we end up getting only half of the permits we need for the 150 invitees from the West Bank,” says Ben Assa. “Now that things have fundamentally changed, I have no idea what will happen.”