The Israeli army is sending text messages to mobile phones in Gaza with a warning in Arabic: “The next phase is on the way. Stay away from Hamas elements.” 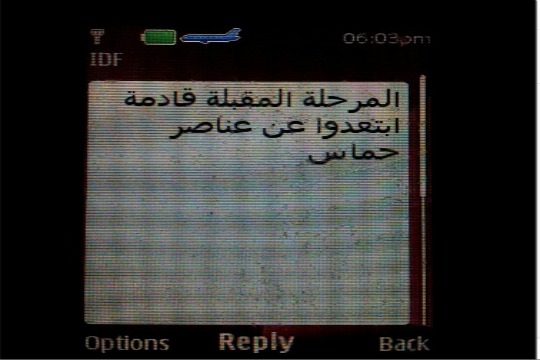 During the 2008-9 Israeli military assault on Gaza, the army sent thousands of similar messages to mobile phones in Gaza. But according to several friends and acquaintances who were there, the messages were often either false alarms or designed to sow panic. “What do you do if you receive a message warning you to go a safer place if you are already in the safest place in Gaza, or if you have nowhere to hide?” one friend asked rhetorically.

This same woman — a journalist — said that often the text messages would warn of impending bombardments that did not happen, in a sick version of The Boy Who Cried Wolf.