Nidal Eshtayeh says he was standing away from protesters when Israeli troops shot a rubber-coated steel bullet at his eye. Two IDF officers were recently convicted for assaulting Israeli and Palestinian journalists. 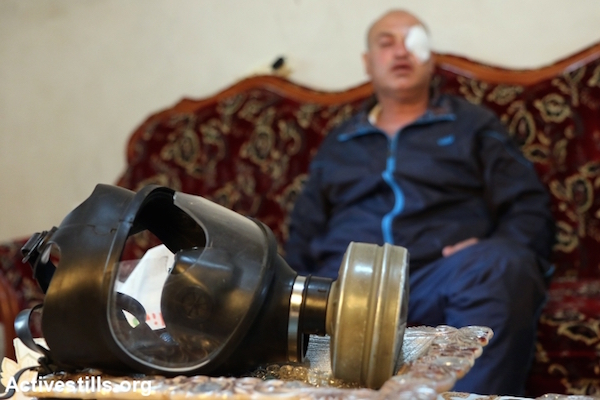 Palestinian photojournalist Nidal Eshtiyeh displays his gas mask at his home in the village of Salem, West Bank, May 16, 2015. A rubber bullet fired by Israeli troops at a Nakba Day protest near Nablus struck the glass of his mask, which shattered and wounded his eye. (Ahmad Al-Bazz/Activestills.org)

Israeli soldiers shot a Palestinian photojournalist in the eye with a rubber-coated steel bullet on Saturday.

“It was a quiet protest — no rocks, and it was just starting,” Eshtayeh explained.

There were around 200 protesters, and 20 or so journalists were standing some distance from them, he recalled, adding that all of the journalists had cameras and equipment that made them easily identifiable as journalists.

“The soldiers don’t differentiate between protesters and photographers and they just shot at us,” Eshtayeh continued. “A foreign journalist was lightly wounded and they shot a rubber bullet that hit my gas mask.”

The glass from the gas mask’s visor shattered and penetrated Eshtayeh’s eye. He was brought to a hospital in Nablus. He was released later on Sunday. Eshtayeh says that doctors told him they would only be able to give him a prognosis in a couple of days. 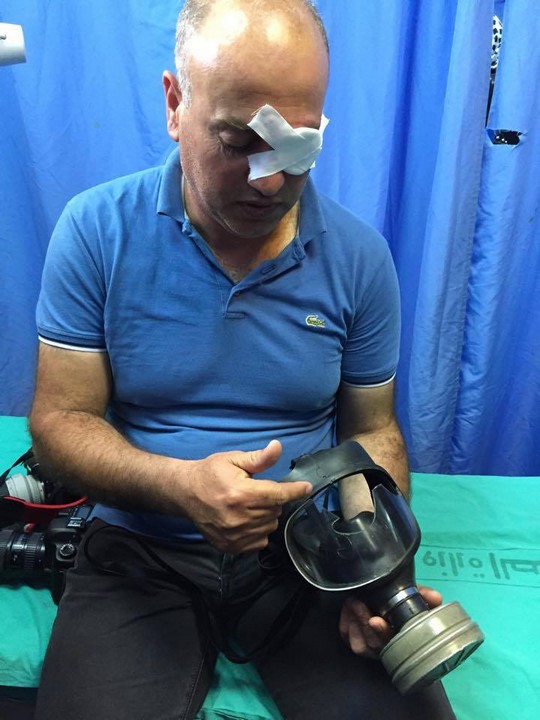 Palestinian photojournalist Nidal Ashtiyeh examines his gas mask at a Nablus Hospital. An Israeli rubber bullet struck the glass of his mask, which shattered and wounded his eye, May 16, 2015. (Photo: Ahmad Talat Hassan)

The IDF Spokesperson did not respond to a request for comment.

This was not the first time Nidal Eshtayeh has been attacked by Israeli soldiers. A few weeks ago he was struck by a tear gas canister fired at him during another protest in the area.

In August 2013, IDF soldiers attacked Ashtiyeh and stole his cameras, and handed them over to Jewish settlers who proceeded to smash them and take the memory cards. Through a lawyer, he recently received compensation for his damaged equipment, Haaretz reported. The soldiers who attacked him have not been charged.

+972 published exclusive video showing two Israeli army officers kicking, tackling and throwing stones at two photojournalists — an Israeli and a Palestinian — at a protest in the West Bank village of Nabi Saleh. As a result of the footage published here and on our Hebrew site, Local Call, the two officers were convicted in a brigade-level disciplinary procedure; one of them was sentenced to two weeks in prison.

Taken together, the cases indicate a possible pattern of soldiers attacking journalists in the West Bank, a phenomenon the military has failed to seriously address.

“They’re aiming at journalists,” said Atty. Eitay Mack. “[Soldiers] have been shooting a lot more Palestinian photographers in the West Bank lately, and time after time, [the shooters] are not put on trial.”