During Operation Protective Edge the IDF has shot thousands of artillery shells into Gaza, the impact location of which are uncontrollable. As an ex-combat soldier in the artillery corps, I feel obligated to explain how artillery fire on a civilian population can be both dangerous and lethal.

Amid the stream of terrible reports from Operation Protective Edge, two especially painful events captured my attention: The bombardment of an UNRWA school in Jabaliya that served as a shelter for families that had fled their homes due to the fighting, which resulted in the deaths of at least 20 people and injured dozens more; and the bombardment of a crowded market in Shejaiya that killed 17 people and injured roughly 160.

During my military service in the Israeli army I served in the artillery corps, and thus learned a thing or two about using shells. From the testimonies I have read and heard from the school and the marketplace bombardment, I am not sure if these were mortar or artillery shells that struck, but what’s clear from the photos and reports published by the IDF is that there was massive use of artillery fire. Artillery fire is statistical fire. It is the absolute opposite of precise sniper fire. The power of the sniper lies in the accuracy that his weapon provides him, while the power of the artillery shells being used in Gaza is based on both the extent and possibility of causing damage (impact). 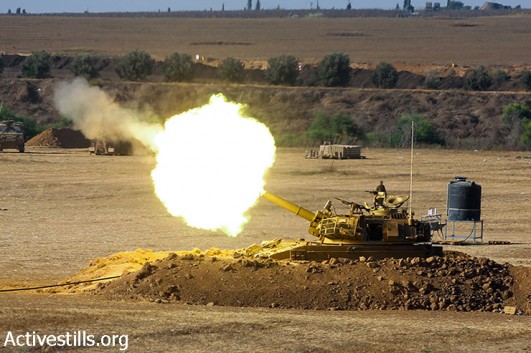 As someone who served as a combat soldier in the IDF I feel obligated to explain what is behind the numbers we hear about regarding the military operation in Gaza. A standard high-explosive shell weighs about 40 kg and is nothing but a large fragmentation grenade, which, at the time of explosion, is meant to kill everyone within a 50-meter radius and injure people located in an additional radius of 100 meters. It is impossible to aim the shells in an accurate manner and they are not meant to hit specific targets. Different factors such as the humidity of the air, the amount of heat in the barrel and the direction of the wind may determine whether the shell falls 30 or even 100 meters from the spot at which it was aimed. For that reason, a multi-barrel artillery battery fires a barrage of shells in a certain direction knowing that statistics will work their course, and that due to the scatter and the amount of damage caused by many shells, the target will indeed be hit.

There’s no way of knowing who is hit.

As a result of the inaccuracy of this weapon, the safety ranges used during war require us to aim at least 250 meters away from our troops while they are behind cover. In 2006 when the IDF first fired artillery shells into Gaza, I was surprised by the choice to use such an inaccurate weapon in such a densely populated region.

At the time, firing guidelines were changed so that the safety distance from Palestinian houses was reduced from 300 meters to 100 meters. Shortly thereafter, a shell hit the house of the Ghaben family in Beit Lahiya, killing 9-year-old Hadil and injuring 12 of her family members. Following the incident and several others related to artillery fire, human rights organizations appealed to the Israeli High Court to stop this lethal practice. In response, Israel stated that artillery fire would no longer be used in the Gaza Strip.

Only three years later, in Operation Cast Lead, artillery fire was used once again, even more extensively than before. Nowadays, since the launch of Operation Protective Edge, the IDF has already shot thousands of artillery shells at different parts of the Gaza Strip. The shells have caused unbearable damage to human life and tremendous destruction to infrastructure, the full scale of which will only be revealed when the fighting is over. 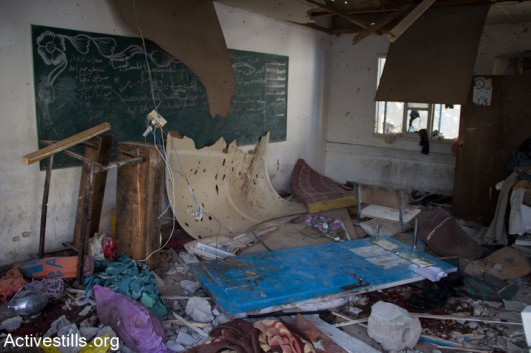 A classroom lies damaged following the overnight Israeli shelling of an UNRWA school where some 3,300 Palestinians were seeking shelter, Jabaliya, Gaza Strip, July 30, 2014. At least 20 people were killed in the attack which injured more than 100. (Basel Yazouri/Activestills.org)

In some of the cases during this round of violence, the IDF notified the civilian population that it was going to attack a certain region and instructed people to evacuate the area. Announcements such as these and firing on densely populated neighborhoods has reportedly displaced one-third of Gaza’s population in recent weeks. The families hit in the UNRWA school attack in Jabaliya are one such example.

I write this with great sorrow: great sorrow for the civilians who were hurt on both sides, great sorrow for our soldiers who died in the operation, and sorrow for the future of my country and of the entire region. I know that right now soldiers like myself are firing shells into Gaza, and they have no way of knowing who or what they’ll hit. The statistics that this type of fire relies upon maintain that in a densely populated region innocent civilians will be harmed. As a soldier and as an Israeli citizen, I feel obligated to ask: Have we not crossed a line?

Today, when the number of Palestinian casualties has climbed above 1,800 men, women and children – most of whom are innocent civilians – it is time to say in plain language: The use of a statistical weapon is like a game of Russian roulette. Those who use artillery weapons in Gaza cannot honestly say that they are doing all they can to avoid harming innocent civilians.

Idan Barir served in the artillery corps during the Second Intifada. Today he is a Ph.D candidate in history, and an activist with Breaking the Silence.

Related:
Gaza ground invasion: Shedding the pretense of ‘precision’
Scenes of devastation from deadliest day in Gaza
What Israel’s precision bombing of Gaza looks like