A female IDF soldier who is often stationed at checkpoints is apparently very disturbed by the fact that some Jews and Palestinians actually hang out. The soldier turned anonymously (on Facebook) to Yad La’achim a religious organization whose mandate is to “save Jews from assimilation,” in the hopes they can help her prevent this from happening in the future by talking some sense into these young women. As she wrote to them:

Hi, I speak with true pain, as a soldier working at checkpoints and every Friday night Jewish girls pass through in minority cars [common euphemism for Arabs]. I would be glad if you could come and stand with me at the checkpoint for at least an hour and try to appeal to the hearts of these poor Jewish girls… Every time I see such Jewish girls, I try to hold up the vehicle and check the background of these Arabs [euphemism gone], and in between I take the Jewish girls aside for a short talk (which doesn’t always help). So perhaps you will succeed, because it’s really painful to see the daughters of Israel going with these Arabs.

God willing, we have contacted the charming soldier and from now on she will report to us on every such girl, after she checks her ID. 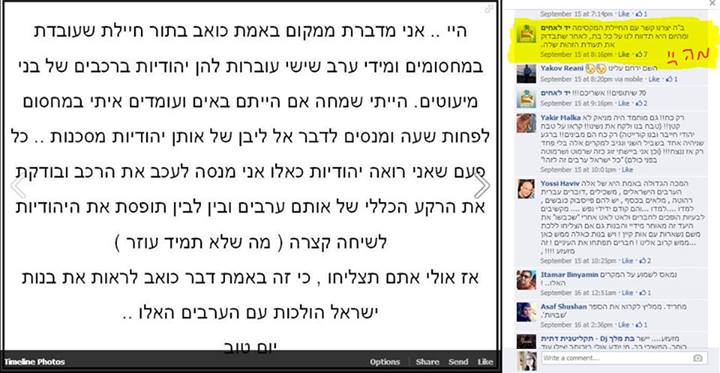