If you seek to obtain a truly comprehensive picture of the state of press freedom and freedom of expression in territories under Israeli control, come watch Israeli soldiers shoot at journalists in the West Bank.

On Friday, 29 July, at the start of the weekly Palestinian demonstration in the West Bank village of Nabi Saleh, Israeli army infantry reservists opened fire with riot-control weapons on a group of some 10 press photographers. 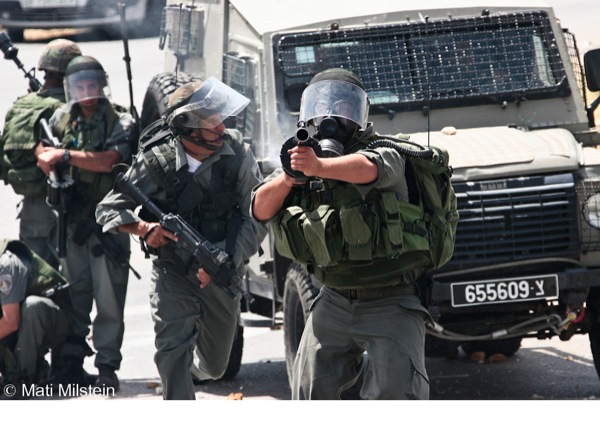 This attack crossed a red line.

The troops had just repelled a march of several dozen Palestinian, Israeli and foreign protesters with a few rounds of tear gas grenades and forced them back towards the village’s central square and out of view. The only individuals on the street visible to the soldiers at this time were photographers. They carried multiple still and video cameras and tripods and they wore unique blue flak jackets and helmets marked with “PRESS” or “TV.” The distance between the journalists and soldiers was less than 100 meters and visibility was clear.

Photojournalists working in the West Bank are used to being caught in the cross-fire, and are sometimes hit by rocks thrown by Palestinians or by various types of ammunition fired by Israeli troops. This is part and parcel of the job and rarely does anyone make an issue of it.

This is the first time I am speaking publicly about any perceived abuse of the media by any side involved in this conflict.

When once punched in the face by a Fatah activist a number of years back, I kept my cool and simply resumed working. I also kept my mouth shut earlier in July, when a Border Police officer in Nabi Saleh fired a tear gas grenade directly at me, hitting my camera and left hand at a time when I stood alone in the street while Palestinian protesters were located behind the rise of a hill at a distance of several hundred meters.

But here is the difference: the attack of 29 July was intentional and sustained and the troops were fully aware of what they were doing. I had never before come under a sustained, direct and intentional attack by an Israeli military force aimed directly at me and at fellow journalists.

Following the barrage of gas grenades that afternoon, I walked down the street towards the Israeli forces and demanded to know why they had opened fire for a sustained period of time on a large group of clearly-marked journalists. In response, officers from the Alexandroni Brigade threatened me with arrest and demanded I stand against a wall, preventing me from carrying out my duties as a press photographer.

Other television and still photographers were also sequestered – under threat of arrest – to a location behind military lines from which it was virtually impossible to photograph the events.

The use of firearms in a direct attack on members of the media was preceded slightly earlier in the day by the harassment, arrest and reported beating by Alexandroni Brigade reservists of Muheeb Barghouthi, a Palestinian photographer working for Al-Hayat Al-Jadida newspaper. I did not witness this incident, but I saw the harassment and arrest later on video (below):

I have been working in Nabi Saleh for more than one-and-a-half years. I have seen different military units rotate in and out and I have observed the varying approaches to dealing with the weekly protests taken by different army and Border Police commanders in the village.

In early 2011, the overall nature of military activity in the village started to change:

In an effort to deal with the continuing demonstrations, the IDF’s Central Command began to issue orders on an almost weekly basis declaring Nabi Saleh a closed military zone. This order is designed to prevent Palestinian and other activists from reinforcing local resident protesters and it also allows the military to control press coverage by blocking the media’s entry into the village.

With press cameras out of the way, army and Border Police forces operating in Nabi Saleh began to employ increasingly violent tactics against protesters and local residents – both during the weekly demonstrations and in arrest raids and incursions during the course of the week.

Incidents of physical and verbal intimidation of journalists by Border Police officers in Nabi Saleh have occurred periodically over the past 18 or so months, but a red line was crossed at the end of July when Israeli troops deliberately targeted media personnel with firearms.

Further, the IDF’s ongoing decision to declare Nabi Saleh a closed military zone on a weekly basis is a clear and unjustified move to suppress press freedom.

In the past, even when orders declared Nabi Saleh a closed military zone, commanders operating in the village have largely adhered to an unspoken agreement with the media: while not granting journalists easy entry into the village, accredited members of the press who did manage to infiltrate Nabi Saleh were largely ignored by troops and allowed to work freely and without restriction – as should be the case in any democratic state.

Last Friday, Alexandroni officers brutally and arbitrarily eliminated the possibility of relatively free and uncensored media coverage. As their use of tactically-unjustified violence increased, they chose to take steps to reduce the number of potential witnesses to their actions.

This move was designed with just one goal in mind: to block press coverage and allow Israeli troops free rein in the village without fear of witnesses and potential repercussions.

Blocked from entry by Israeli military order, under threat of arrest and direct physical attack, many journalists now choose not to risk covering events in Nabi Saleh. Attacks on the media lead to the media’s departure, which creates a vacuum in which military attacks on local villagers, protesters and “citizen journalists” flourish unhindered.

The Israeli military is blurring the lines between its declared “enemy” – in this case, Palestinian protesters – and the media, with the latter increasingly being categorized with the former. As we saw in the 29 July attack, this blurring is evolving from one of theoretical perception into what can be violent physical actions in the field. In other words, in the eyes of soldiers, journalists become targets as “legitimate” as are Palestinian protesters and may be dealt with in kind.

Why are orders declaring Nabi Saleh a closed military zone unjustified and unethical?

It is a contradiction of Israeli court rulings for the IDF to preemptively declare X village a closed military zone based solely on the assumption there might be violence there.

The Israeli High Court of Justice (MK Yitzhak Levy vs. State of Israel, 6893/05) ruled that the IDF may issue an order declaring a closed military zone only “in a location in which exists a near certainty that the actualization of the right [to gather or protest – M.M.] is liable to lead to harsh, serious and severe harm to public safety and the enforcement of public order.”

A military commander may declare a closed military zone based not just on the assumption that there will be riots, but rather that these riots will cause severe harm to public safety.

To preemptively prevent individuals from participating in the Nabi Saleh protests by blocking off the village is like a court assuming that a man may possibly commit an act of rape upon leaving his house and thus ruling that he may not ever leave his house.

The brutal decisions and actions taken by Israeli military forces in Nabi Saleh are a violation of Israeli court rulings and run contrary to the standards of a democratic state that claims to promote transparency and allow freedom of expression and freedom of the press.

The crossing of this red line sets a dangerous precedent.

NOTE: Formal complaints regarding the events in Nabi Saleh on 29 July will be filed presently with the Israeli Government Press Office, the Foreign Press Association in Israel and the IDF’s Spokesperson Unit. Mati Milstein’s photography and writing appeared in Haaretz, The Jerusalem Post, Daily Mirror, National Geographic News, The Forward and other publications.