Israeli soldiers fire illumination flares, at a direct trajectory, at stone-throwers along the Gaza border. A 15-year-old boy is killed. The IDF says it’s conducting an ‘inquiry.’ 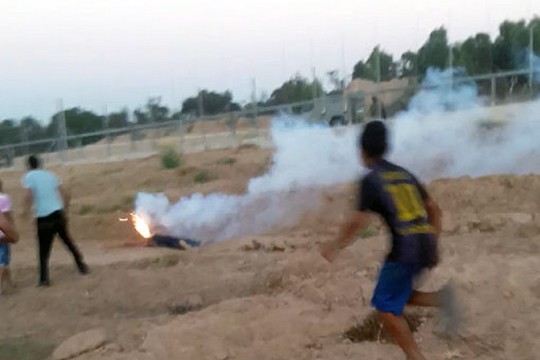 Israeli soldiers killed a Palestinian teenager by shooting a military-grade illumination flare directly at him, shattering and setting his face on fire last month, according to investigations by B’Tselem, Defence of Children International — Palestine (DCI), and video footage seen by +972 Magazine.

The killing took place on September 9, when a group of roughly 100 Palestinian youths staged a demonstration near the border fence with Israel, east of al-Bureij Refugee Camp in the Gaza Strip. Some of the protesters threw stones toward the Israeli soldiers and attempted to cut the barbed wire near the fence. The soldiers initially responded with tear gas and rubber-coated steel bullets.

Video shot at the scene, which we are unable to publish here, shows that the soldiers do not appear to be in any sort of danger. The soldiers stood on the other side of the fence, some dodging the occasional stone while others sat inside armored vehicles that were entirely unaffected by the stones.

Quite unusually, however, at some point the soldiers also fired illumination flares, which were fired toward the protesters in an attempt to disperse the demonstration.

Illumination flares are used by some military units to to illuminate large areas during nighttime military operations, or in order to mark targets. They are shot out of a rifle-mounted launcher at a high trajectory, and a small parachute deploys as the flare itself illuminates the ground below for less than a minute.

Illumination flares are not intended for firing at a direct trajectory, or to for use as a weapon or crowd dispersal tactic. It is highly unusual to see them used against people.

In this case, however, the video clearly shows that the illumination flares were shot directly at the protesters, despite the fact that the minor clashes were taking place in the light of day. In one of the video clips, the flare can be seen burning for a short period, after which the Palestinian youths pick it up while the parachute is still attached.

It was exactly that type of flare that appears to have been fired directly at the face of 15-year-old Abdel-Rahman al-Dabbagh. In the video (a screenshot of which appears above), al-Dabbagh is seen lying on the ground with smoke and fire streaming from his face, and then the burning stops suddenly, in a moment, just like the illumination flares extinguish. Al-Dabbagh’s friends are then seen carrying away his body, which shows signs of serious wounds and burns on his face. 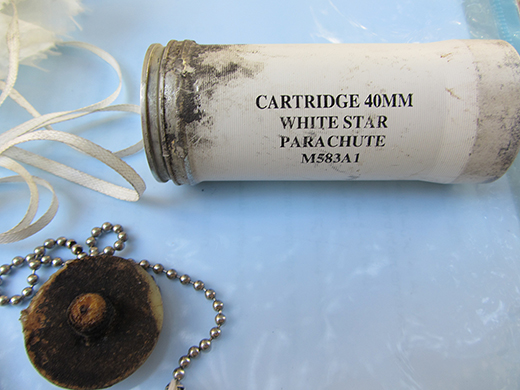 The flare bomb that the soldier fired at al-Dabbagh, killing him. Photo by Khaled al-‘Azayzeh, B’Tselem, September 29, 2016.

According to testimonies of others who were there that day, collected by DCI-Palestine and B’Tselem, the incident took place around 7 p.m., as the sun was just beginning to set. In the video there appears to be plenty of light out, such that the use of a flare would be unnecessary.

An autopsy later performed on al-Dabbagh determined that the flare shot at his face was the cause of death, according to B’Tselem.

A 31-year-old resident of Deir al-Balah Refugee Camp who was at the protest, relayed the following to a B’Tselem field worker in Gaza:

The soldiers fired two flare bombs directly at us. The bombs hit the fence and started a fire. Shortly after 7:00 p.m., a soldier took a few steps and came up to the fence, put the barrel of his rifle through it and fired a flare bomb straight at ‘Abd a-Rahman. The bomb hit his head. He immediately fell to the ground and his face kept on burning.

I came up to him quickly, but one of the soldiers told me in Arabic: “Get back or I’ll shoot you.” I told him I just wanted to lift him up. I took two steps toward ‘Abd a-Rahman, and the soldier shot a few bullets at my legs. I stopped. Then, the soldier turned on his gun’s laser sight and put it on me. Once the fire on ‘Abd a-Rahman’s face went out, the soldiers let us go to him. His face was burnt and he was bleeding. He was unconscious and didn’t move. I yelled, asking for help from the guys, and they came and lifted him up.

According to B’Tselem, Abdel-Rahman al-Dabbagh was the 20th person to be killed during protests against the fence on the Gaza border since they began taking place regularly in October 2015.

At the request of Defence of Children International — Palestine, which provided the video, due to restrictions imposed by Israeli law, and because they could be used to identify minors throwing stones, we have decided not to publish the videos here. However, after viewing the full video footage, +972 can confirm the findings of DCI and B’Tselem.

The IDF Spokesperson responded that on the day in question, “there was violent rioting with dozens of suspects along the fence. During the riots, burning tires were rolled and stones thrown with the aim of harming IDF troops. Following an inquiry [carried out by] commanders in the field, it was determined that IDF soldiers used crowd dispersal means in order to distance the rioters and to prevent harm to the troops and the fence. In light of reports regarding a Palestinian youth who was killed during the course of the disturbances, we will carry out an inquiry into the circumstances of the incident.”

The IDF Spokesperson did not respond to our specific question about the use of illumination flares as a weapon. Likewise, the spokesperson did not respond to our question about whether a Military Police investigation has been opened into the killing of Abdel-Rahman al-Dabbagh. Follow-up questions on the outcome of the “inquiry” and use of illumination flares were left unanswered at the time of publication.