Two IDF soldiers shot Samir Awad from behind eight times in January 2013, killing him. Nearly four years and a string of investigative failures later, it looks unlikely that either of the accused will go to jail. 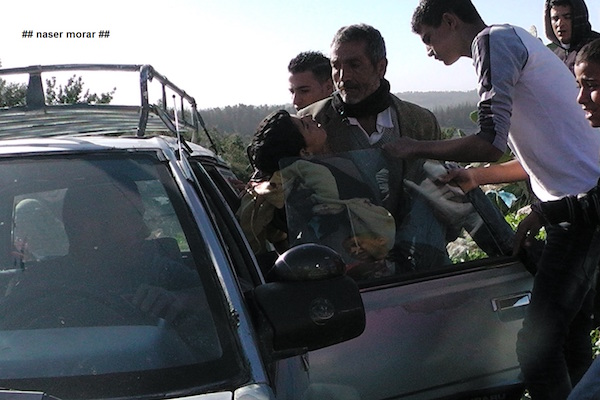 In January 2013, Israeli soldiers killed Palestinian teen Samir Awad in the West Bank village of Budrus, after shooting him eight times from behind. The shooters, A. and B. — a commander and a soldier — were indicted last January, three years after the killing, on charges of “recklessness and negligence.” The names of the accused are barred from publication.

At a hearing last November, the state prosecutor proposed a compromise of three months’ community service for the two soldiers, along with a conditional sentence and damages payable to Awad’s family. The proposal was made with the intention of seeing off any potential future civil lawsuit from the teen’s relatives. The defense rejected the offer, demanding that the two soldiers escape conviction altogether.

Although the proposed punishment is minimal given nature of the incident, it is surprising that the indictment stage was reached at all, given the attempts of the IDF’s investigative and prosecutorial authorities to try and undermine the inquiry.

In prior hearings, the defendants’ attorneys had declared that should the trial go ahead, the soldiers would claim that the law was being selectively enforced against them, by arguing that the IDF tends not to prosecute soldiers who have killed Palestinians.

The two defense attorneys have both previously served with the IDF’s Military Advocate General, and are well-versed in how the army enforces its own rules. They are, of course, correct: the case in question is being handled differently from dozens of others involving the killing of Palestinians – some even more serious than Awad’s death — in which no indictments were submitted. During the trial this year of Hebron shooter Elor Azaria, for example, former IDF general Uzi Dayan recounted how he had whitewashed the killing of three innocent Palestinians. There are numerous examples of other cases that the attorneys could have presented to support the claim that their clients were the victims of selective law enforcement.

The indictment states that at around 3.30am on January 16, the IDF set up an ambush of six soldiers near the separation barrier in Budrus, in order to stop any youths who might come to throw stones at the fence. The barrier, which runs through land belonging to the village, consists of rolls of barbed wire, a primary fence, a dirt road, and a secondary fence, which is electrified and touch-sensitive. The soldiers were split up into three pairs. One of the pairs, which included the accused soldier B., was stationed next to a breach in the first fence. The remaining two pairs lined up along the path.

At 10.06am, more than six hours after the ambush was set up, several teenagers approached the fence. One of them, Samir Awad, crossed through the breach in the barrier. The two soldiers who had been lying in wait revealed themselves and blocked Awad’s path back. The teen started trying to escape back to the village via a different route, and B. shot into the air three times.

With the route back through the gap in the fence blocked, Awad was forced to try and jump over the first fence, but fell and got tangled up in the barbed wire. At the same time, the remaining two pairs of soldiers revealed themselves and started to chase after Awad. According to the indictment, B. trained his gun on Awad and shot twice from a distance of a few meters, while the teen was still caught in the barbed wire. Awad nonetheless managed to disentangle himself and run away, despite having a bullet wound in his thigh.

The indictment recounts that as Awad was escaping, A. also fired his gun three times: once to the side of the fleeing teenager, and twice at his legs. At the same time, B. shot another five bullets, this time without looking through his gun sights, according to the indictment. One of the bullets hit Awad in the back; another struck him in the back of the head. It was this wound that killed him.

The contents of the IDF’s preliminary investigations immediately following the incident were exposed as lies. The group of soldiers concerned claimed that they had not initially fired live ammunition, but had rather used crowd dispersal measures against stone throwers — even though no stones had been thrown. After it became known that Awad was dead, this version of events was changed, with the soldiers instead saying that they had fired live bullets as warning shots (i.e. they hadn’t shot in anyone’s direction), and that Awad fell and injured himself. Then, when the pathology results made clear that Awad had been shot, the soldiers changed their story again, claiming that he had posed a threat to their lives. 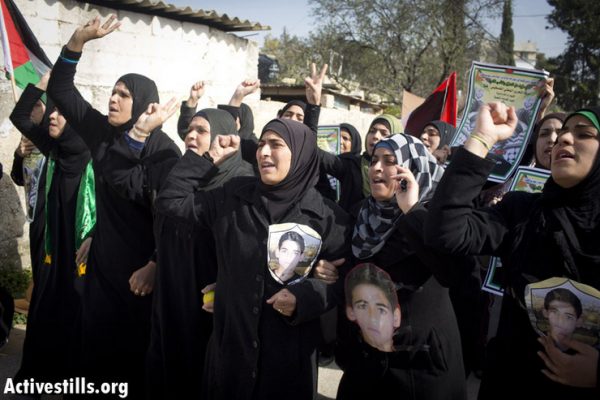 Palestinian women holding pictures of Samir Awad, during a protest against the occupation, Budrus, January 18, 2013. (Oren Ziv/Activestills.org) Awad had been shot and killed three days earlier by IDF soldiers.

How much is a Palestinian teenager’s life worth?

According to the indictment, every bullet shot towards Samir Awad was fired contrary to orders, implying that the claim he was endangering the soldiers’ lives was false. Yet despite the killing clearly being unjustified, the district prosecutor submitted an indictment on charges of “recklessness and negligence,” after a delay of nearly three years.

The prosecutor claimed that the military police investigation had failed to assess which of the two accused soldiers had fired the lethal round; although both of them had shot Awad, it’s unclear whose bullet hit him in the back of the head. The investigative authorities failed to find the bullet in question, and were therefore unable to match it to the weapon it had been fired from. Consequently, no one could be charged with lethal use of fire.

Although this legal claim is reasonable in principle, it’s difficult to imagine that a deal of three months’ community service would have been offered to two shooters who were not soldiers, and who had killed a teenager by shooting him in the back of the head after already having injured him. It’s also difficult to imagine that an investigative body other than the military police would have displayed such negligence and failed to find the deadly bullet.

Moreover, the IDF possesses footage of the incident, but has not allowed anyone outside the army to view it. Although it may be difficult to determine who fired the bullet that killed Awad, a thorough examination of the footage could nonetheless point to who was responsible.

It was reported last week that a plea bargain is about to be signed in the case of Ben Deri, the Border Police officer on trial for the May 2014 killing of Nadim Nawara in the West Bank town of Beitunia. Under the terms of the deal, the former officer will be charged with causing death by negligence rather than manslaughter. Deri’s punishment is likely to be symbolic, perhaps even just community service.

These two cases demonstrate what everyone knows: that Israel’s investigative and prosecutorial authorities are incapable of dealing with criminal acts committed by IDF soldiers, in particular when they have killed Palestinian youths. Only a minority of cases come to trial; within those, community service, and sometimes even less, is given in exchange for the lives of teenagers. The authorities are effectively collaborating in the killing of innocents and the military repression of the Palestinian population.