An IDF spokesman giving a radio interview casually admits  the army’s bias in treating settler pogromchiks and Palestinians protesters in diametrically different ways Gotta hand it to the IDF. We could never have high-lighted its apartheid policy better. Monday night, three days after the killing of Mustafa Tamimi – who was killed by a 40mm grenade to the face by a soldier sitting in an armored vehicle – several young settler hoodlums tried to forcibly cross the border to Jordan, in order to create an outpost there. Ha’Kol Hayehudi, Israel’s equivalent of Radio Rwanda, claimed their purpose was to remind us all that Jordan, too, is a part of Israel. Others said this was retaliation for Jordan’s participation in the crisis over a bridge near the Western Wall. Such an infiltration, if successful, could be considered to be a casus belli. The rioters managed to cross the security perimeter near the border, when surprised IDF troops managed to encircle them. At this point, an IDF Spokesman soldier told me last night, the brigade commander informed the rioters that “they won’t make it to Jordan tonight”, and that he was trying to convince them to go home. I asked whether this was a negotiation; The soldier preferred to term it ambiguously as “dialogue”. I asked why, come to think of it, they aren’t in cuffs already. He didn’t understand the question. I repeated it: After all, they are in a closed military zone and have attempted to penetrate the border. Why aren’t they in cuffs? We don’t do arrests, he said. That’s not our department. Speak to the police. I have seen with my own eyes people arrested and cuffed for the crime of entering a closed military zone. I have listened as a major explained patiently that the army has declared the entire village of Al Ma’asara such a zone. I have seen the detainees being hooded and forced into military vehicle. Somehow, when it comes to right wing rioters in the West Bank, that doesn’t happen. Hours later, some arrests were made – presumably the police showed up. Actually, we have some experience with IDF rules of engagement when it comes to unarmed demonstrators trying to cross a border. You just have to ask the Lebanese and Syrians, who overran the fences in the Golan Heights or attempted to get near the border with Lebanon, how the IDF treated them. A hint: The local brigade commander didn’t waste time on attempting “dialogue” with them. Another incident Monday took away most of the attention from the Jordanian border incident. A large number (some 300, we’re told) of yarmulke-wearing pogromchiks stoned Palestinian vehicles, stormed a military base, caused severe damage to equipment there, stoned a brigade commander and his XO – the stones were thrown into their command vehicle, no less – and managed to get away with it without any pogromchik being shot in the face by a gas grenade. Actually, the IDF only managed to detain one of them. When military reporter Carmela Menashe asked the IDF Spokesman, Brigadier Yoav Mordechai, this morning how the brigade commander would react of he was stoned by a Palestinian, Mordechai answered (Hebrew recording, circa 12:00) that “I assume, Carmela, that you wouldn’t expect the brigade commander to open fire on a Jew standing in front of him, I am certain you didn’t mean that.” 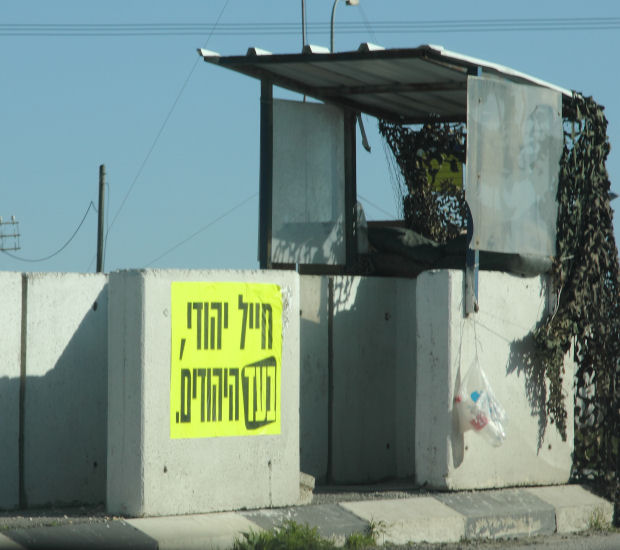 And there you have it. The IDF’s official spokesman defines the apartheid regime in the West Bank. There are stone-throwers who may be shot, and there are some, those of the Chosen People, who can’t be. Same offence, same region, different reaction. I wrote yesterday in my Hebrew blog that the IDF has metamorphosed into a gang of frightened gunmen, but the main problem is the cowardly officers leading them. Oh, they don’t lack for physical bravery; they’ll charge a machine gun nest without thinking twice (the fact that the IDF is familiar with only maneuver, the charge, is a problem for another post). But they have not a shred of civic courage. They know what damage the settlers can do to their careers. They know that gang of settlers can besiege their houses and intimidate their families. So they retreat, and let the enemies of Israel win; they turn the IDF into the SSA, the Settlers’ Service Army. For decades, the IDF repeatedly claimed that it is not a political entity, and that it does “choose its own missions.” Those arguments were used against conscientious objectors from the left. But, as we see, the IDF knows perfectly well how to choose its missions: Defending lands stolen by the settlers near Nabi Saleh, while shooting the demonstrators? Sure thing, it’s our pleasure. Defending Palestinians from “price tag” pogroms? Fuggetaboutit, we’re now the Czar’s police. Defending itself from Jewish rioters? “I assume, Carmela, that you wouldn’t expect the brigade commander to open fire at a Jew standing in front of him, I am certain you didn’t mean that.” We should thank the IDF Spokesman for his frankness. We should thank him for making it clear that, like the rabbis eating it from within, it reacts to events in accordance with the blood of the people involved. If someone still had a doubt whether serving in the Settlers’ Service Army might be immoral, consider it removed. And, to quote one of my readers: The IDF Spokesman should be viewed through the same lens Arafat’s speeches were viewed – that is, we should pay attention to what it says to its own public in Hebrew, not to what it says to the world in English.