The Military Rabbinate distributes a photo showing the Temple Mount with the Dome of the Rock missing. In response to criticism, the IDF Spokesman lies for them.

The Military Rabbinate recently distributed a presentation ahead of Hanukka to soldiers, which contained a picture of the Wailing Wall square all wrapped in holy light. Yet, lo and behold, the picture is bereft of any signs of the mosques on Temple Mount. When Haaretz went knocking (Hebrew; pay attention to the photo), the IDF Spokesman replied as follows:

The questions of the reporter are ridiculous and biased, for which we are sorry. This is a presentation sent to IDF Spokesman on the occasion of Hanukka. The aforementioned slide shows an illustration image of the Jerusalem during the Second Temple Period. As the reporter was informed, the Dome of the Rock did not exist at the time. Hence there was no need for it to appear in the picture.

I don’t know how to put it to the IDF Spokesman, who was probably not all that awake during history classes, but during the Second Temple period there was a rather dominant building on Temple Mount which somehow fails to appear in this “illustration picture.” A hint: Its name contained the words “Second” and “Temple.”

An eagle-eyed reader, Sapir Peleg, noticed this is actually a photoshopped picture of the Waling Wall square as it is today, which fogged out the Dome of the Rock, a major Islamic holy site. An “illustration of Second Temple Jerusalem,” my foot. You can see the full-sized comparison here. 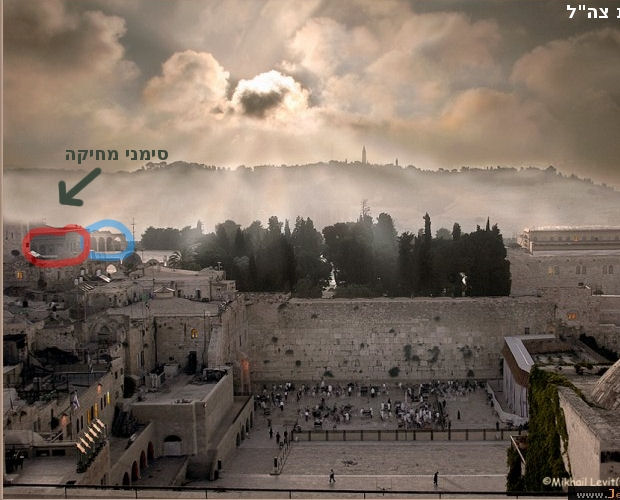 The image used by the IDF. Note erasure marks near the arrow. (Photo: Peleg Sapir)

It’s also worth mentioning that the IDF further claimed that the goal was “an illustration of the days of the Maccabees.” Alas, there was no wailing wall during that time; it was built by the Hasmoneans’ nemesis, Herod. Furthermore, even during the late Temple period, between the building of Herod’s temple (about 4 BC) and its destruction (70 AD), nobody paid it any attention. It only became important after the destruction of the Temple, as its sole relic. I am also told by military historians that the current Israeli flag wasn’t in common use at the time, yet it appears in the lower lefthand corner of the IDF Spokesman’s “illustration picture.”

So, what do we have here? Aside from the exposure of the Rabbinates’ secret wish for the eradication of the Dome of the Rock – no real surprise here – we see how the IDF Spokesman first response to any criticism is a lie. Even if the lie is clearly idiotic, even if the lie forces the Spokesman to deepen the hole it is already in. In a normal country, a spokesman – particularly one employed by the public – caught in such a colossal gaffe would be sent home. I wouldn’t hold my breath.

Update: The doctored photo was created by Michael Levit, and, as the JTA found out several years ago, was used for a short while by Christians United for Israel (CUFI), John Hagee’s outfit. Interesting, how the mind of Jewish and Christian fundamentalists work.