Despite concerns raised by the international community, the army suspends a pilot program meant to lessen the number of Palestinian children arrested in night raids. 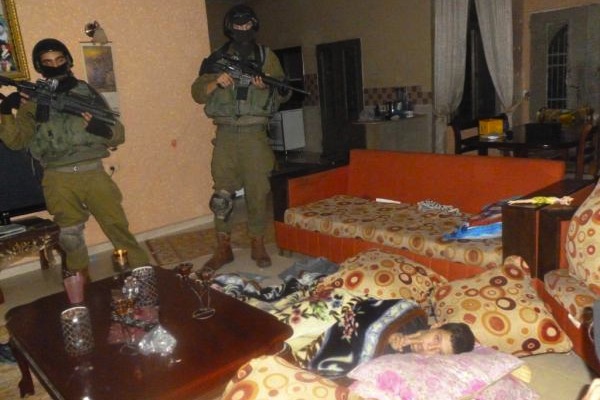 A pilot program by the Israeli army in order to lessen the number of Palestinian children arrested in nighttime raids has been suspended, according to Israel’s chief military prosecutor.

The program was announced by Israel’s military authorities in February 2014, and called for issuing written summonses instead of arresting children during night raids in the West Bank. The announcement followed concerns raised in the UK, The Netherlands and Australia about the devastating impact of repeated nighttime incursions into Palestinian communities. In 2013, UNICEF published a report that graphically described these nighttime arrests as follows:

Many of the children arrested at home wake up to the frightening sound of soldiers banging loudly on their front door and shouting instructions for the family to leave the house. For some of the children, what follows is a chaotic and frightening scene, in which furniture and windows are sometimes broken, accusations and verbal threats are shouted, and family members are forced to stand outside in their night clothes as the accused child is forcibly removed from the home and taken away with vague explanations such as ‘he is coming with us and we will return him later,’ or simply that the child is ‘wanted.’ Few children or parents are informed as to where the child is being taken, why or for how long.

On January 15, 2015, Dutch Foreign Minister Bert Koenders made a statement to the Dutch Parliament on the progress being made in implementing the pilot program. Koenders informed Parliament that on November 12, 2014, a conversation took place with Israel’s chief military prosecutor in the West Bank in which it was stated that the pilot program began in February 2014 in both the Nablus and Hebron districts.

According to data collected by Military Court Watch, there was a 5 percent reduction in the number of children arrested at night during the period in which the pilot program was operational. However, in 67 percent of cases in which summonses were issued, they were delivered by the military after midnight in a process that continues to terrify the civilian population. And despite the slight improvements brought upon by the plan, the military did not keep any statistics on the program.

The available evidence suggests that no genuine attempt has been made by the military authorities to effectively replace night arrests with summonses, and that the pilot program has not been implemented in good faith. The evidence includes the following factors:

1. Few details of the program were made public to allow for an independent assessment.

2. Although the program was launched in pilot form, military authorities now concede that no statistics were kept to enable internal or external assessment.

3. Two-thirds of the summonses were delivered at night during military raids.

4. The military official responsible for the implementation of the pilot study resides in a West Bank settlement. The evidence indicates that repeated nighttime raids by the military are an essential element in the army’s strategy of “demonstrating presence” in Palestinian villages located near settlements, and amounts to a systematic pattern of intimidation. These circumstances reveal a clear conflict of interest.

According to Koenders, the chief military prosecutor claimed the program was being suspended “due to the escalation of violence during this past summer,” but that the army still intends to “resume and expand the program.” The Israeli Prison Service, however, has been reporting an actual fall in the number of Palestinian minors held in detention since August.

In September 2014, Military Court Watch released a progress report following a review of 105 testimonies collected from children held in Israeli military custody. The report found that UNICEF’s 2013 assessment that “the ill-treatment of children who come in contact with the military detention system appears to be widespread, systematic and institutionalized throughout the process” remains valid until today.

No date for the resumption of the program has been given.

Gerard Horton is a lawyer and co-founder of Military Court Watch. Gerard has worked on the issue of children prosecuted in the Israeli military courts for the past seven years and is the author of a number of leading reports on the subject. Read this post in Hebrew (here) on our sister site, Local Call.