The shooter, who had not yet been identified at the time of this report, was still on the loose. Heavily armed police and special forces were conducting house-to-house searches in the area, a search that only expanded into the evening. 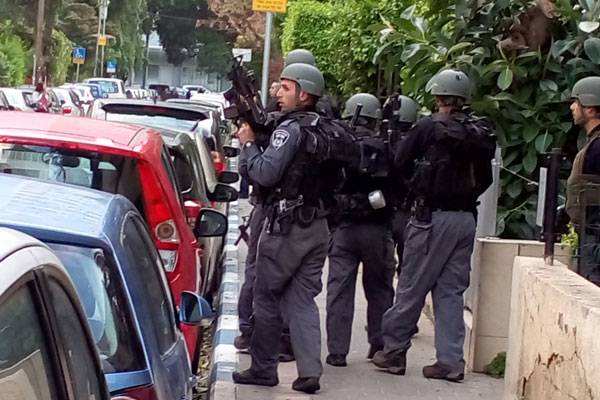 CCTV video of the shooting shows a group young people sitting close together at high bar tables as a man emerges into the frame with an automatic weapon and opens fire. Another video, filmed inside a health food store next door, shows the shooter ambling around, picking up some nuts and putting them back, and calmly pulling an automatic weapon out of his backpack, stepping outside and beginning to shoot.

Witnesses said they heard long seconds of rapid gunfire and bolted for cover.

Noga Keren, a 46-year-old investment manager for a philanthropic fund, was at the “Sidewalk” café on the corner of Dizengoff. She pointed to a wooden bench inside the glass-enclosed section of the café. A single bullet hole had pierced the glass. “I was sitting on the bench. If I hadn’t been inside, it would have been over for me,” she said. She and her companions saw a man with a weapon rush around the corner as they hit the ground, then a minute later they fled inside. “It’s a tough feeling,” she said. “you just can’t imagine yourself in a situation like this.” 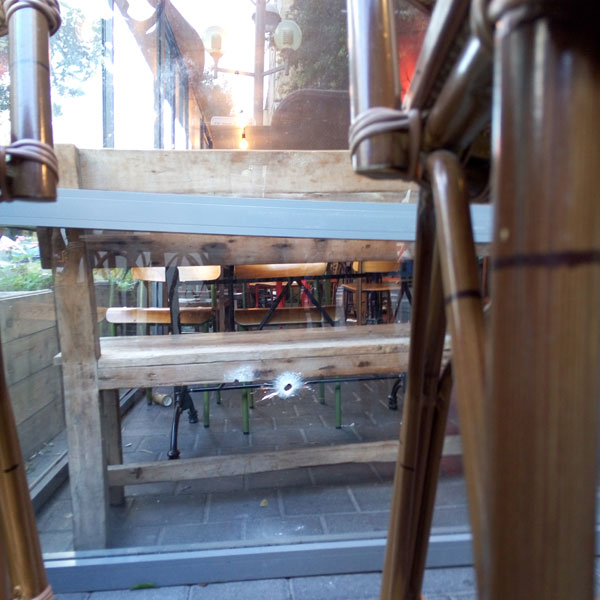 “I was sitting on the bench. If I hadn’t been inside, it would have been over for me,” Dizengoff, Tel Aviv, January 1, 2016. (Dahlia Scheindlin)

Alexandre Lambez, a 27 year old visiting from France, said he was in another nearby café when he heard the gunfire, and he was still in shock. His family moved to Bat Yam, a suburb south of Tel Aviv, three years ago and he was here for a wedding. He worried about the implications: “It looks like a dark future,” he said.

An employee in a large drugstore across the street from the shootings said the shop was full of customers, who panicked. Catching her breath as she spoke, she related: “Everyone ran downstairs to the storage room, lots of them, many of them were young girls who started to cry, they were hysterical. What could I do? I gave them water and my phone so they could call their mothers.” A customer said about 15 people took cover upstairs in the pharmaceutical section as well.

About 20 minutes after the incident, shoppers who had hidden in the drugstore were still filing out with stricken faces. Other businesses were crowded with people who had taken cover, waiting among the turmoil of police vans, convoys of public buses that had frozen along Dizengoff, medics, ambulances, crowds of onlookers and photographers. Security forces ran up and down the street, cordoning off one section after another and imploring people to step behind police tape lines. 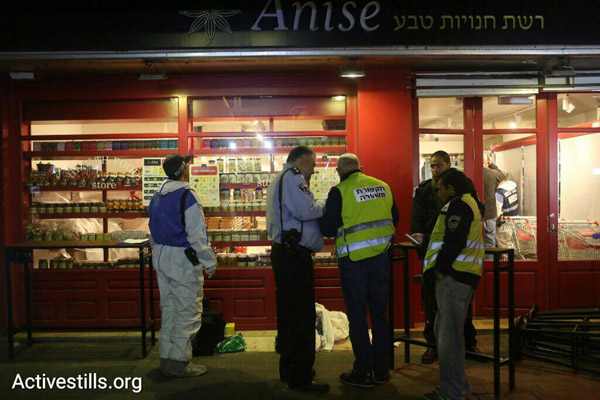 Helicopters flew overhead, marked and unmarked police vans hurtled through the small streets around Dizengoff Street, the city’s main drag as the manhunt got under way. A seige mentality set in as businesses shut down, frightened residents peered out of windows or wandered out in slippers trying to comprehend the situation, and scurried back inside. Police published numerous messages urging the public to go on with their routine as usual, however, dismissing rumors that they had ordered residents to stay indoors.

The shooter’s motive was still not known, and for hours police gave no formal indication about whether it was a criminal attack, or “nationalist” – the national term for a politically-motivated, or terror attack.

But security officials interviewed on Israeli media were inclined to treat it as terrorism, in part because the shooter did not appear to direct his fire at one specific target, as might be expected in an organized crime hit. One television reporter spoke of the influence of ISIS in the style of the attack — although a random street shooting might just as likely recall everyday incidents in the United States.

Later in the evening, Israel’s Channel 10 identified the shooter as an Arab citizen of Israel from the north of the country, adding that the man’s father turned him in to authorities when he recognized him on CCTV footage published in the media. There was no immediate confirmation of that report.

Amir Ohana, the newest Likud member of Knesset and the first openly gay lawmaker from the socially conservative party, did take a page from the U.S. gun debate and told Channel 1 that more armed citizens could have helped contain the attack. However, Haaretz quoted the owner of the bar that was hit, saying that several people on the scene carried pistols, but didn’t return fire for whatever reason. It is possible that the speed and shock left civilians, who are not trained to handle such situations, unable to react in time.

Police spokespeople and the Tel Aviv Municipality repeatedly communicated that residents can be outside but are advised to “be extra alert.” Many residents apparently wish to stay in, however, and one moviegoer told Ynet that ushers had told them to stay put after the film. However, despite the panic and buzz, a certain knowing atmosphere hung over the streets, below the heavy storm clouds and behind people’s descriptions, as if even residents of Tel Aviv – what some call a “bubble” – were not entirely surprised.