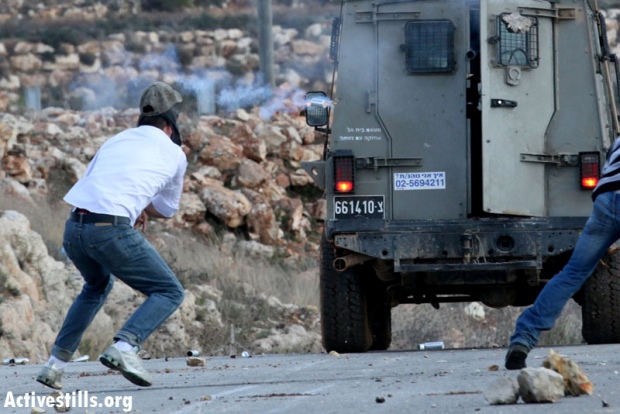 Mustafa Tamimi, 28, died this morning at Belinson Hospital [Note: Images at link are very graphic] after sustaining critical wounds yesterday in the village of Nabi Saleh when an Israeli soldier fired a tear gas canister directly at his head from a short distance.

Activestills, the only photo agency which covers protest in the West Bank on a regular basis, captured the moment of the deadly shot (above).

You can see the gun sticking out of the Jeep’s door and the canister in mid-air, a split second before it hit Tamimi [UPDATE: after further review, I believe the canister is seen here after it hit Mustafa]. It seems that the shot was done in violation of army orders; yet as we reported in the past, soldiers often don’t respect army regulations in the Occupied Territories. The pictures below show what happened after the shot.

For context on the protest in Nabi Saleh, I suggest reading this excellent post by Idan Landau. Also, take a look at this video I posted a few months ago: It shows an army unit terrorizing the villages’ people at night (IDF Spokesperson’s response given to me a week later basically confirmed there was no “military” reason for this attack).

I will post a longer commentary on IDF’s actions in Nabi Saleh tomorrow.