At a ‘Zochrot’ exhibition opening, compelling photography, first exhibited in the ‘unrecognized village’ of al-Araqib in 2012, documents home demolitions and Bedouin demonstrations against the Prawer Plan. 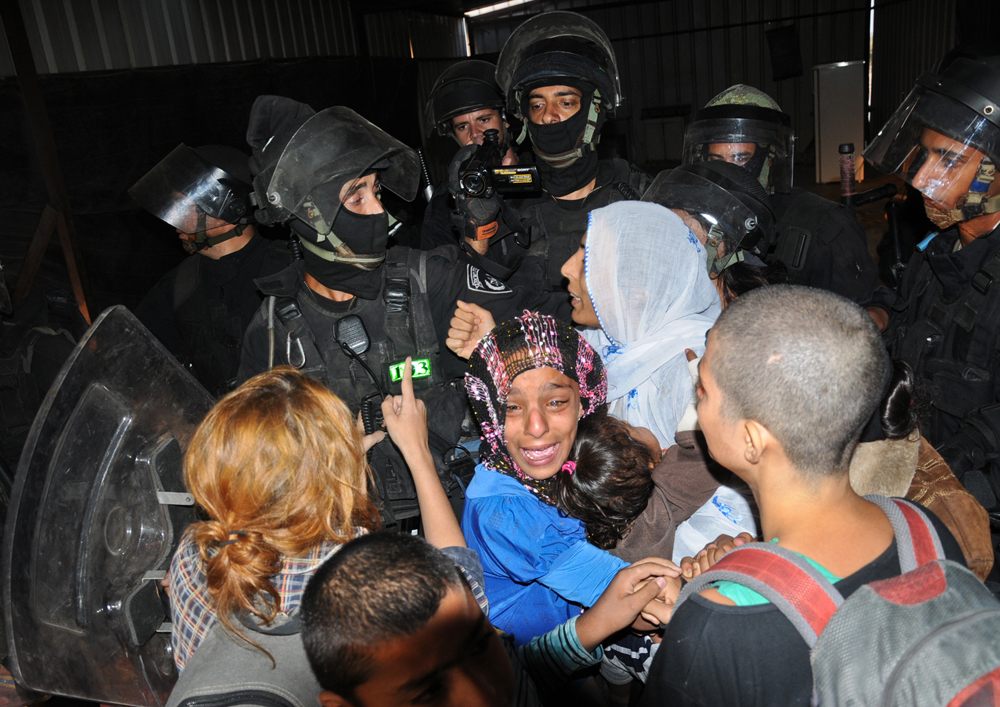 One of the biggest demolitions in al-Araqib village July 27, 2010. From “Baqon” (Photo: Aiob Abo Madegam)

The boy in the photograph is half-smiling because he saved his birds, said photographer Aiob Abo Madegam.

In the image, behind the Palestinian Bedouin boy holding a blue crate containing chickens, at least a dozen Israeli policemen in full riot gear don’t notice Madegam’s camera. Israeli authorities had just demolished the village of al-Araqib in the Negev for the first time, on July 27, 2010, including the animal pens.

This is one of 25 photographs of unrecognized villages in the Negev and their Bedouin residents taken by Madegam from 2010 to 2013, featured in his exhibition, “Baqon” (Remaining), which opened July 28 at Zochrot’s headquarters in Tel Aviv.

The photographs include portraits of demonstrators, villagers and children, some one in the same, intimate scenes of village life and intense moments of confrontation between villagers and the authorities. Madegam’s images provide public recognition to Bedouin communities in the Negev that are unrecognized by the State of Israel, and to the residents’ struggle against forced displacement.

Madegam, 23, said he shot many of the exhibition photographs in al-Araqib on the day the IDF demolished the village for the first of more than 50 times. 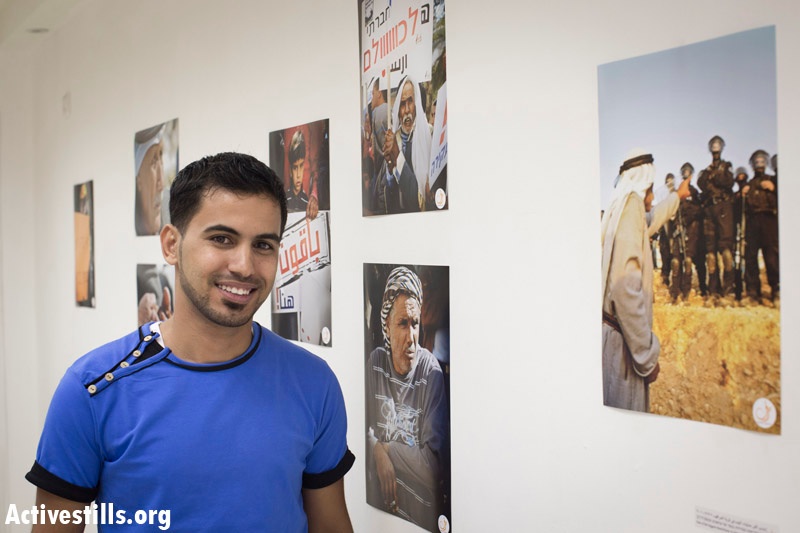 On Saturday, activists held a demonstration to commemorate the third anniversary of the first demolition of al-Araqib, where homes were most recently demolished on July 16. Protestors marched from Rahat to al-Araqib, where they shared an Iftar meal.

Madegam’s photographs were exhibited previously in Rahat, Ramallah and Beer Sheba, and will be displayed in Kafr Qara and Nazareth in coming weeks. He said he also hopes to show his work at other venues, both in Israel and abroad.

He is determined to tell others inside and outside Israel what is happening in the Negev.

“I am from the Negev and I am one of them. So I wanted to tell this story,” said Madegam, who has also helped organize protests against Israel’s Prawer Plan to forcibly relocate tens of thousands of Bedouin.

Madegam studied photography at Sapir College and started taking photos five years ago. He lives in Rahat, a planned city in the Negev, but said he has family living in al-Araqib and is concerned that demolitions and forced evictions in the Negev will spread.

“The Prawer plan wants to move people to recognized localities and give them a little more money,” Madegam told Zochrot founder Eitan Bronstein in a recent interview about the exhibition. “The inhabitants don’t agree. If that happens, for the rest of our lives we’ll be ‘mankubin,’ people who’ve suffered a Nakba.”

The Prawer Plan, which passed its first reading in the Knesset last month, would forcibly relocate approximately 30,000 Palestinian Bedouins from dozens of unrecognized villages, to allow for Israeli development on the land. 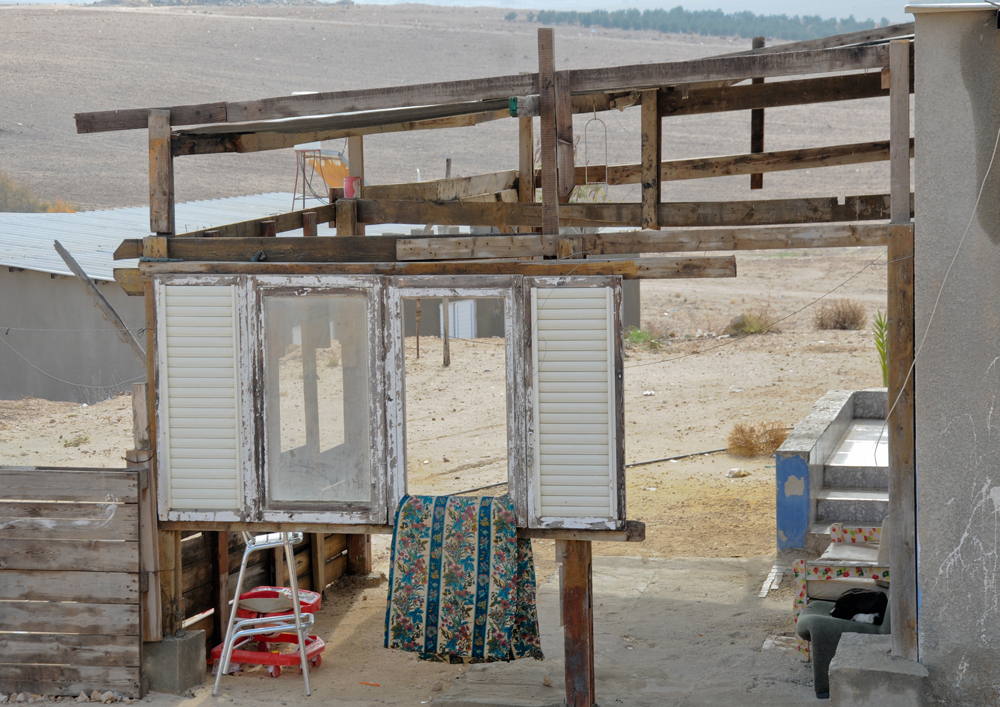 Of the 20 people who attended the opening, a few were from al-Araqib. One man Azez Al-Araqib explained how the repeated home demolitions have destroyed the village’s once sustainable local economy. Before 2010, he said the approximately 500 people living in al-Araqib were employed and many produced their own food for sale. Today, villagers work on a neaby kibbutz and must buy food from the same farm.

In “Baqon,” some of the photographs are portraits of demonstrators holding protest signs, while others are of village children, eyes fixed at the viewer. In one photo, four kids, all looking in different directions, sit atop the ruins of a demolished home in Wadi Alna’am. The image does not show it, but Madegam explained it was taken on Land Day in 2012, opposite a demonstration taking place in the village.

A few of his subjects are relatives of Madegam’s, including his mother’s uncle, “Sheikh Si’ah, one of the people most closely identified with Araqib,” he told Bronstein. Madegam stressed the importance of showing not just the residents’ struggle against displacement, but also aspects of Bedouin culture and daily life in his photographs.

A series of three photographs features one motif of the exhibition, the juxtaposition of young and old, and traditional culture next to modern society. The first image is a close-up of a young and old woman’s hands while they work on embroidery, each wearing embroidered dress. A man in the second photograph wears jeans, smokes a cigarette and presumably uses the store-bought sugar near the fire in his traditional Bedouin coffee. The last image shows “al-Sabab,” a Bedouin coffee pot, brewing atop hot embers. 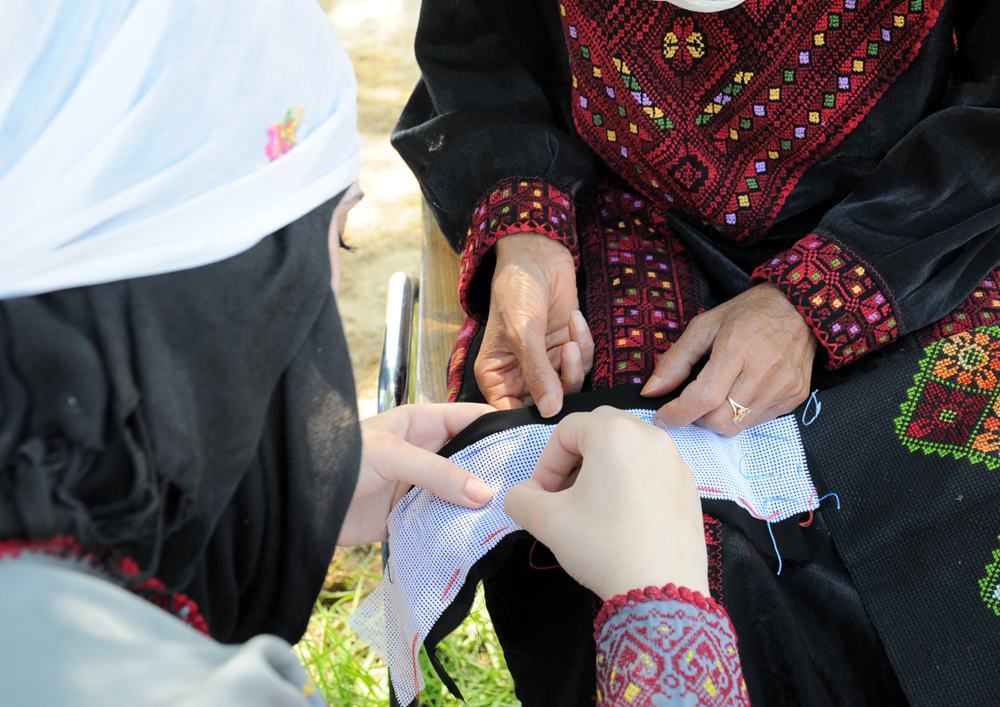 On another wall, two photos grouped together, displayed one above the other, depict an older Bedouin man’s wrinkled face, with sad, angled eyes, and the same man’s hands, clasped, holding prayer beads. The images were also captured during the 2012 Land Day demonstration.

Recent protests against the Prawer Plan have resulted in arrests and injuries. Further demonstrations in Israel are planned for August 1.

In addition to helping organize the demonstrations, Madegam said he would be shooting photographs on Thursday.

Related:
PHOTOS: Marking Three Years Of Demolitions In Al-Arqib
A visit to the evacuated village of Al-Araqib