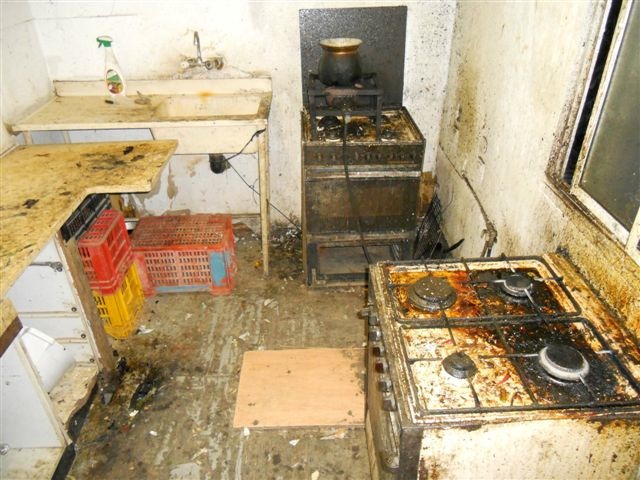 Walking into the migrant agricultural workers’ living quarters, the first thing you notice is that there is no privacy, no locks on the doors, and no closets or personal storage of any kind. The “rooms” are cramped with metal beds, bunk-bed style, for up to five workers. It’s summer in Israel, and the temperature inside is even more unbearable with heat radiating down from the tin roof. Working in the fields for up to 15 hours under the sun, the workers face an obstacle to even shower. Forty exhausted workers wait each night for their turn at one of the two working shower stalls. There is one working toilet for all of them.

Inside a warehouse, behind Moshav Sharsheret (an agricultural settlement) in the Netivot area of central Israel, migrant agricultural workers — mainly fromThailand as well as Nepal and Sri Lanka — are living in squalor, despite clear Israeli labor regulations that mandate employers provide them with safe and adequate living conditions.

Approximately 24,600 migrant workers in Israel are employed in the agricultural sector.

According to the Procedure of Employing Migrant Workers in Agriculture, which came into effect in 2012, and the Regulations of Proper Housing from 2000 (which are published by the Immigration Authority and Economy Ministry), Israeli employers must provide migrant workers with a proper living space, lockers and closets with locks for their personal possessions, blankets, heaters and access to a stove, washing machine and functioning bathrooms and showers – the number of which should be calculated according to the number of residents.

This is clearly not the case at Moshav Sharsheret, as well as at many agricultural workplaces in Israel.

On a recent Saturday, Kav LaOved staff and volunteers visited a group of around 40 migrant workers at the moshav. At the workers’ request, our group met them at an intersection leading to the main road of Moshav Sharsheret, from where they guided us to their place of residence. As we drove, we realized the workers lived outside the moshav, adjacent to the packing house and farm where they work.

There was no sign of any structure visible from the road or the entrance to the moshav. In fact, we could not have found the huge warehouse without their direction.

Inside, the ground floor space was divided into bathrooms and showers, an improvised kitchen (with a stove workers found on the street) and four bedrooms. Steep and unstable stairs led to a second floor with seven more bedrooms.

One of the workers showed us small rooms containing four or five beds stacked and crowded together, with no closets or lockers for personal storage. Consequently, clothes were strewn throughout the warehouse. All 40 workers shared one functioning bathroom stall and two working showers. Instead of glass windows, there were holes in the walls covered with cardboard and masking tape. Workers said they found the broken washing machine in the moshav, and were unsuccessfully trying to repair it. As we toured the space, one worker told us, “We keep on asking the employer to fix the toilets and the showers so we can all have a decent situation, and he keeps saying, ‘Tomorrow, tomorrow…'”

In the bedrooms we saw old, used blankets and a few small heaters — not enough to heat the entire space. Furthermore, the entire warehouse is left open day and night, with no option of locking it. As the walls do not reach the ceiling (due to the design of the warehouse’s roof), the workers explained to us that the place is always flooded and freezing in winter. In the summer, it is scorching hot, as the roof is made of tin. This is hard to imagine in Israel: no air conditioning at all, and room temperatures even higher than normal due to the tin roof.

These living conditions are not acceptable by any means, legally or morally. Sadly, this is not the only region in Israel with migrant agricultural workers living in substandard, improvised housing. In another visit to a moshav in the Sharon area, workers were living in a converted chicken coop. In the Hefer Valley area, the employer had rooms built into a tractor shed. In this instance, the workers lived in the shed, with the tractors left outside their ‘bedrooms.’ In all of the cases, the migrants’ living spaces are always in the farms’ backyards.

Fifteen to 20 percent of these workers are women. Usually a female worker will be the only woman in the location, living among a group of male workers. Because there are no separate bathrooms for women, she will probably wait until all the men have finished showering before taking her turn, fearing sexual harassment, abuse or worse. We have also received many complaints from women that they are expected to clean the farmer’s house, or even those of his family and friends, and are sexually harassed in their private homes. Though we know Thai women are coming to Israel under agriculture visas, it is unclear if they are really doing agricultural work here, or if the visas are being used for other jobs (i.e. domestic work, massages, sex work, etc.).

These workers come to Israel for five years, an adequate period of time for the employer to provide them with proper housing in permanent structures. It is not too much to ask that employers follow the Regulations of Proper Housing. The Immigration Authority has already defined what a proper residence is and the procedures to enforce the law exist: if employers do not comply, they are fined and their employment permits are revoked. Kav LaOved has made numerous complaints to the Immigration Authority and the Economy Ministry and received no responses. Employers must abide by the regulations, and if they refuse to do so, the Immigration Authority must be responsible for enforcement.