Two Nakba-themed events were organized by groups you’d least expect, suggesting that the legacy of the Palestinian catastrophe has ventured beyond Palestinian and leftist circles. 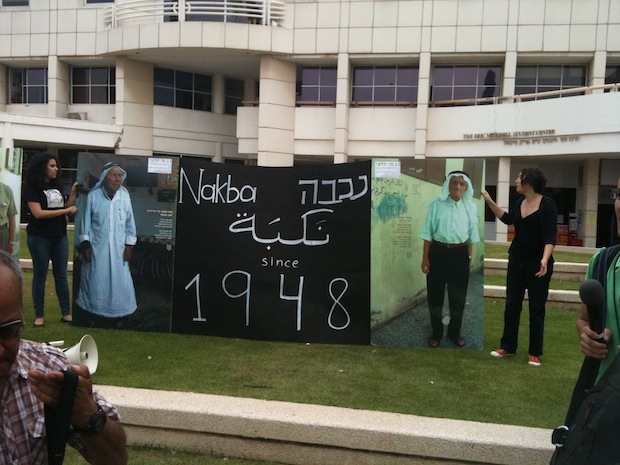 Until a few years ago, inside Israel Nakba Day was marked primarily on Independence Day. It was a family and community tradition among internally displaced Palestinians going back to the days of the military government. After the Oslo Accords it developed into large, popular political demonstrations.

Three years ago, Tel Aviv University students started holding a memorial ceremony on Nakba Day itself, May 15. The event created a huge scandal and the mainstream media gave voice to supporters of the ceremony as well as to its opponents. It might have seemed, had we not known better, that half the population was in favor of publicly commemorating the Nakba and that the other half was against it.

Other organizations had already been marking Nakba Day, but the students raised the bar for memorial activities in the public sphere — at an Israeli university and on the land of Sheikh Munis, a Palestinian village destroyed in 1948, which they made sure to highlight. Since then, Nakba Day has become more and more central in activities memorializing the disaster that took place in the country in 1948.

This year, alongside the various Nakba memorial activities are two events that do not mark the memory of the Nakba, but have appropriated the name of this great tragedy for themselves. Taking a closer look at those events can teach us a thing or two about the way the Nakba discourse has developed in Israel.

The first is called “The Great Nakba: Riots, Deportation and Displacement of Jews from Arab countries.” It is being organized by Arab Jews (we doubt whether many of them would define themselves as such) and will take place in south Tel Aviv. The headline of the event and the titles of the scheduled talks suggest that the occasion will address the loss of Arab Jews who were uprooted from their countries during the early years of the State of Israel, as well as the impact of the establishment of the state.

Alongside Nakba Day, it appears that the title, “The Great Nakba,” is actually saying that “our Nakba is bigger than yours.” The event organizers are, therefore, well aware of the Palestinian Nakba and are seeking to prove that Arab Jews paid an even more dreadful price than the Palestinians. One of the lectures also aims to show that the Mufti of Jerusalem, Haj Amin al-Husseini, advanced a “campaign of incitement that led to the deportation” of Jews from Arab countries.

The second event is known simply as “Nakba Now,” except that its logo is designed to look like that of “Peace Now.” The exhibition consists of satirical, right-wing political cartoons that are being displayed at the Gula Club in Petah Tikva. One of the creators, Or Reichert, sounds apologetic: “When I say ‘Nakba now’ I don’t mean to say that they will have a catastrophe or anything like that, I just want to burst the balloon of the lie of the Palestinian Nakba.” He notes that many on the Left have adopted a discourse on the importance of recognizing the Nakba, and he wants to oppose this by way of caricatures.

One can argue about the quality of their humor, and in our opinion at least one of the cartoons is tainted by anti-Semitism, but one thing is clear from the exhibition: it recognizes the centrality of the discourse about the Nakba in Israel. In this sense it is an own goal. What they attribute to the left in terms of adopting the discourse about the Nakba is actually embodied in the presentation of their exhibition. The “Peace Now” of our times, a red flag in front of Israeli nationalists, are the leftists who are now working to recognize the Nakba.

In 2012, after the above-mentioned ceremony at Tel Aviv University, Prof. Adi Ophir wrote:

“If a major distinguishing feature of the difference between the radical left and the moderate left in the 1980s and 1990s was the refusal [to serve in] the territories, today it is found in their position on the question of the Nakba. You bear great responsibility for this sublimation of the discourse. Even left-wing activists who still cling to the vision of two states and oppose the return of refugees to the ’48 territories, arrive at their views after ‘passing through’ the Nakba. Their perspective is formulated ‘despite the Nakba.’ For them, accepting the results of the Nakba safeguards the Israeli regime as ‘Jewish and democratic’, which means that they connect their political preference to the question of rule and understand that their position as members of the Left obligates them to touch on the question of the regime and the open wound of its establishment. The Nakba is not just a chapter in ‘their’ story that is pointless to deal with, but rather a problem that requires a conclusion.”

Perhaps it is no coincidence that the two population groups organizing Zionist events under the heading of the Nakba, close to Nakba Day, are not from the historic Israeli center of Mapai and Labor. Ultimately it is those groups that created the Nakba and it will probably be hardest for them to recognize their historical responsibility for it. The political right and Arab Jews are at least ‘liberated’ from the burden of historical guilt and they therefore may lead the way to a change in the recognition of the Nakba and, who knows, perhaps recognize the right of return for Palestinian refugees. Because the key that they still carry — symbolic or real — is also the key to a future of peace in the country.