As Gaza teeters on the brink, a new Israeli offensive could spell catastrophe for the blockaded strip. One Gazan reminds us who foots the bill, each and every time.

“You don’t have to worry – it’s only thunder, not an explosion,” my sister assured me. We are trying to sleep for the fifth time tonight, after our slumber was repeatedly interrupted by the sound of Israeli rockets and thunder. After failing to distinguish between the two, we turn to local radio stations to find out what was actually happening.

Winter is special everywhere, and Gaza is no exception, of course. For the past week, as the violence escalated between Israel and Gaza, I could do nothing but recall the days of Cast Lead and Pillar of Defense. They are almost the same: extreme cold, no electricity, non-stop news broadcasts and crying children. 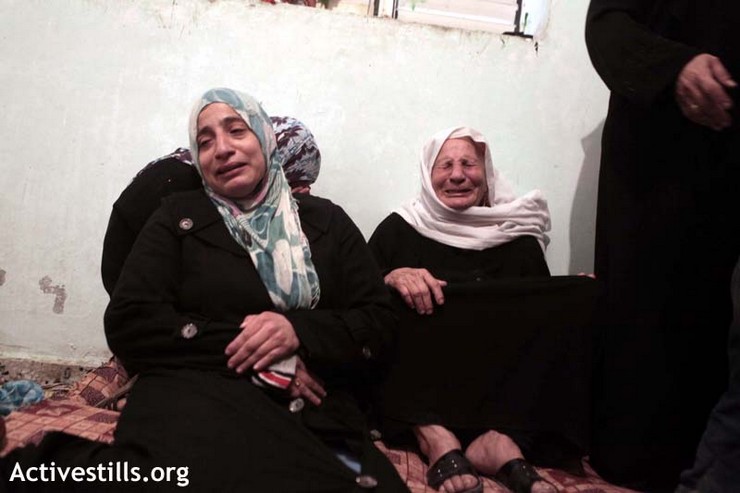 Palestinian women relatives of Matar Abu Al-Atta, killed the day before by an Israeli military attack, mourn during his funeral in the al-Shoja’iya neighborhood east of Gaza City , November 11, 2012. (photo by: Anne Paq/Activestills.org)

And while Israeli airstrikes are not targeting my neighborhood,  I cannot remove myself from the violent atmosphere. I wake up every time there is an explosion, I hear the drones circling the sky above my head, as well as the ambulance sirens which mean I have to make sure that none of my relatives, friend or colleagues have been hurt. Most importantly, I have to calm down my nephews and nieces, who think that “death is coming to kidnap” them.

I have never been wounded in any of these Israeli attacks, yet I have to admit that I have been mentally traumatized for the last decade. My head is always about to explode from thinking about how this insane situation might end. I think of the young generation who were born, live and grow up under fire. I never stop wondering whether getting married and bringing children into this miserable situation is the right decision.

As Gaza teeters on the brink, a new Israeli offensive could spell catastrophe. The Rafah crossing is almost always closed, Israeli commercial crossings are affected by the security situation, the blackout crisis has no imminent solution, Palestinian reconciliation is going nowhere, peace talks are at a standstill and the international community is silent. As usual, it is the residents of Gaza who must pay the price.