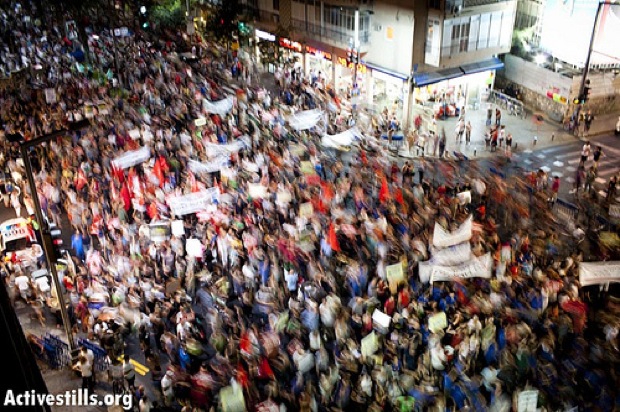 With September quickly upon us and reports coming out that the army is training settlers in the West Bank for “Operation Summer Seeds” (the name given to the army’s plan to respond to potential “mass disorder” during Palestinian demonstrations in September), the tent protest movement, almost two months old, is making one final push for a large demonstration this Saturday night before the country’s media becomes entirely consumed by the September events.

What is being called the “million-person march” is expected to take place in Tel Aviv, Jerusalem, Haifa and Beer Sheva, and is being heavily marketed on Facebook and through other social media. The J14 organizers have set up a “situation room” in an apartment next to the tent encampment on Rothschild Boulevard to encourage people to get involved. It is manned 24-hours a day by volunteers and although leaders continue to claim that the show of large numbers is not what matters, they are pushing every person to bring 5 friends to the protest on Saturday night.

There have also been promotional videos going around online, one especially dramatic one which asks viewers to imagine a scenario in which the protest movement dies out (Hebrew). In the video, there are hypothetical headlines in major newspapers portraying a sort of social justice armageddon, starting with the forceful evacuation of all tents on September 4th, moving on to the privatization of healthcare and annulment of minimum wage, and ending with the social gaps in Israel surpassing those in the US next summer 2012.

Even if the turnout this Saturday exceeds the largest of the tent protests that saw 300,000 people in the streets across the country, critical questions remain:

1) What will happen to the tent cities themselves?

2) Will the leaders of this movement form a national entity that will continue to function and will a political party come out of it?

3)Most importantly, (if and) how will the protests translate into policy changes?

None of these answers are clear, although there have been reports the tent cities will be taken down following Saturday’s march and efforts at establishing a nation-wide leadership have so far been mired in disputes regarding leadership and the decision-making process, and the question of disproportionate power held by original tent organizers. As for reforms, the Trajtenberg Committee appointed by the prime minister, which many tent protestors have disqualified as partisan, has been taking suggestions from the public and promises to produce recommendations before the holidays (end of September).

I actually overheard a J14 activist today telling someone that the first phase of the protest – taking tents into the street to wake up the public and get media attention – was very successful but is now over.  Now is the time to do the hard work of sitting on your computer and in meetings in order to make sure that the protests translate into changes in policy.