Israel demolished 143 Palestinian structures in August, the highest such total in five years. The wave of demolitions came amid severe heat waves and has left children homeless as they start the new school year. 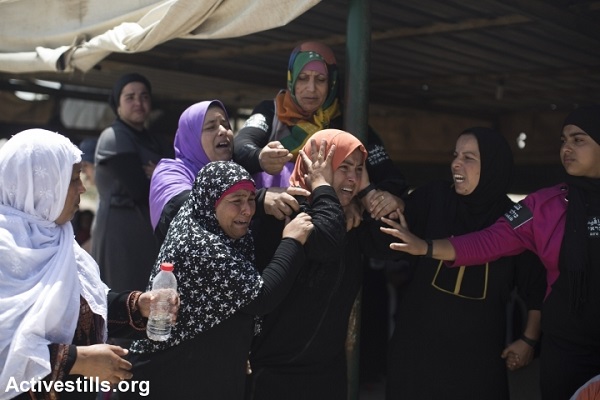 Bedouin women cry as they watch their house being destroyed during the demolition of the unrecognized Bedouin village of Al Arakib in the Negev desert. Israeli authorities have demolished the village over 70 times since 2010, June 12, 2014. (Oren Ziv/Activestills)

Israel demolished 143 Palestinian structures in the West Bank and East Jerusalem in the month of August, the highest such total in five years, according to statistics released by the UN Office for the Coordination of Humanitarian Affairs in Occupied Palestinian Territory (OCHA-oPt). The wave of demolitions has displaced nearly 200 Palestinians, many of them children. Some of the highest concentrations of demolitions occurred during a record-breaking heatwave that swept the country and displaced children are now starting their school year homeless.

The majority of demolitions have taken place within Area C of the West Bank, defined as being under full Israeli security and administrative control. The region’s Bedouin communities have been the primary targets, as part of a broader policy of dispossession and displacement. Many of the affected belong to one of the 46 communities at risk of forcible transfer under Israeli government plans. Several of the demolitions took place within the context of the ongoing threat of expulsion for Palestinians living in the Ma’ale Adumim and E1 areas of the West Bank, amid Israel’s plans to create a contiguous territory between Jerusalem and Ma’ale Adumim.

The Bedouin of the Jordan Valley have also been targeted by the recent wave of demolitions. In addition to having their homes destroyed, they are also subjected to Israeli military training exercises and the designation of their land as a firing zone, archaeological site or nature reserve. All these activities displace Palestinians and officially bar them from accessing their own land.

A Palestinian child walks on the rubble of a demolished mosque, in Khirbet Twaiel, West Bank, April 30th, 2014. On the early morning of April 29th, Israeli bulldozers demolished a mosque, three houses, two agricultural barracks and a water tank in Khirbet Twaiel in Aqraba village, south of Nablus. (Ahmad Al-Bazz/Activestills)

The spokesperson for Israeli human rights NGO B’Tselem, Sarit Michaeli, told +972: “While we’re not privy to the internal discussions of the Civil Administration and the Coordination of Goverment Affairs in the Occupied Territories (COGAT), it seems pretty clear that this wave of demolitions isn’t just some low-level decision. Considering most of the demolitions were in Bedouin communities, the communities themselves view it as pressure to force them into relocating to the new Bedouin reservations being planned.”

The high number of demolitions provoked a strongly-worded press release from the United Nations earlier in August, calling for “an immediate freeze on demolitions in the West Bank.” The statement noted that the majority of those that Israel has rendered homeless are already refugees. The Director of UNRWA Operations in the West Bank, Felipe Sanchez, is quoted in the statement as saying that “[m]any of these refugee families have now been displaced four times in the last four years.”

Currently, only around one percent of land in Area C has been planned for Palestinian development. Israel justifies its demolition of Palestinian structures by arguing that they have been built without a permit. This explanation fails to take into account that it is almost impossible for Palestinians in Area C to acquire the necessary permission to build.

Furthermore, such demolitions breach Israel’s responsibilities under international humanitarian law: as the occupying power, Israel is forbidden from forcibly transferring civilians unless it is for their own safety, or in the event of military necessity. Israel is also obligated to ensure the welfare of those whose territory it is occupying.