A Palestinian is attacked by a famous settler. Police detain the Palestinian, but not the settler – because it’s already Shabbat. 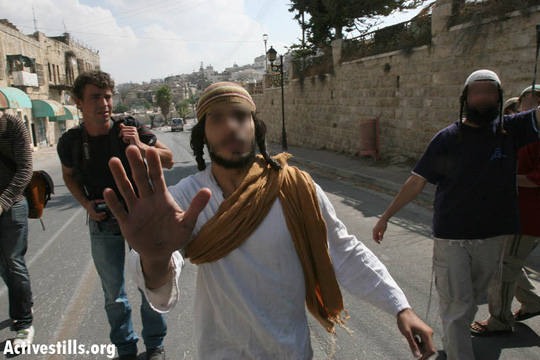 Jewish settlers in Hebron [illustrative photo] (Yotam Ronen/Activestills.org)
At the beginning of February, “I.”, a resident of Tel Rumeida, was sitting in his yard with some friends. This was a Friday, twilight was setting in, and I. was sitting with his back to a path servicing the settlers. “B.”, a famous settler with a long history of convictions and a longer list of detentions by the police, was passing by, and was identified by “I.” A small number of other settlers accompanied “B.”

As “I.” would later tell the police, he thought that “B.” would pass his house with a few curses – that he would “curse and go on his way, as usual,” as he put it. That’s life in occupied Hebron (Al Khalil) for you. Not this time. “B.” went into “I.”‘s yard, while the accompanying settlers stayed outside. “I.” Demanded “B.” leave, and in response the latter immediately punched him in the face, and kept on attacking him.

“I.” refrained from hitting the invader back: “Even though I know that by law, I may defend myself from an attacker who enters my yard,” he would say later, “I didn’t strike back because I knew B. would use it against me.” “I.” managed to push “B.” out of the yard, and shouted to the soldier in the nearby post.

As the soldier moseyed over, some of the settlers who accompanied “B.” began stoning “I.” and his friends. They knew, of course, they stood a snowball’s chance in hell of being indicted for attempted murder. They threw stones at the Palestinians with a soldier in plain sight, knowing this stalwart of the rule of law won’t do anything. They’re Jews, after all. As the incident unfolded, “I.” called the police and reported the stone-throwing.

As the soldier watched, “B.” kicked “I.”, while telling the soldier: “You see? He’s kicking me.” The soldier, naturally, arrested “I.”, and “B.” and his gang sneaked off. The detainees were suspected of throwing stones. When “I.” insisted that “B.” and the settlers must also be detained, since he reported the incident, the policemen shrugged: “It’s already Shabbat'” they told him, “We can’t take “B.” and the settlers.”

This particular incident ended relatively well. “I.” was interrogated under suspicion that he attacked “B.” – who, as you recall, didn’t bother to press charges but sauntered off – but told the investigator that his friends recorded the incident on video. Upon examining the video, the interrogator dismissed “I.” on bail, but even though he told I. he would not supply him with the number of the complaint.

The critical words here are, however, “It’s already Shabbat, we can’t take ‘B.’ and the settlers.” This is how a vanquished force, which lost all faith in its ability, sounds. In Israel, the police do work on Saturdays. If a noted felon in Haifa would have assaulted a man and escaped, it’s hard to believe the police would say “well, it’s a Saturday, we can’t detain him.” But coming to deal with B. on his home turf, the cops know they are moving in hostile territory, and that such an arrest would cause a huge mess, and who really needs all these troubles for the sake of some Palestinian who was merely assaulted and stoned in his own yard? The police know it is the settlers who set the rules in Hebron and Kiryat Arba, and that they themselves are there only to provide the façade of the “rule of law.”

The police know and understand this; the Israeli public prefers to stay blissfully unaware.