Who do you turn to for redress when your city is occupied by a military force that gives violent settlers almost complete impunity? The roots of segregation in Hebron and Baruch Goldstein’s massacre of 29 Palestinian worshipers. 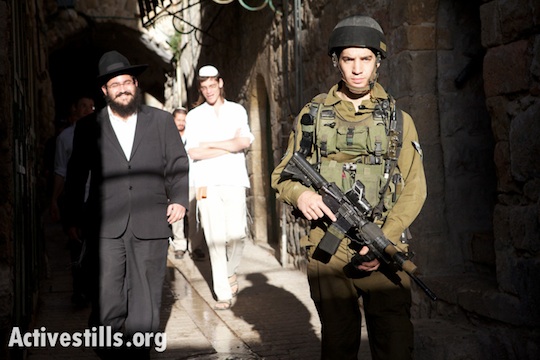 An Israeli soldier escorts a group of settlers during a tour of Hebron’s old city, February 20, 2010. (Photo by Activestills.org)

“How can you tell the difference between a Jew from Hebron and other Jews?” the white-bearded tour guide posed in American-accented English on my first visit to the city six years ago. “The Jew from Hebron doesn’t carry a gun,” he continued. “They made sure the Arabs know not to mess with them.”

The guide’s animated narration crackled through the PA system of a packed luxury bus as it descended into Hebron. The group of right-wing Jewish-American benefactors I was accompanying peered out the windows as the scenery quickly went from the suburban landscaping of Kiryat Arba to the shuttered, decrepit and abandoned storefronts of Hebron’s Old City, a veritable ghost town.

Hebron is not like other places in the West Bank. There is no other place where Israeli settlers have taken over the entire urban infrastructure of a Palestinian city. Hebron is a unique occupation in and of itself, an inescapable daily reality of segregation, violence, military control and civilian terror — a microcosm of everything that feels wrong and terrifying in the world.

Imagine, if you can, in an urban area of tens of thousands of Palestinians, placing 700 Israeli settlers and an almost one-to-one ratio of soldiers to guard them. We are not talking about the harassment of lone shepherds on beaten hillsides as the occupation’s violence manifests itself a few miles away.

The irony of today’s Hebron is that it is a city, harkening back to the days before Israel’s establishment, that was a place where Jews and Palestinians largely coexisted. That fragile reality was shattered by the 1929 Hebron Massacre, in which a Palestinian mob killed 67 Jews. Those Jews who survived fled en masse.

Fifty years later, Jews returned to the holy city, home to the tombs of the patriarchs and matriarchs of the Abrahamic religions. Another fragile coexistence returned, albeit one under the shadow of the colonial military conquest that followed the Six Day War and subsequent Jewish settlement in the West Bank.

That return to less-than peaceful coexistence, too, was shattered by a massacre — this time of Palestinians.

Twenty years ago today, Dr. Baruch Goldstein, an American-born Jewish physician and a follower of Rabbi Meir Kahane, walked into the Muslim side of the Cave of the Patriarchs, the Ibrahimi Mosque, with four magazines and an automatic assault rifle and opened fire during morning prayers. He killed 29 people and wounded 125 before being beaten to death by the surviving worshipers.

In response to the massacre and the reactive street violence that bubbled up in its wake, the Israeli army made a brash decision to shut down the center of the city — Shuhada Street, which abuts the Cave of the Patriarchs. That is, Palestinians could no longer drive down the major commercial thoroughfare. It remained open to Jews.

A few years later, in the midst of the renewed violence of the Second Intifada, the street was entirely closed to Palestinian foot traffic. Over 1,800 shops were either forced to shut down or quickly went out of business.

Shuhada Street became a buffer zone of sorts. In the language of the IDF, it was to become “sterile” of Palestinians — a ghost town. Today, those Palestinians who are unlucky enough to live on Shuhada Street cannot enter or exit their homes through their own front doors; some have been welded shut by the army.

The army rewarded the Jewish community of Hebron, from whose ranks the perpetrator of the Ibrahimi Mosque massacre came. The victims were punished. Collective rewards, collective punishment.

In the two decades since, Hebron’s Jewish settlers have become notorious for violently harassing their Palestinian neighbors, all under the watchful eye and acquiescence of the IDF. Some Palestinian residents in the seam zone on and around Shuhada Street have literally built cages around their homes to protect themselves from the violent settlers. The souk in Hebron’s Old City is covered by metal netting to catch the bricks, urine and other objects Jewish settlers regularly throw onto Palestinian merchants and passersby.

“There is not one family or home [on Shuhada] that hasn’t been attacked,” says Abed el-Rahman, a Palestinian university student who has lived his whole life on Shuhada Street.

While large attacks have tapered off in recent years, harassment and lower-intensity violence remains a mainstay. To be clear, inescapable daily low-level violence is in and of itself, the occupation.

Abed’s family has hundreds of stories of attacks and harassment by settlers and the army, he explains. Sometimes the settlers throw stones at his home, “really huge stones that could kill.” Recently, they threw such stones into his family’s courtyard. Luckily family was inside at the time and nobody was hurt, Abed says, but describes how their furniture and floor tiles were shattered in the onslaught.

A few years ago the entire country of Israel was given a taste of the repulsion and indignity that is Palestinian life in Hebron when a now-infamous video of a settler woman, howling “Sharmouuuuuuta” (“whore” in Arabic) at a young Palestinian woman through a cage, made it onto the nightly news. “Sit in the cage,” the settler woman derided as a soldier stood by doing nothing.

The video was an accurate reflection of Palestinian reality in the city: a life in captivity, subject to humiliation and violence by settlers and soldiers alike, and with no one to turn to for help.

“Just like anyone else in the world,” Abed says, the Palestinian residents of Shuhada Street just want to live peacefully, “with dignity. And people here are living without dignity.”

The tragic story of Hebron is one of history repeating itself. Like the exile of the city’s original Jewish residents 85 years ago, it was another a massacre, an act of terror that created the decades of injustice and humiliation that the city’s Palestinian residents live under today.

The linkage couldn’t be clearer.

“If Goldstein were today to rise out of his grave, there would be none happier than him about the reality in Hebron,” says executive director of “Breaking the Silence” Yuli Novak.

What the tour guide told me six years ago was certainly an exaggeration; Hebron’s Palestinian residents do fight back from time to time, and I’ve seen some settlers carrying guns. But the message was born 20 years ago today, when an act of terror gave rise to a reign of terror.