Vittorio Arrigoni, an Italian Palestine solidarity activist and journalist, was killed this evening after being kidnapped hours earlier by a little-known fringe Salafi group in Gaza. It was the first kidnapping of an international in Gaza in the nearly four years since Hamas took control. 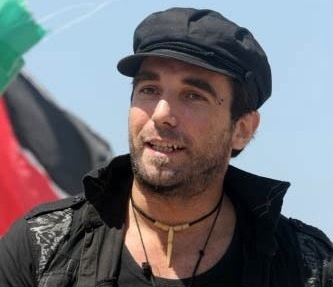 I met Vittorio several times when I was in Gaza last year. I first met him when I accompanied him and several other activists to visit Palestinian families who had been injured in a series of Israeli airstrikes in the mid-Gaza area. He was a burley, bearded man, dressed in black and smiling wide. Talking politics the whole way, we shared the front seat of a van on the ride from Gaza City down to Deir Al-Balah. He had a tattoo of the word “resistance” (“muqawama”) in Arabic on the inside of his right arm.

He was a man who lived and died to express his solidarity with Palestinians. He was big-hearted and he was brave, twice participating in blockade-defying sea voyages to Gaza, three times jailed by Israel for his activism.

He embodied a certain spirit of the European anti-fascists of the 1930s and ’40s, who went to fight and die as partisans in Italy and Spain. “I come from a partisan family,” he once told an interviewer. “My grandfathers fought and died struggling against an occupation, another occupation. It was the Nazi-Fascist one. For this reason, probably, in my DNA, there are particles that push me to struggle.”

His murder is an outrage and an enormous tragedy.

Those who knew him better than I will write better tributes. I’ll quote now from In Gaza, a blog written by Eva, one of Vittorio’s ISM colleagues:

Stay human, he always said. And so was the title of his book on the Israeli massacre of Gaza in 2008-2009. Stay human.

Viks blog, Guerilla Radio, gave voice to Palestinians who have strong voices but are denied the microphone.

During the Israeli war on Gaza, we all worked together, riding in ambulances, documenting the martyred and the wounded, the vast majority (over 83%) civilian. Vik was always on the phone, Italian media taking his words and printing them for the public to see.

Aside from the loss of a compassionate, caring human, activist, and friend, I am saddened by the group that did this. Surely they knew Vik was with them, for them. But in every society, including my own, there are extremists, people who act with misguided guidance.

Vik was there, among the war casualties, among the on-going martyrs unspoken in the corporate media, celebrating Palestine’s beauty and culture, dancing Dabke at my wedding celebration.

He was there to joke with us, to counsel us, to smoke shisha by the sea…He wrote the truth, spoke the truth, stayed human.

Vik, my brother, allah yerhamek, bless you for your humanity and your great contribution to Palestinian justice. I will miss you, your smile, your humble, fun personality.

And here, via ISM, is the video from which I quote above:

Jared Malsin is an American journalist and former chief editor of the English section of Ma’an News Agency. This piece originally appeared on Jared’s blog, and is re-posted here with the author’s permission.