Abdullah Abu Rahmah, one of the leaders of the 11-years-old Bil’in protests against the separation wall, has been arrested after confronting Border Police over the dispersal of the cycling event.

Text and pictures by Oren Ziv 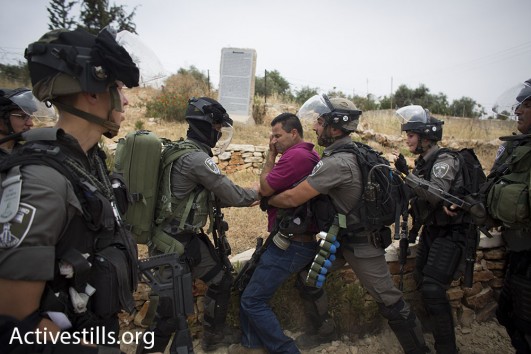 Abdullah Abu Rahmah being arrested by Border Police in Bil’in, May 13, 2016 (Oren Ziv/Activestills)

Abduallah Abu Rahmah, one of the leaders of the Bil’in protest movements, was arrested on Friday during a bicycle race in the West Bank to mark the 68th anniversary of the Palestinian Nakba.

Hundreds of Palestinian and international cyclists participated in the so-called “return ride” that kicked off in Ramallah and ended in the village of Bil’in, where grassroots protests against the occupation and the separation barrier have taken place weekly over the last 11 years. 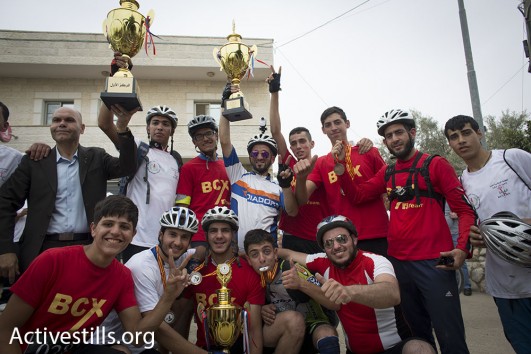 When the race ended and the participants gathered in front of the separation wall for the awards ceremony, a Border Police unit emerged from the nearby settlement of Modi’in Illit and told the crowd, which included numerous journalists, to disperse. 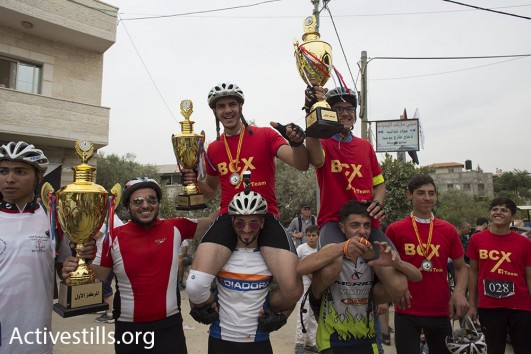 Participants in the Nakba Day bicycle race in Bil’in, May 13, 2016 (Oren Ziv/Activestills)

For the past year, the army has prevented protesters from approaching the wall and has blocked their passage in the village outskirts. This week, the protesters arrived two hours earlier than usual, and were met with stun grenades and tear gas canisters that drove them back to the village.

Almost every Palestinian protest in the West Bank is forcefully dispersed by Israeli troops, who declare the sites (including Bil’in) as a closed military zone. But the people of Bil’in are yet to be discouraged.

After the gathering was dispersed, a number of cyclists rode past the IDF and Border Police contingent that was stationed on the wall’s old trail, before it was relocated following a 2010 High Court injunction. 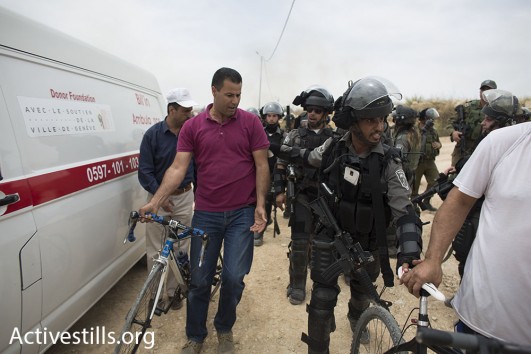 One of them was Abu Rahmah, who got off his bike and asked the commander of the platoon why the awards ceremony was banned. 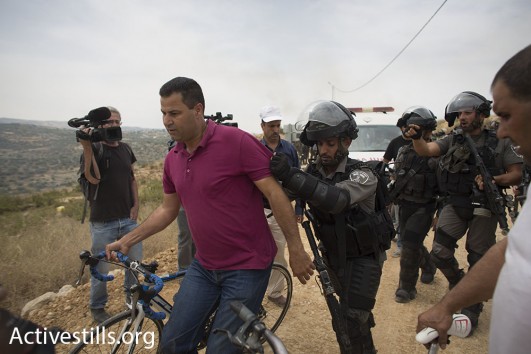 “It’s not a protest, our children have the right to ride their bikes, just like Israeli kids,” he told the officer, who in turn instructed him to leave and said he risked being arrested.

But Abu Rahmah insisted: “It wasn’t even a protest, why did you fire tear gas on us?” 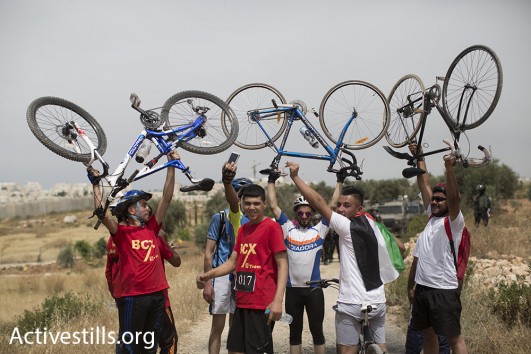 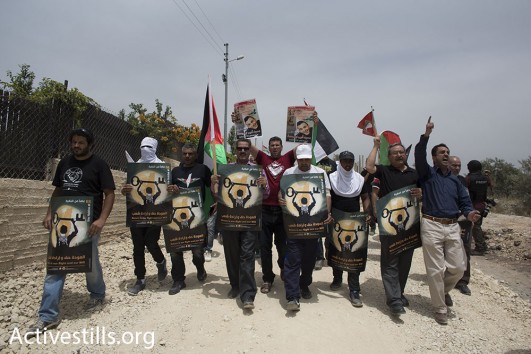 At this point several Border Policemen nabbed Abu Rahmah and arrested him, while telling the photographers present at the scene that they’d better leave or get arrested as well.

An Israeli activist who passed by was also arrested, after she asked the officer why Abu Rahmah had been detained.

The two were questioned by West Bank police on charges of entering a closed military zone and harassing police officers. The Israeli activist is slated to be brought before a judge on Saturday evening. 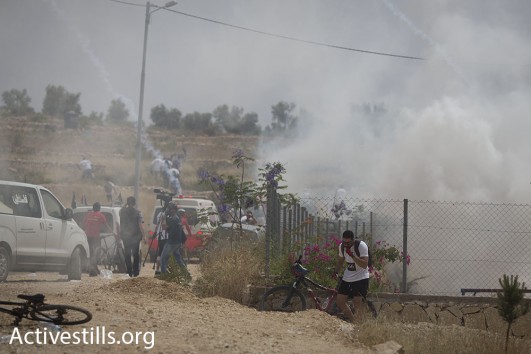 It is unclear when Abu Rahmah will be brought before a judge, and fellow villagers have expressed concern that he would be held in protracted custody because of his high profile and a previous suspended sentence.

Abu Rahmah has been deeply involved in the Bil’in protests for more than a decade. He was arrested several times and recognized as a “human rights defender” by the European Union.

Later on Friday, the awards ceremony was held in the village, and following the Friday prayer at the local mosque, dozens of Palestinian and international protesters started their customary march to the wall. The soldiers, still stationed where the wall used to be, responded by firing tear gas.

Israel Police has yet to respond to 972’s request for comment.